Who is on Chris Eubank Jr vs Liam Williams undercard? Fight night schedule for HUGE Cardiff bill this weekend
Advertisement 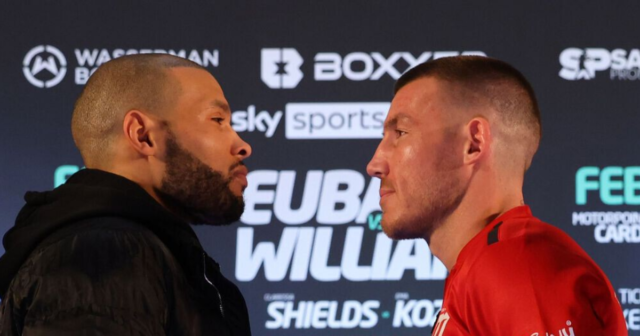 The British Boxing Board of Control suspended boxing in the UK all January to allow medics to prioritise their work with the NHS during the coronavirus pandemic. And now it’s back with a huge show in Cardiff.

Chris Eubank Jr and Liam Williams face off in Cardiff

Eubank Jr and Williams were set to fight in December, before an injury to Williams forced its postponement.

It was then set for late January before suffering a second postponement after the BBBofC’s ruling. Now they finally meet.

Eubank Jr, 32, has branded his opponent as a “keyboard warrior” ahead of the grudge match on Saturday.

He said: “It’s real for me. Is it real for him? He had a lot to say on social media over the last couple of years that he wasn’t able to articulate when I stood in front of him at the press conference.

“Maybe he isn’t real, maybe he is fake. He is a keyboard warrior, just like all the other guys. He has a lot to say with his thumbs, but when the time comes and he’s in front of the man he’s supposed to say it to, he backs down and I don’t respect that.”

Who is on the Eubank Jr vs Williams undercard?

Eubank Jr’s cousin Harlem is also in action as he continues his fledgling boxing career.

Sky Sports begin their coverage of the undercard from 7.30pm.

How the fighters compare ahead of this weekend

When is Eubank Jr vs Williams?

You will be able to watch every jab, duck and upper-cut on Sky Sports Arena.

Sky Sports get their coverage underway from 7.30pm.

If you’re not a Sky customer, you can watch by grabbing a NOW TV pass from £9.99.

SunSport will be running a dedicated live blog for this fight, so you don’t miss any of the drama.