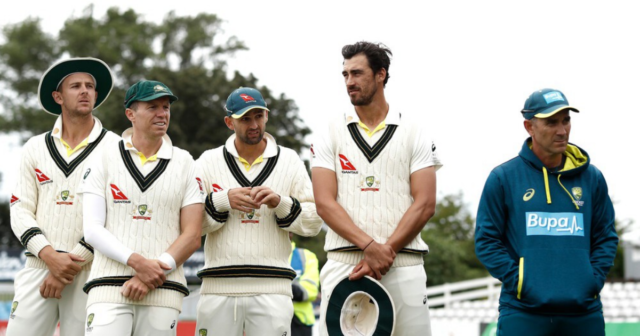 JUSTIN LANGER’S strained relationship with his Aussie players is under the spotlight once more after a bizarre online post.

There have been dressing-room claims about the Australia coach’s suffocating style.

And England, who already think they can pile the heat on under-pressure captain Tim Paine, will believe his sometimes erratic behaviour could be an area of weakness during the Ashes series this winter.

Yet Langer’s post on networking site LinkedIn — partially quoting Mind Platter, a book by Lebanese-Canadian activist Najwa Zebian that claims people should not alter their character in order to please others — suggests he does not intend to change.

He wrote: “Stay true to yourself.

“It is better for people to value you for who you are, not who you pretend to be.

“Who you are lasts a lifetime; who you pretend to be changes like the change of seasons.

“BE YOURSELF. YOU ARE UNIQUE and YOU ARE SPECIAL.”

Langer is currently in quarantine at a hotel in the UAE with his team ahead of the Twenty20 Cricket World Cup.

It is the first time he has been in camp with the squad since his emergency meeting with senior players in July about his intense methods.

Langer is a big fan of motivational quotes and quirky actions, such as asking players during the 2019 Ashes to walk barefooted around the outfield to ‘harness the Earth’s natural energy’.

He said: “He has strong values and morals and he sticks to them unwaveringly.

“He’s copped criticism but he’s listening to the feedback while in quarantine.

“Everyone respects that he’s listened and is doing whatever he can to suit the needs of the team.”