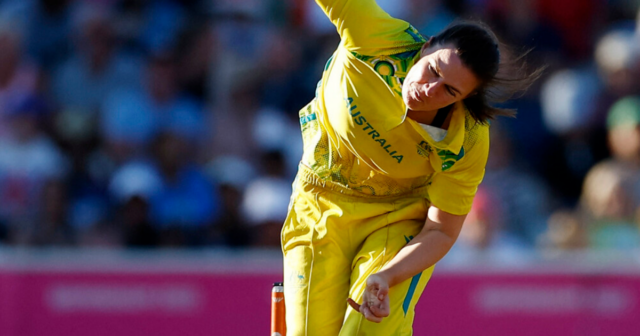 AUSTRALIA’S women’s cricket team have been blasted over their decision to field a Covid-infected player in their Commonwealth Games victory.

Meg Lanning’s all-conquering side beat India by nine runs in the T20 final at Edgbaston on Sunday.

Not only are they now the inaugural Commonwealth winners, but they are also the reigning T20 and ODI World Cup champions.

Prior to their gold medal clash against India, Tahlia McGrath returned a positive test, but she was cleared to play by the International Cricket Council and the Commonwealth Games Foundation.

Should the match have been held in her native country, the 26-year-old wouldn’t have been able to feature, but England have more relaxed laws.

In bizarre scenes, McGrath did not line up alongside her team-mates for Australia’s national anthem, while she had to sit the stands wearing a mask during their batting.

Though she batted at No4 without a mask, where she scored two runs off four balls before bowling two overs, while she also took a catch in the fourth over.

But despite warning her team-mates not to celebrate with her after taking the wicket, she joined in on the jubilant scenes after Australia were crowned Commonwealth champions.

Speaking after the victory, bowler Megan Schutt said: “It was so weird. We didn’t want to get in trouble.

“We felt bad for Tahlia at the end there. At the end, screw it. If we get Covid, so be it.”

McGrath then returned to wearing a mask while standing on the podium to receive her medal.

Despite no rules being broken, Australia were criticised on social media for letting McGrath play.

Sports reporter Naveen Sharma tweeted: “Australians always preach about right or wrong but they forget everything when it comes to them.”

Meanwhile this fan posted: “This is strange. A positive test rules you out of contention. What if India refuse to take part on health grounds?”

This Aussie supporter said: “The team they played against should appeal to health organisation it’s highly dangerous and not legal to endanger others health.

“Australia would be up in all sorts if it was other way around especially if we lost.”

A third added: “So Australia can deny [Novak] Djokovic from playing in the Australian Open for not being vaccinated but will allow a Covid +ve [sic] person to play a cricket match?”

One then remarked: “Absolute rubbish! Shouldn’t be anywhere near others if she has it and India should refuse to play as a positive puts you out for everyone else. Why is it suddenly ok now?”

Did you miss our previous article…
https://www.sportingexcitement.com/cricket/moeen-ali-scores-englands-fastest-ever-t20-50-and-bairstow-smashes-90-as-south-africa-thrashed-at-bristol/