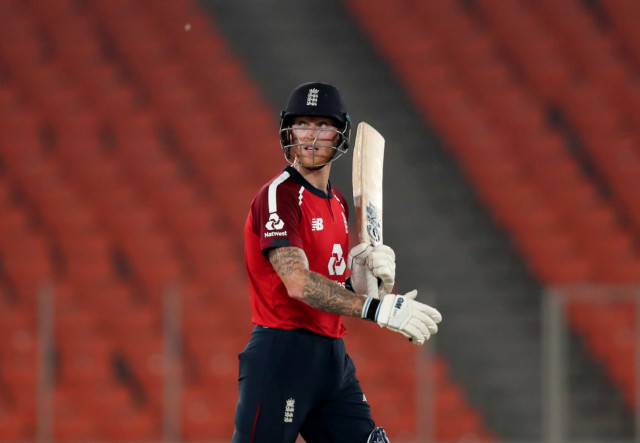 ENGLAND threatened at times to chase a target of 186 but eventually lost the fourth Twenty20 match by eight runs.

When Ben Stokes and Jonny Bairstow were batting aggressively, it looked as though England would hasten to a series-clinching victory.

But Bairstow was caught at point for 25 and then Stokes and captain Eoin Morgan were caught from successive balls by seamer Shardul Thakur.

Stokes batted superbly for his 46 from 23 deliveries but his dismissal – held at long-off from an attempted big hit – was the fatal blow for England.

Amazingly, Stokes has never scored a half-century in 33 T20 internationals for England.

Sam Curran, Chris Jordan and Jofra Archer all tried to swing the bat but it came down to England needing 23 from the final over.

Archer hit a six and a four and Thakur, suddenly looking under pressure, sent down a couple of wides. But Archer broke his bat attempting a big hit and the result became certain when Jordan hit the penultimate ball down long-off’s throat.

It was the first time in the series that the team batting first has won. With score 2-2, the decider is at the same ground in Ahmedabad on Saturday.

On the best pitch of the series so far, India posted the highest total after Morgan chose to field first.

Rohit Sharma lofted the first ball of the match from Adil Rashid over long-off for six but he was soon caught and bowled by Archer – a virtual copy of a chance Archer dropped in the previous match.

K.L.Rahul slapped a catch to mid-off and then Virat Kohli danced down the track to his fifth ball, missed and was stumped off Rashid for a single.

Suryakumar Yadav was playing his first international innings – he did not bat in his only previous match – and hooked his first ball from Archer for six. These young Indian batsmen have plenty of talent but no fear.

Yadav played superbly, producing audacious and thrilling shots. He was out for 57, caught at long leg by Dawid Malan.

There was some doubt whether Malan held the catch cleanly – his hands appeared to separate when they hit the ground – but the third umpire could not see enough proof in the replays to overturn the on-field umpire’s soft signal of not out.

It will lead to further debate that umpire’s should not be permitted to make soft signals to catches that are more than 50 yards away from them.

Rishabh Pant contributed 30 before being bowled by Archer attempting one of his flat-footed swats over mid-wicket. Archer finished with 4-33 and Mark Wood was again impressive with his high pace and took 1-25 in his four overs.

When England batted, Bhuvneshwar Kumar started with a maiden to Jason Roy and then Hardik Pandya conceded just two runs off the next over.

Jos Buttler, England’s match-winner 48 hours earlier, did not last long, skying a catch to mid-off as he aimed some aggressive over mid-wicket.

Malan struggled for fluency and was bowled attempting a reverse sweep while Roy, after a few beefy blows, holed out to deep mid-wicket.

Bairstow helped Stokes put on 65 in six overs for the fourth wicket but, after Bairstow slapped a catch to point, England’s run chase fell away.