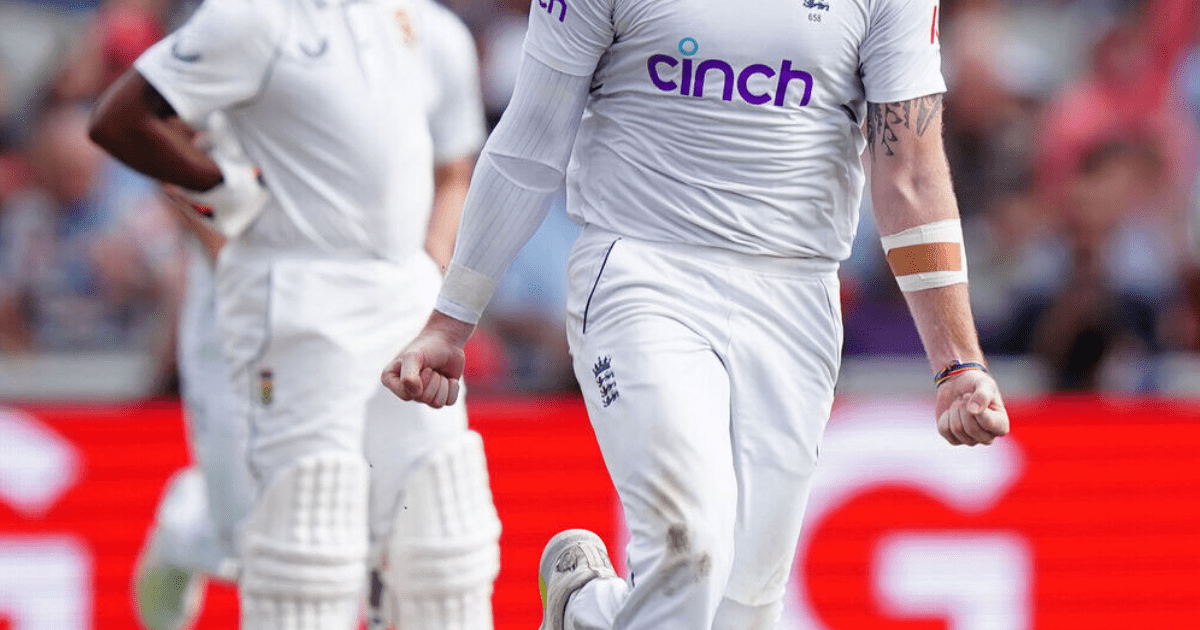 BEN STOKES conjured up more moments of magic – this time with the ball – as England secured a crushing victory in the Second Test.

With his shirt and trousers stained with sweat and dirt, Stokes hauled his body through an epic 14-over spell in which he captured the two wickets which transformed the day. 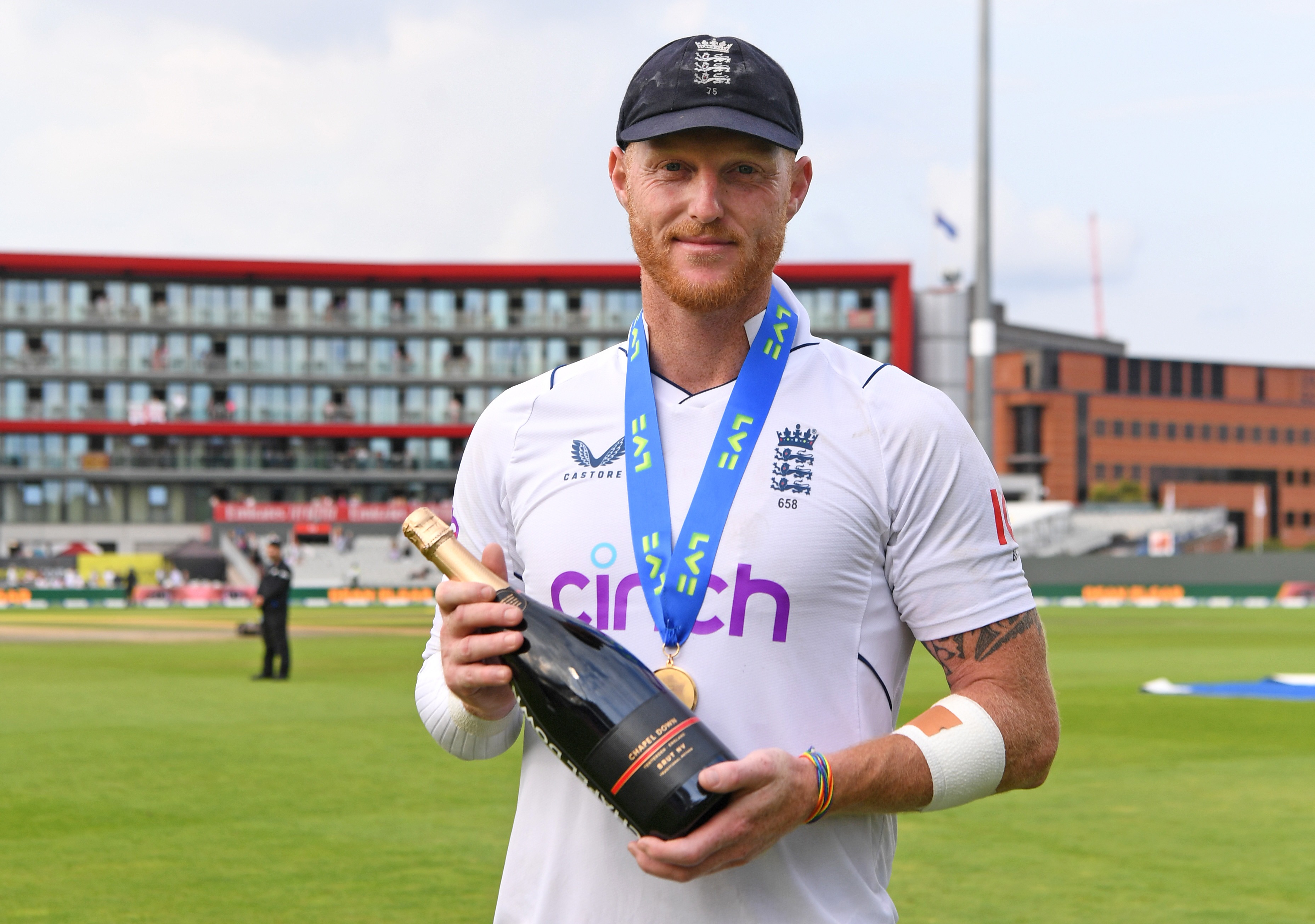 He removed Rassie van der Dussen and Keegan Petersen after their fourth-wicket stand of 87 in 43 overs was beginning to frustrate England.

Following his double strike, there was not the slightest doubt England would win the Second Test convincingly.

The only question was – would they do it on Saturday or have to wait until Sunday?

In the event, South Africa’s lower-order was wrecked by the second new ball as England captured the final five wickets in 30 balls.

England were hammered by an innings and 12 runs at Lord’s but they have reversed fortunes so dramatically that the Proteas were swept aside at Old Trafford even more emphatically by innings and 85 runs.

So, after a blip, the Bazball revolution of Stokes and coach Brendon McCullum appears back in full swing.

From the moment captain Dean Elgar chose to bat first on Thursday in tricky conditions, England were in complete control.

Stokes’ life is so fast-moving that the documentary film about his life – released on Friday – could already do with an epilogue.

At least time, Stokes appeared in less pain from his left knee than he did during another full-on spell at Lord’s.

He said: “This was an amazing team performance, no-one has taken a backward step.

“The way we bounced back from the disappointment of Lord’s was very pleasing. Cricket is about how you bat, bowl and field and the way we did that here was almost the benchmark for the standards we set.

“Throughout my career, I’ve tried to hit the wicket hard and make things happen with the ball. I didn’t want to turn to Jimmy or Ollie with the new ball round the corner. I felt in good rhythm, that’s why I continued to bowl.

“The style I play means I’m hopefully going to influence the game in a positive way. I know that when I bat or bowl well, it will go a long way towards the team winning. I like to create my own theatre.”

Van der Dussen and Petersen batted throughout the afternoon session with plenty of skill and determination.

Van der Dussen’s effort was particularly brave because he has a fractured left index finger and, such was the pain, he regularly removed his hand from his bat handle as he made contact with the ball.

South Africa’s No.5 had was actually caught behind for 41 off Stokes before tea but nobody appealed. Replays showed a faint edge.

But, in the first over after the interval, he edged Stokes again and this time there was no doubt.

In his next over, Stokes got a ball to bounce alarmingly to the diminutive Petersen and Foakes snaffled the edge.

The breach had been made and England went crashing through.

Stokes finally excused himself from the attack after a spell of 14-3-30-2, with six of the overs before tea and eight after.

The second new ball was due and James Anderson and Ollie Robinson did the rest.

Anderson finished with three wickets and became the first quick bowler in history to take 950 wickets in international cricket (664 of them have come in Test matches).

Robinson again looked the part as an England bowler and collected 4-43 with his repertoire of bounce, accuracy, probing lengths and movement.

At the start of the day, Elgar, the batsman best-equipped to bat all day, was nailed by some Anderson brilliance – bowled by a ball slanted in after the previous two left him.

Sarel Erwee was caught behind attempting to leave the ball and Aiden Markram aimed an ambitious drive at Stuart Broad and edged into the slips.

Nobody was more relieved than Broad, who had bowled Markram in his previous over, only for the wicket to be ruled out because Broad narrowly overstepped for a no-ball.

Once Van der Dussen and Petersen were dispatched by Stokes, the Proteas crumbled.

Stokes added: “Jimmy is amazing – he’s 40 but doesn’t act like he’s 40. What a great ambassador for the game and for fast bowlers.

“Ollie is a phenomenally skilful bowler and this game showed he can back it up in his third and fourth spells.” 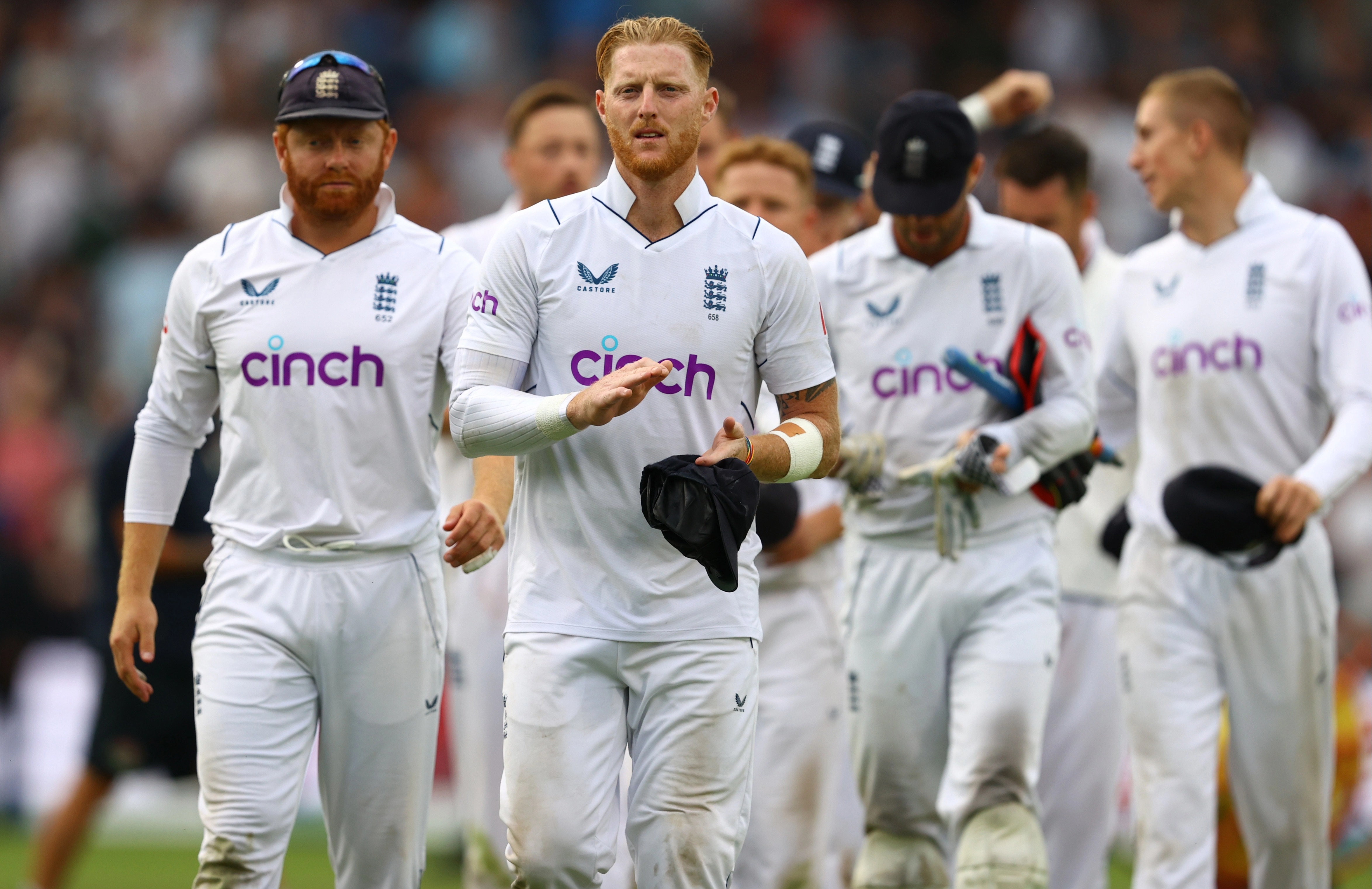 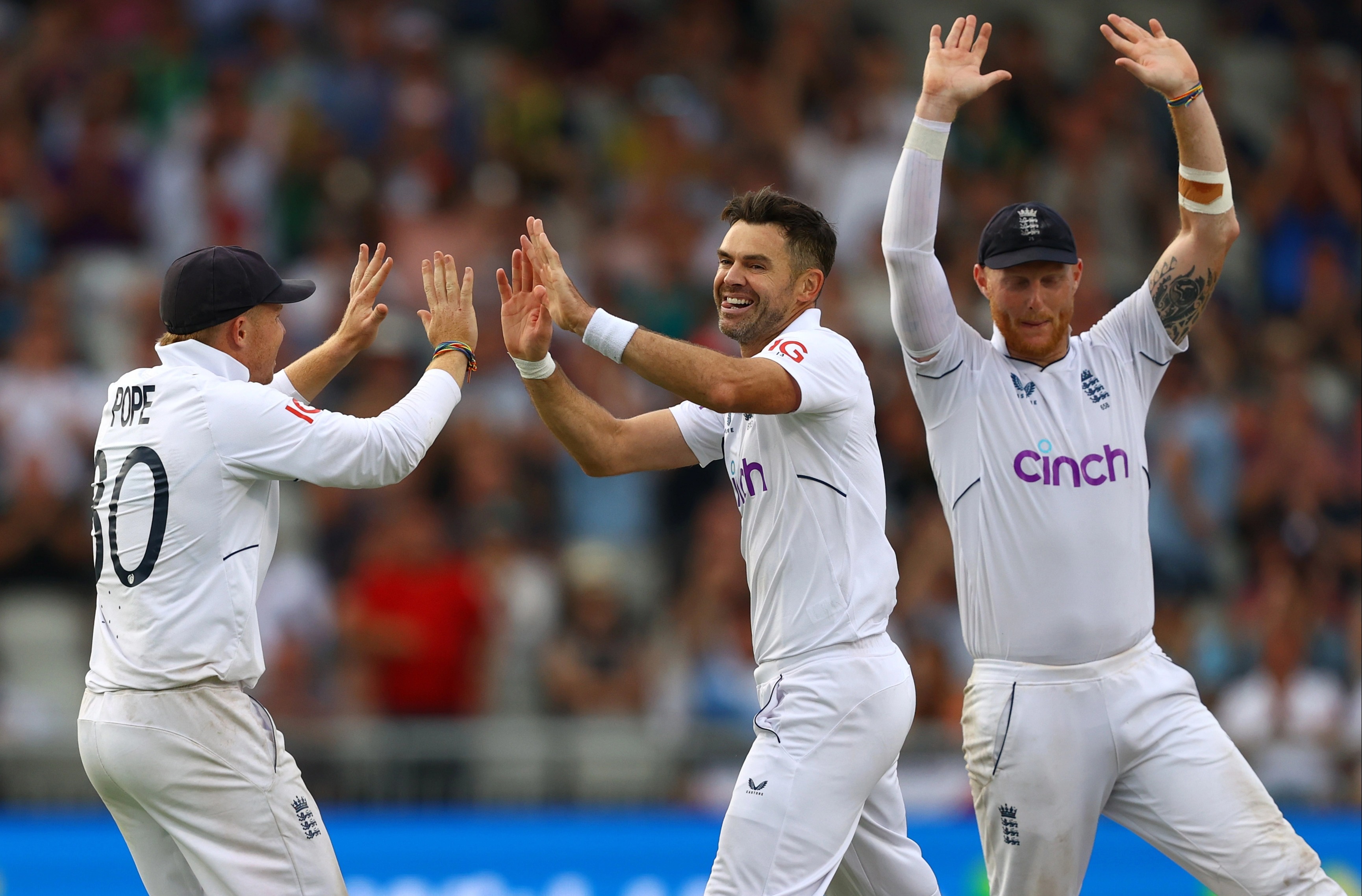 The brilliant Jimmy Anderson took three wickets in each innings 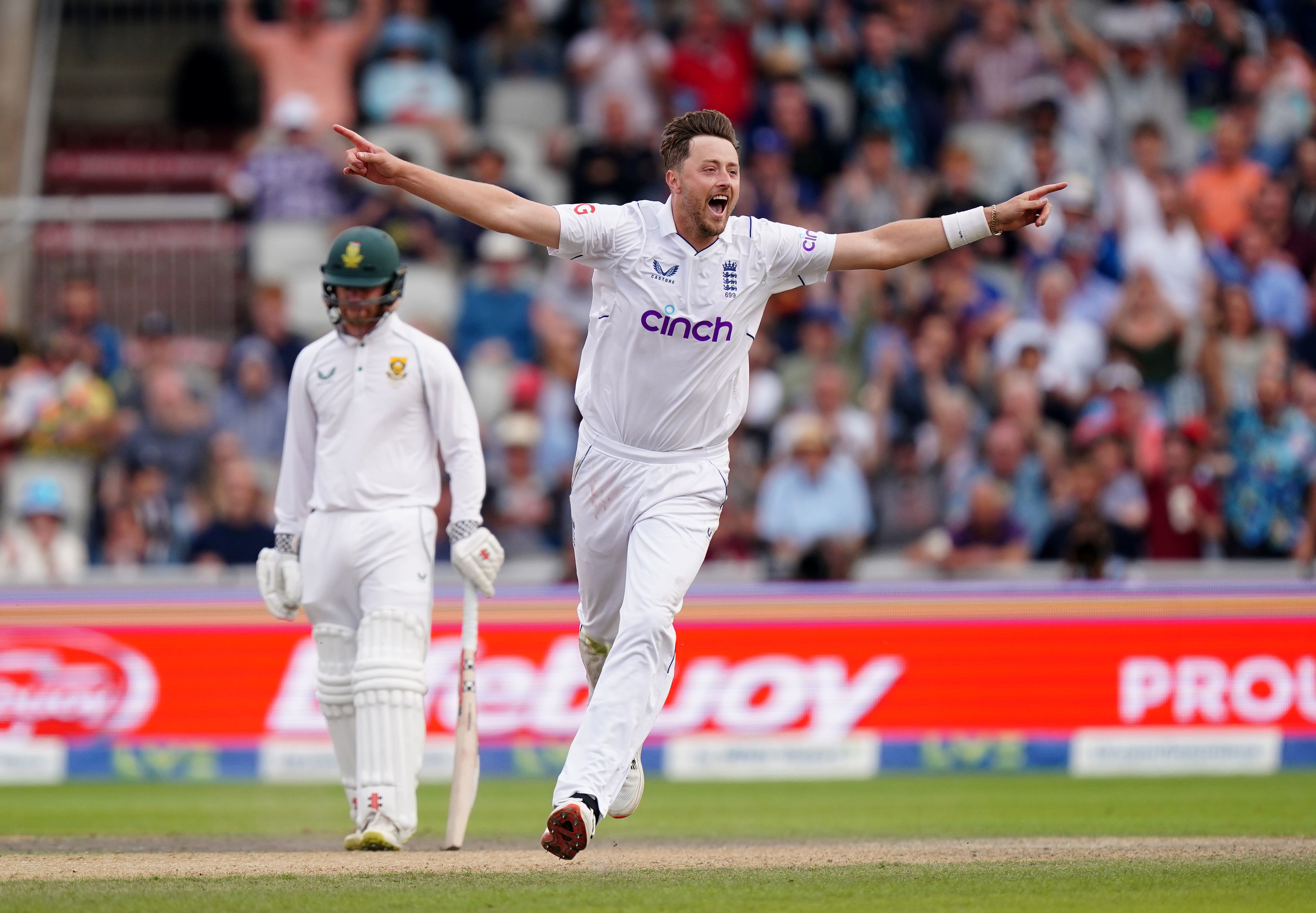