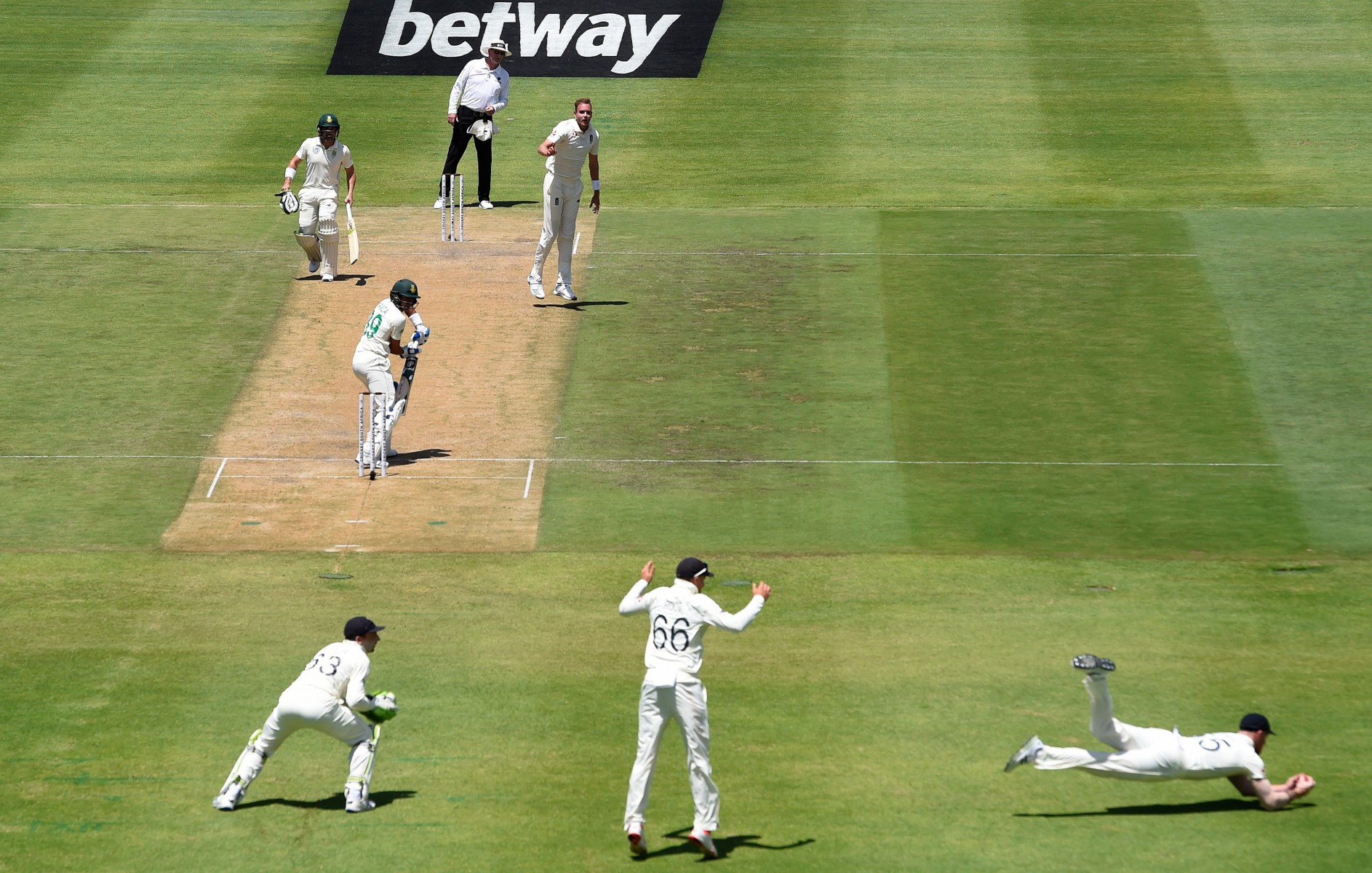 THIS fella Ben Stokes can do almost anything. Bat, bowl and catch absolute screamers in the slips.

His four grabs at second slip – three of them truly brilliant – were the significant contribution on day two of the Second Test.

Stokes stunning reflexes and bucket hands kept England in the match and, by the close of play, they were marginally ahead in what has the makings of a thriller.

The Sports Personality of the Year almost held a fifth catch but the ball escaped his grasp when his elbow landed on the turf.

The Stokes show, allied to some excellent bowling by England, meant South Africa reached 215-8 – a considerably less advantageous position than when they were 157-3.

The old uns were outstanding, rolling back the years and showing they still have plenty of petrol in their tanks.

Dont forget, one of them – probably Anderson – would probably have been omitted here if Jofra Archer was fit.

In order, Stokes catches were a dive to his right and a two-handed scoop a couple of inches from the ground to remove Hamza.

Next came a relatively routine grab that accounted for Proteas captain du Plessis.

Stokes one error came when van der Russen, on 43, edged Anderson low and the all-rounder snared the ball superbly with his right hand but it bounced from his mitt as his elbow banged the turf on landing.

Stokes was furious because, no matter how difficult the chance, he always expects to cling onto the ball.

Van der Dussen was eventually held by a diving Stokes for 68, another outstanding grab.

There was one more to come when Pretorius edged Andersons fourth delivery with the second new ball and Stokes, hurling himself to his right, did the rest.

England bowled really well, restricting South Africas run-rate to two-and-a-half an over, and doing their best to make amends for the batsmens carelessness on day one.

And there was more good news when medics cleared Archer of any serious damage to his right elbow.

Two scans have revealed nothing more than inflammation, perhaps exacerbated by his heavy workload on the tour of New Zealand.

Archer is expected to be fit for the Third Test in Port Elizabeth on January 16.

Durham speedster Mark Wood might also be available for the next Test after stepping up his workload in recent days. Wood has not played since the World Cup final on July 14.

At the start of the day, Ollie Pope and Anderson added just seven to their last-wicket partnership before Anderson guided a catch to slip.

But England were soon among the wickets.

South African debutant Pieter Malan, who spends hours in the gym judging by his bulging muscles, attempted a back-foot force against Stuart Broad and edged to Joe Root at slip for five.

Hamza and Du Plessis were both gobbled by Stokes and the Proteas were 40-3.

Broad looked to be having one of those days – you know, when his knees are pumping and he seems almost unstoppable.

He had taken two of the three early wickets and another was apparently in the bag as Van der Dussen was caught behind off a snorter for 16.

But a replay was necessary because umpire Paul Reiffel had a feeling Broad had bowled a no-ball.

The replay confirmed that Broad overstepped and van der Dussen was reprieved. He went on to extend his innings from 16 to 68, chiselled from 187 deliveries.

This was van der Russens second half-century in his second Test and he is proving a reliable, solid selection for South Africa at the age of 30.

Van der Dussen and Dean Elgar put on 117 for the fourth wicket in 49 overs. It was attritional stuff at times

England bowled really well between lunch and tea, offering little to hit and posing plenty of questions. But it was still a wicketless session.

Elgar, dismissed by Anderson from the first ball of the series in Centurion on Boxing Day, is the sort of obdurate opener that England have been seeking for years.

But, after more than four hours, he aimed an uncharacteristic lofted drive at Dom Bess and holed out to Root back-pedalling at mid-off.

It was reward for a long, economical, spell by Bess, who got through 27 overs.

The dangerous Quinton de Kock, Man of the Match in the First Test, played a couple of sweets shots before attempting something extravagant against Sam Curran and giving Anderson a simple catch at mid-off.