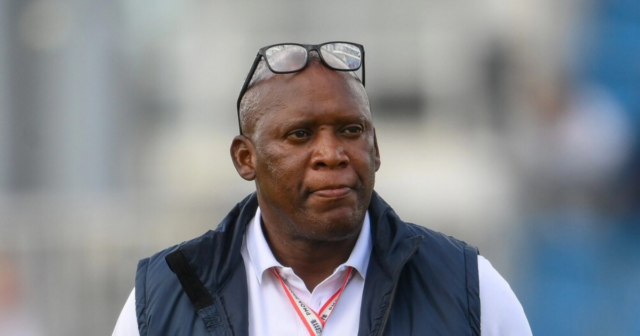 THE ECB has suspended a senior official over claims of a racial slur against England icon Devon Malcolm.

The Telegraph and the Times say the person allegedly commented this summer he was unable to see ex-bowler Malcolm ‘until he smiles’.

Comments made to ex-Test hero Devon Malcolm are being investigated

English cricket has already been rocked by the Azeem Rafiq racism scandal, leading to the ECB bringing charges against Yorkshire and seven individuals in June for bringing the game into disrepute.

The un-named official caught up in the latest allegations is said to have worked for the English Cricket Board for several years.

After emigrating from Jamaica to Sheffield in 1979, Malcolm became a popular figure in the sport.

He picked up 128 wickets in 40 Tests, famously taking 9-57 with his extreme pace against South Africa at The Oval in 1994, as well as starring for Derbyshire, Northamptonshire and Leicestershire.

Now 59, he joined another former England quickie, Dean Headley, as one of five newcomers on the ECB’s match referees panel in a bid to increase diversity.

But it came after he was previously twice turned down in his attempt to become a first-class umpire, even though others were readily accepted.

And two years ago, former umpires John Holder and Ismail Dawood claimed there was discrimination in the ECB’s appointments system.

They noted that no non-white official had made the first-class list since 1992.

Ex-Hampshire bowler Holder, English cricket’s most senior black official, was axed from officiating in Tests in 1991.

That was soon after he reported reporting alleged ball tampering by an England player.

Yorkshireman Dawood, who played for Northamptonshire, Worcestershire, Glamorgan and Yorkshire, was never promoted from the reserve list.

Soon after Malcolm joined the new ‘supplementary panel’ of match referees., Holder and Dawood dropped their employment claim against the ECB.