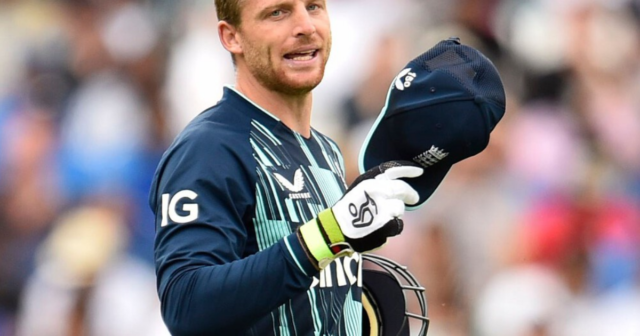 JOS BUTTLER’S tough start to his one-day captaincy career continued as England slumped to one of their heaviest defeats in history.

Buttler’s team were crushed by ten wickets after being routed for just 110 all out with four of the top six batsmen dismissed for ducks.

Then India knocked off the runs in just 18.4 overs without losing a wicket.

It was only England’s sixth ten-wicket defeat in one-day internationals and the match was all over by 4.55pm – more than four hours before the scheduled finish.

As England’s Test team is transformed under captain Stokes and new coach Brendon McCullum, the white-ball side looks out of sorts as Buttler and Matthew Mott take charge. They have already lost the Twenty20 series to India.

And now England, who haven’t lost a bi-lateral 50-over series at home since 2015, are 1-0 down in the 50-over matches with two to play at Lord’s on Thursday and Old Trafford on Sunday.

Sure, the pitch offered some bounce and movement with the new ball but this was a miserable effort.

Indian master bowler Jasprit Bumrah finished with the remarkable figures of 6-19 and, at one stage, England were threatening to go below their lowest one-day international total, which is the 86 all out they mustered against Australia in 2001.

Buttler said: “It’s a really disappointing day and a tough loss to take. There was a bit in the wicket early on and Bumrah exposed that really well.

“We must look at managing our batting better, especially not losing so many early wickets.

“But it’s not a time to panic or try to find too many faults. Batting has been our super-strength over the last five years or so.

“Being captain is a tough job on days like this and a great job when you win.

“I remain as balanced as I can. This one-day side has had a lot of success and we’re trying to maintain that.

“It doesn’t change that we are a good team and I believe we can come back strongly.”

England were put into bat on a grassy pitch and, by the end of the third over, three of their main batsmen had been dispatched for ducks.

The horribly out-of-form Jason Roy dragged on to Bumrah, Joe Root nibbled at a delivery that lifted and Ben Stokes was caught behind off Mohammed Shami via the inside edge.

England were 7-3 and any dreams of mounting a recovery soon dissolved.

Jonny Bairstow was caught behind off the brilliant Bumrah and England three returning Test stars – Root, Stokes and Bairstow – managed seven runs between them.

Liam Livingstone jumped across his crease and attempted some sort of ramp shot but he missed the ball and was bowled behind his legs by Bumrah. That was the fourth duck of England’s innings.

Moeen Ali drove the ball back at Prasidh Krishna, who held a low return catch.

Buttler hit his first two balls for four but was caught on the square leg boundary attempting to hit Shami into the crowd.

England managed to squeeze past three figures – which brought an ironic standing ovation from the crowd – but their 110 all out is their lowest of all-time against India.

David Willey was last man out, bowled moving across his stumps as Bumrah collected his sixth scalp.

Rohit Sharma hit five sixes in his 76 not out as India rampaged to their paltry target.

Did you miss our previous article…
https://www.sportingexcitement.com/cricket/watch-hilariously-bad-fake-ipl-filmed-on-a-farm-as-brazen-scammers-are-arrested-for-conning-russian-gamblers/