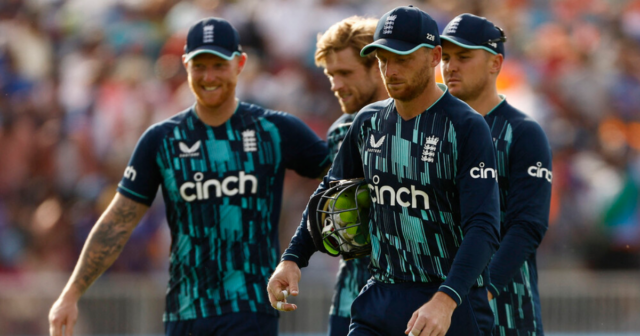 JOS BUTTLER admitted he has a lot to learn as new white-ball captain after England were thrashed by India.

Indian batsman Rishabh Pant finished the job with six fours in seven balls to condemn England to only their second home 50-over series defeat since 2015.

It means Buttler has started with losing Twenty20 and one-day international series after taking over from Eoin Morgan.

He said: “I’m learning a lot about the job. I found the first week of captaincy busy but I’m feeling more comfortable now.

“There are a lot of games in a short space of time, which is a challenge. I would have liked a day or two to reflect.

“I feel like I’m an experienced cricketer but quite a young captain with an opportunity to grow. I think it will take time. I can’t run before I can walk.

“I must learn to lean on the guys around me and my style should develop over time. We have a new coach as well in Matthew Mott. We’re trying to let that bed in as quickly as possible but it might take some time.”

His innings concluded with five fours and a single from a David Willey over and another boundary from the first ball of the next over by Joe Root. Pant looked like he could hit the ball wherever he chose.

It might have been different if Buttler had managed to stump Pant off Moeen Ali when he had scored 18 but the ball escaped his grasp with the batsman stranded.

Reece Topley, who had record England one-day figures of 6-24 at Lord’s last Thursday, captured India’s first three wickets as they chased England’s modest 259 all out.

But once Pant was joined by Hardik Pandya in a fifth-wicket stand of 133, the result rarely looked in doubt.

Let’s be honest, England have played poorly in these white-ball matches against India. Their batting has lacked smart decision-making, their bowling short of penetration.

Buttler and Mott will need a big improvement in the six matches against South Africa, which start with a 50-over game in Durham on Tuesday.

Buttler added: “We need to be better, we haven’t played our best in these matches by a long shot. We need to get back to what we do well as a team.

“Pant is a fantastic player and, if you give him a second chance, he will generally hurt you.”

England’s malaise started in the second over when Jonny Bairstow and Joe Root were both out for ducks. They failed by 25 balls even to bat out their 50 overs.

Buttler’s innings of 60 was their only half-century of the three-match series – a sure indication of their current wobbles with the willow.

Buttler used three helmets during his innings after twice being bumped on the head by Mohammed Siraj. He passed the concussion protocols but required a replacement lid each time.

England tried to be as aggressive but they were careless in their execution with seven batsmen scoring 18 or more but only Buttler getting to fifty.

Buttler, Liam Livingstone, David Willey and Craig Overton were all caught on the boundary while Jason Roy launched a steepling skier straight up in the air and down into wicketkeeper Pant’s gloves.

Did you miss our previous article…
https://www.sportingexcitement.com/cricket/t20-blast-drama-as-hampshire-eventually-crowned-champions-in-last-ball-thriller-minutes-after-erroneous-fireworks-show/