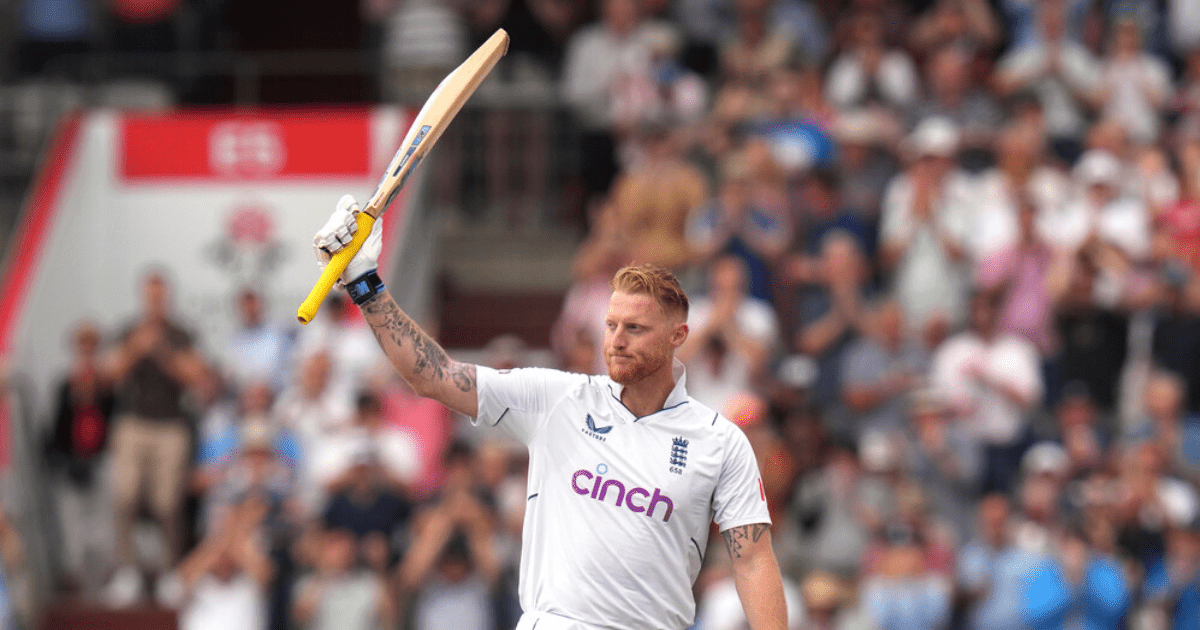 BEN STOKES scripted another new scene in his dramatic life story by scoring his first century as England captain.

On the day when a documentary about Stokes was released, the man himself played a starring role in a dominating England performance.

Ben Foakes raises his arms aloft after scoring his century

He scored 103 and a second Test century from Ben Foakes propelled England to a position where they will surely win the Second Test against South Africa and level the series.

Stokes played an innings of rare distinction. Nothing foolish, nothing too aggressive, just brilliant and near-faultless batting at a perfect tempo.

Stokes and Foakes revitalised England’s innings so effectively that they went from scores of 43-3 and 147-5 to a total of 415-9 declared.

South African openers Dean Elgar and Sarel Erwee negotiated nine overs at the end of the second day and will resume this morning with 23-0 – still 241 runs behind.

The Stokes film focuses on his mental health struggles, the death of his father Ged and his period away from cricket last year.

There have been plenty of tough times but this was a day of pure joy for Stokes as he reined in some of the extremes of ‘Bazball’ that his batting has displayed this summer. Few could have played better and with such authority.

He never forgets his late dad and looked to the heavens and did his regular “missing finger” salute as a tribute to a man who once had a digit amputated in order to prolong his rugby league career.

Foakes said: “Ben is a great guy to bat with, he takes the pressure off you and he really raced away when moving from fifty to 100.

“He’s got a few good things going on his life – everyone wanted a piece of him. And it’s a great film as well. The way he played was pretty special.”

It must be said that South Africa skipper Elgar had a tactical shocker to follow his erroneous decision on day one to bat first in overcast conditions. In particular, Elgar strangely under bowled speedster Anrich Njorte at the key moments.

Stokes struck three sixes, the biggest of which was a mighty blow off spinner Simon Harmer over long-on that took him to his half-century.

His hundred arrived with a drive back to Kasigo Rabada, who ended up inadvertently kicking the ball to square leg and allowing Stokes to run a single.

Soon after, Stokes attempted a big hit and skied a catch to mid-off.

Foakes’ batting was almost as neat and polished as his wicketkeeping, which is saying something.

He has endured setbacks – such as a torn hamstring last summer when he slipped in the Surrey dressing room and a debilitating dose of Covid this summer.

And he has been under pressure for a lack of runs at No.7 but his second Test century – his first was on debut in Sri Lanka nearly four years ago – will silence those comments.

Foakes hardly ever missed with his favourite shots through mid-wicket and was certainly happy when Elgar seemed so reluctant to utilise Nortje’s 94mph thunderbolts after lunch.

Foakes now has as many Test hundreds in 30 innings as Jos Buttler has made in 100 innings.

Batting was tricky at the start and Nortje dismissed both Jonny Bairstow and Zak Crawley before England, resuming on 111-3, were level with South Africa’s first innings total of 151 all out.

But those blokes, Stokes and Foakes, put England miles ahead in the match with a sixth-wicket stand of 173.

Stokes was given out lbw to Lungi Ngidi on 72 but replays showed an inside edge. And he was dropped on 92 by Aiden Markram leaping to his right at cover, a difficult chance.

Foakes was given out lbw to Keshav Maharaj on 28 but replays showed the ball pitched outside legside and was also missing off.

Otherwise, they were in almost complete control.

In fact, Stokes was caused most discomfort when his left knee suddenly locked up early in his innings and he needed treatment, not for the first time this summer.

After Stokes departed, Stuart Broad got off the mark with a straight six, Ollie Robinson whacked a couple of boundaries and Jack Leach swatted a switch hit for four. The lower-order was having some fun.

No.11 James Anderson did not even both to pad up and Stokes’ declaration left his bowlers a blast at South Africa’s openers. But they could not make a breakthrough.

Did you miss our previous article…
https://www.sportingexcitement.com/cricket/ex-england-star-gary-ballance-apologises-to-azeem-rafiq-for-using-unacceptable-and-racist-language-while-at-yorkshire/