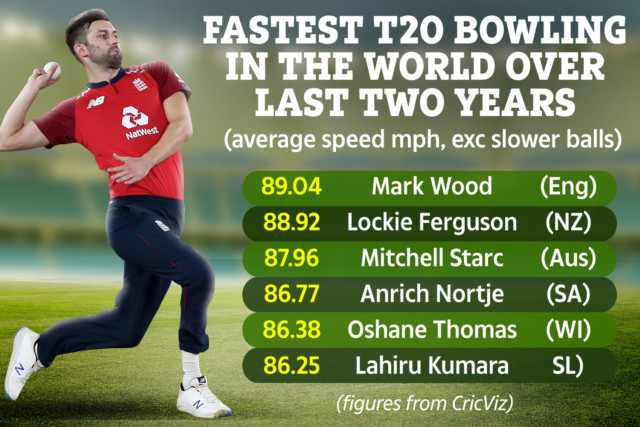 MARK WOOD is officially the fastest Twenty20 bowler in the world – and he is getting faster.

The Durham pace ace unleashed the quickest ball of his career on Tuesday when he sent the speedgun spiralling to an incredible 96.3mph.

And data experts CricViz calculate his average speed over the past two years in all T20 internationals is 89mph – ahead of Kiwi Lockie Ferguson and Aussie Mitchell Starc.

Jofra Archer’s average over the same period is a more than respectable 86mph.

That’s why the Wood and Archer combination is proving so potent in the current series against India and is a big part of England’s plans for the World Cup in October.

No batsman enjoys facing searing pace with a new ball and wickets in the power play are key to winning T20 matches.

For a man with a long history of injury – he missed the second T20 match on Sunday with a heel problem – short, explosive spells suit him.

Wood said: “I’m hoping speed is a big factor in the World Cup, it will give me a better chance. I don’t think India is somewhere you’d naturally say is a fast bowler’s paradise but things are going well at the moment.

“We know fast bowling can be smashed so it’s important not to get too high or too low. We have so many good quick bowlers that I don’t feel my place is a given.”

Wood and Archer are often compared in terms of speed but there is no contest, really – Wood is the quicker bowler. 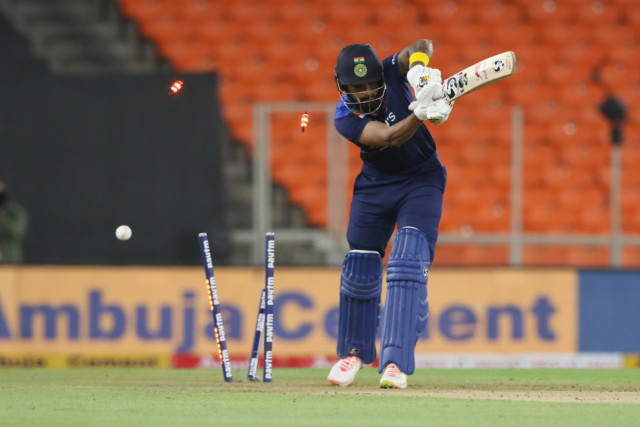 But he does not want just to be a one-trick pony. He constantly works on his variations.

Wood explained: “Being asked about comparisons with Jofra doesn’t bother me but it’s the same question all the time…’Do you and Jof try to bowl faster than each other?’

“Jofra starts with the new ball a lot of the time and, because he keeps the pressure on, other bowlers are allowed to take risks. It’s a matter of bowling in tandem, trying to back each other up and keeping the pressure on.

“We enjoy playing together and it brings out the best in me. And I’m sure it does with him too. It’s exciting when we bowl together.

“I’ve never notched 100mph. Actually, that’s a lie – I notched 123mph on a gun at Durham once. The gun was clearly broken! I don’t know if that counts or not!

“The quickest I’ve been recorded in a match was on Tuesday with a bouncer to Rohit Sharma that was 155kmh (96.3mph).

“I watch all bowlers. I played with Shardul Thakur at Chennai and he has a new slower ball. I’m looking at it and how well it’s working – it’s something I could try to adapt to my game.

“My role is pretty clear – to bowl quick – but behind the scenes I’m still trying to learn new things, slower balls, getting better at my yorkers. There are always things to improve.”

England lead the series 2-1 after their eight-wicket triumph in Ahmedabad on Tuesday. The fourth match is at the same venue today.