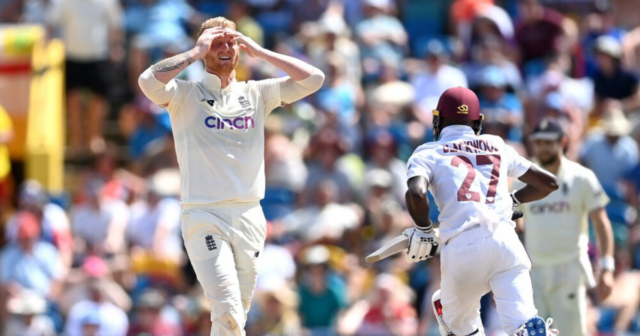 IT’S no good getting the runs if you can’t get the wickets.

As the sun beat down on England and the Barmy Army in Barbados, the decision to leave Jimmy Anderson and Stuart Broad at home looked even more foolish.

A day that began with England licking their lips over the damage Jack Leach would do on a turning pitch turned into a nightmare.

Leach bowled too quickly, not giving the ball time to grip, as West Indies closed in on the follow-on target of 308 with just four wickets down at the close.

The seamers bowled straight, with reverse swing, but rarely with anything approaching the menace required.

Those failings were compounded by failing to review when leg stump would have been knocked out of the ground, and taking wickets with no balls. 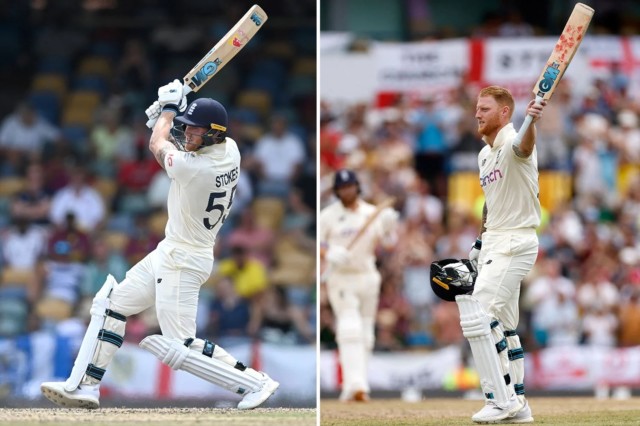 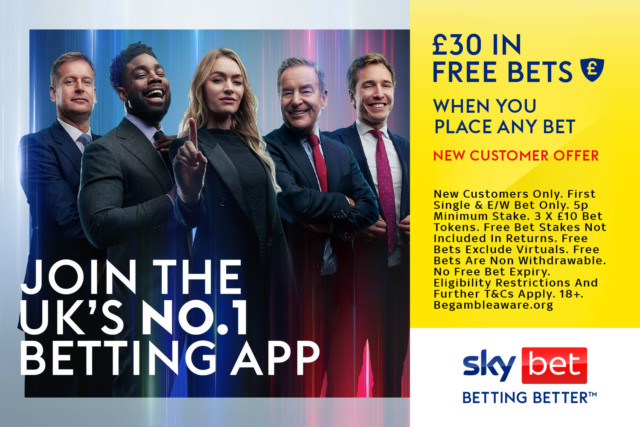 The prospect of only a fourth win in 17 trips to the Kensington Oval receded even more swiftly than the shadows lengthened.

Ben Stokes, showing he is mortal, was responsible for the first error.

In the over after – via a controversial third umpire decision – he had dismissed Nkrumah Bonner, the Durham all-rounder crashed one into Jermaine Blackwood’s back pad, with the new bat still not off the mark.

Stokes, though, told Joe Root the ball was missing leg, advising against a review.

Ball tracking, though, suggested it was smashing into the pole three-quarters of the way up.

What would have been 101-4, after Leach had earlier snagged Shamarh Brooks when he spooned a wide one straight to Chris Woakes at point, was transformed over the next five painful hours into a partnership heading towards 200.

Credit must go to Blackwood, disciplined and determined, as well as stoic Windies skipper Kraigg Brathwaite, who completed his tenth Test ton, and third against England, off 278 balls including 11 boundaries.

England, though, were complicit, none more so than rookie seamer Saqib Mahmood.

The Lancashire bowler, neat and tidy throughout, thought he had claimed his first Test scalp when he speared one through Blackwood’s defences with the No5 on 65 and the score on 230.

But the third umpire saw that he had overstepped, by a long way.

Dejection for Mahmood, another life for Blackwood, England’s chances of forcing the game ebbing further away.

There was no lack of effort by England, that is true.

Yet if ever there was a surface that Leach would have wanted to bowl on – at least, so it seemed as he turned two of his first four deliveries of the day past the outside edge – it should have been this one.

Leach was monstered Down Under by Marnus Labuschagne and David Warner but in Bridgetown he continued to push it through, even when the home side were in survival mode.

The fact that his only wicket came from a horrible miscue, as Brooks made a mess of a wide one begging to be hit, said far too much.

As did the lack of chances created by the rest of the attack, which was game but lacked the guile that one of Anderson or Broad would surely have offered.

Indeed, there was genuine fortune about another wicket taken, with the third umpire confirming Stokes’ leg before shout against Bonner – trimming the bails – despite a spike on ultra-edge as it passed the bat and into the pad.

After that, misery until late in the day – including a missed stumping of Brathwaite from the usually-reliable Ben Foakes – before Dan Lawrence was the unlikely hero for the tourists.

The part-time spinner had Blackwood pinned in front for 102 with just minutes to go in the day.

But Brathwaite and nightwatchman Alzarri Joseph clung on until stumps as the West Indies closed on 288-4 – still 219 runs behind England.

Meanwhile, fast bowler Mark Wood has been ruled out of the remainder of the tour and his IPL contract with his ongoing elbow injury.

Advertisement. Scroll to continue reading.
In this article:jimmyanderson, nogood, stuartbroad