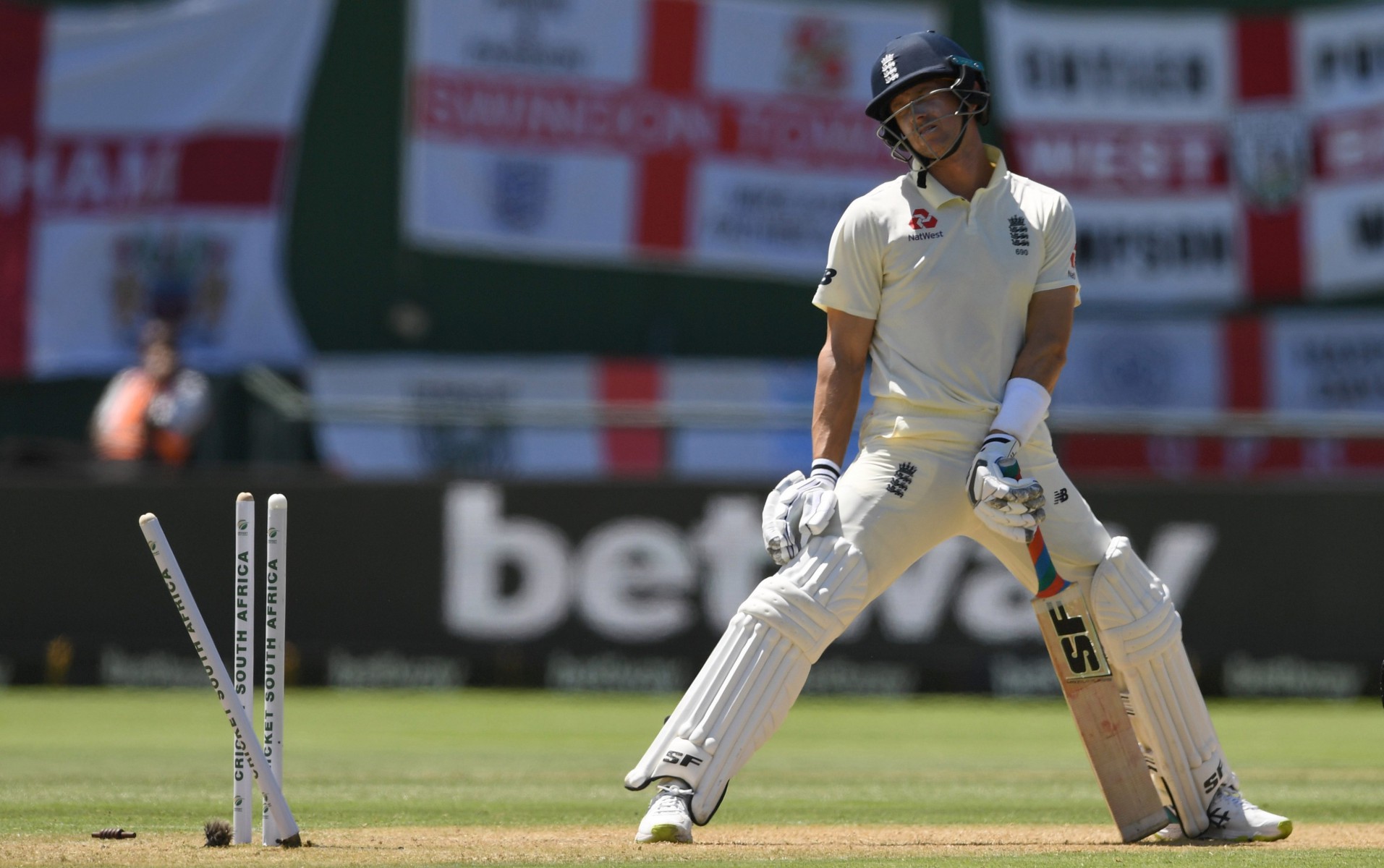 CRICKET or football, the outcome for England right now is pain, misery and a whole heap of frustration.

On the opening day of the Second Test, six batsmen scored between 29 and 56 in another display of appalling negligence.

Just 24 hours after Surrey opener Rory Burns tour was ended by damaged left ankle ligaments sustained in the daily kickabout, most of Englands senior batsmen deserve a kicking of their own.

They broke the cardinal rule of batting in five-day cricket – when you get a start, you have to make it count.

Joe Root and Co know teams rarely win Test matches when only one person reaches a half-century on a decent pitch. But they still seemed powerless to halt their grim procession back to the dressing-room.

Zak Crawley, brought in to open as Burns replacement, departed early but the rest contrived ways of getting out when well set. It was gross carelessness on a sunny day at a beautiful ground.

By the close, England had reached 262-9 and that was helped by an unbroken last-wicket stand of 28 between Ollie Pope and Jimmy Anderson.

There might not have been a tackle, free-kick or shot at goal in sight and the only header was when Joe Denly was sconed on the helmet by Anrich Nortje and the ball flew 30 yards in the air towards fine leg.

But this was still a day of missed opportunities and sporting slackness. Depressingly, we have seen it dozens of times before.

As for football, well, the cricketers wont be playing that for the foreseeable future following the series-ending injury to Burns.

Captain Root and head coach Chris Silverwood made the decision within minutes of Burns being piggy-backed to the dressing-room on Thursday.

England supremo Ashley Giles, who is back in the UK and said to be furious at the latest injury playing football, would have banned it even if Root and Silverwood wanted to continue.

With Burns, Jofra Archer and Jonny Bairstow either injured or dropped, England fielded a collection of inexperienced and baby-faced youngsters.

In fact, this was the first time England have had four players under the age of 23 and the quartet – Zak Crawley, Pope, Sam Curran and Dom Bess – wouldnt look out of place in the under-16s.

This was their chance, a glimpse into Englands future. But only Pope made much of a contribution and he finished top scorer with 56 not out.

Root won the toss but Crawleys forensic examination by Vernon Philander ended quickly with an edge to the keeper.

Incredibly, Crawley and Dom Sibley formed Englands first pair of right-handed openers since Michael Vaughan and Rob Key in 2002. All those years of Marcus Trescothick, Andrew Strauss and Alastair Cook, you see.

Sibley passed his previous highest Test score of 29 but, on the stroke of lunch, edged one from Kagiso Rabada that lifted a touch.

Root looked in sublime form, working the ball around and punching behind square on the offside with his trademark shot.

On 35, he aimed a drive at Nortje, edged to slip and watched in relief as Rassie van der Dussen spilled the chance above his head. Root could not take advantage. Two deliveries later, he was caught behind via the glove.

Denly was prepared to take his time and spent 48 balls marooned on 21 but was another not to make a significant contribution. He was bowled through the gate by left-arm spinner Keshav Maharaj.

Stokes looked in imposing touch – remember, he plundered an astonishing 258 in the Test match here four years ago – but, like the rest, could not truly make it count.

He hoisted Maharaj for a monstrous six over long-on and unfurled several more commanding boundaries. But then somehow managed to lose control of his bat as he aimed a drive at Nortje and squirted the ball to extra cover.

Jos Buttler promised before the match to be more aggressive at No.7 and try to play his natural game, the one that is so successful in white ball cricket.

He was as good as his word, too, forcing boundaries through the covers and launching one huge and apparently effortless six off Maharaj that landed in the building site at wide long-on.

But, sure enough, Buttler edged a catch behind just when he was looking good.

Curran left the ball stylishly. Trouble is, it crashed into his off stump.

Bess had to come out and face the second new ball. Philander found his edge straightaway and the second instalment of Bess international career began with a golden duck.

Stuart Broads bat became tangled his pads as he attempted to keep out a Rabada yorker and was bowled.

Pope, who bats so much like Ian Bell, uppercut a couple of boundaries and his stand with Anderson provided valuable runs. Pope was caught at fine leg off Rabada for 56 but it was a no-ball.

Pope did okay, it was the rest who must contemplate their string of missed opportunities.