JONNY BAIRSTOW was “stitched up like a kipper” on live TV on Sunday after being caught with a pair of binoculars appearing to ogle female fans during England’s clash with South Africa.

The batsman, 30, was spotted keeping an eye on the action as Dom Sibley and Joe Root put the visitors in control against South Africa.

Whoever is in charge of the camera shots for the #SAvENG cricket has played a blinder and mugged Jonny Bairstow off here! Fair play! @SkyCricket pic.twitter.com/qdQkuA2WmP

But thanks to some witty production from the TV crew, fans reckon Bairstow has been caught checking out the wrong kind of talent.

Bairstow isn’t playing in the Second Test at Newlands, Cape Town after amidst a poor run of form – replaced by Surrey youngster Ollie Pope.

But the flame-haired Yorkshireman looked in high spirits, kitted out in training gear on the England balcony.

Clutching a pair of binoculars, Bairstow – once rumoured to be dating Poldark star Eleanor Tomlinson – was seen looking intently around the ground on day three.

But in between shots of the grinning batsman, the production team cut in shots of some female fans soaking up the summer sunshine.

All the while, England legend Kevin Pietersen on commentary can be heard struggling to keep it together in the background as he erupts into a fit of laughter.

Viewers were quick to catch on to the TV producer’s game, with one tweeting: “Whoever is in charge of the camera shots for the #SAvENG cricket has played a blinder and mugged Jonny Bairstow off here! Fair play!”

Another wrote: “@jbairstow21 and the benefits of not playing. Quality!” 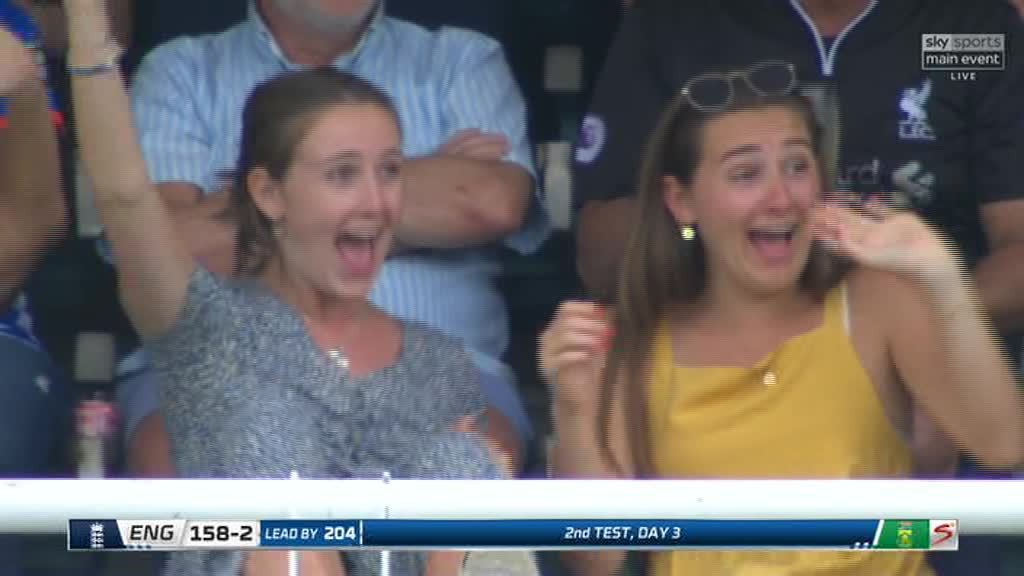 TV crews made it look as though Bairstow was keeping an eye on the wrong kind of talent.

@jbairstow21 and the benefits of not playing. Quality! Well and truly done by @SkyCricket pic.twitter.com/P23AhJKs29

Bairstow being stitched up like a kipper there by the cameraman

A third added: “Bairstow being stitched up like a kipper there by the cameraman @jbairstow21”.

James Anderson – who took his 28th five-wicket haul earlier in the day – tweeted about the clip, replying with three cry-laughing emojis.

Bairstow’s former England team-mate Steven Finn even got in on the act, tweeting: “Done him dirty”.

Another of the England star’s ex-colleagues, Ben Duckett, wrote, “This is phenomenal”, along with no fewer than 12 cry-laughing emojis.