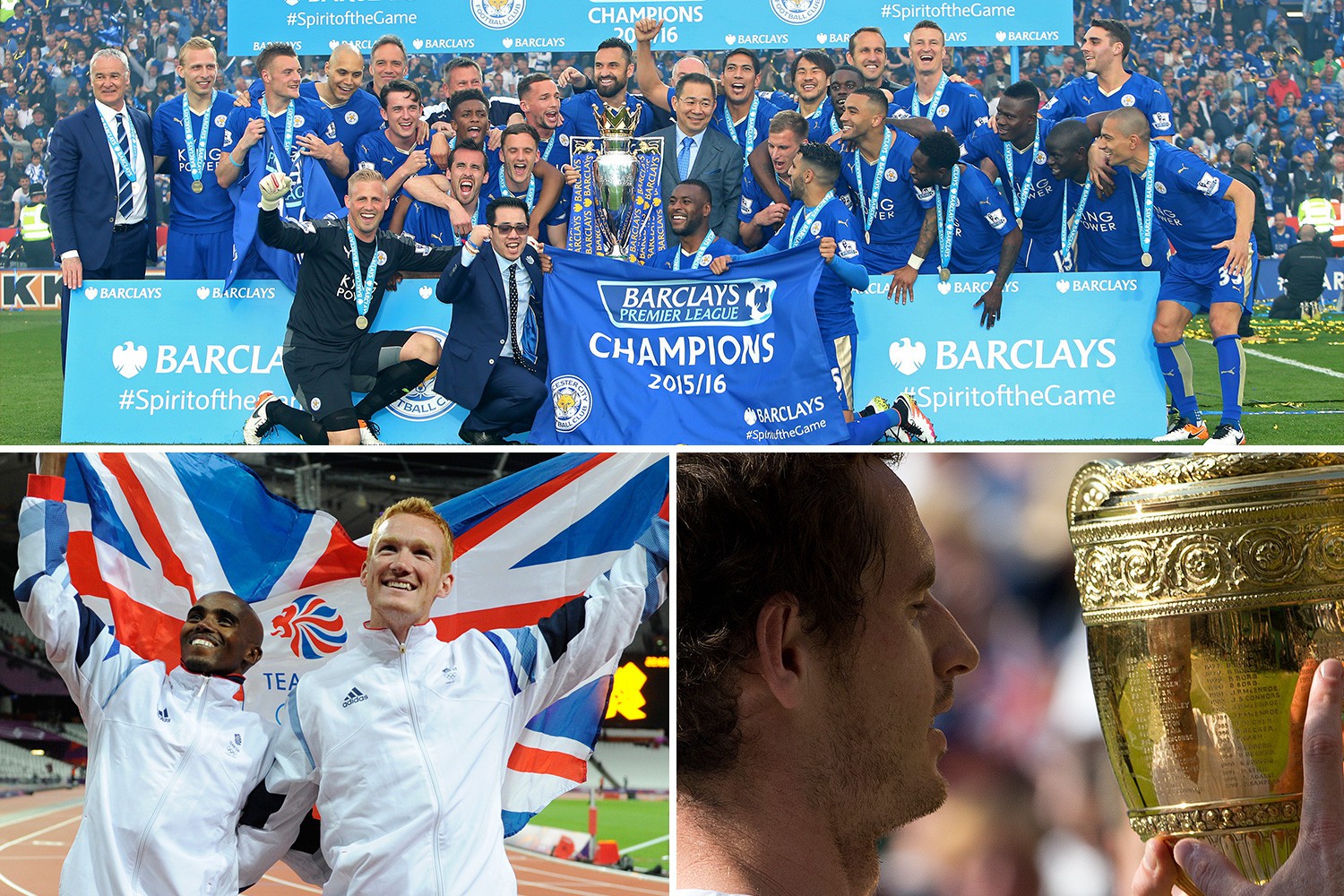 THE last ten years have represented a true golden age for British sport.

SURELY the single most unlikely story in the history of British sport came in 2016 as Claudio Ranieris pre-season relegation favourites overcame odds of 5,000-1 to claim the Premier League title.

The Foxes, a collection of big-club rejects and cut-price gems, stormed home by ten clear points when no outfit outside of the Big Six had even reached the top four in the previous ten seasons.

Former non-league striker Jamie Vardy was Footballer of the Year and bargain-bucket winger Riyad Mahrez the PFA Player of the Year, while NGolo Kante was the heart and lungs of this counter- attacking crack unit.

Leicesters triumph was confirmed during a party at Vardys house while nearest rivals Tottenham fought out a 2-2 draw at Chelsea.

It was celebrated at the King Power Stadium with a serenade from tenor Andrea Bocelli as Ranieris men lifted the trophy.

BRITAIN had experienced 76 years of hurt waiting for a Wimbledon mens singles champion until Andy Murray conquered the All England Club with his 2013 victory over world No1 Novak Djokovic.

The only surprise was that the Scot achieved his crowning glory with remarkably little tension, defeating the Serb in straight sets although he was made to wait until his fourth match point.

Murray had secured Olympic gold on Wimbledons Centre Court the previous year, then gone on to claim his first Grand Slam title at the US Open.

He would win Wimbledon again in 2016 and, alongside six-time Formula One champion Lewis Hamilton, he must be regarded as one of Britains two greatest sportsmen of the decade.

THE centrepiece of a golden Olympic summer in 2012 was Team GB winning three track-and-field golds in the space of 45 minutes.

Jess Ennis completed her heptathlon triumph, while Mo Farah roared to an expected victory in the 10,000m, with the shock long-jump success of Greg Rutherford making it six British golds in all that day.

There would be 29 British golds in total and a warm glow across the nation although by the decades end, the London Olympics were tainted as the dirtiest Games of all time with 132 drugs cheats having been disqualified.

Farahs own achievements were put under scrutiny when his coach, Alberto Salazar, was banned this year for doping offences.

ENGLISHMEN dont win many World Cups in any sport and they never do so without extra-time and serious strain on the cardiovascular muscles. Yet this year was off the scale, featuring not just one but two ties.

As England struggled to chase down a modest New Zealand total, Ben Stokes made a heroic unbeaten 84, with three extraordinary sixes two of them lucky, one of them including four overthrows off his outstretched bat as he dived to make a second run.

After the match finished level, so did the tie-breaking Super Over thanks to Jason Roys throw and Jos Buttler whipping off the bails to deny the Black Caps a winning run.

England prevailed on a countback of boundaries, a rule so ridiculous it has since been scrapped.

THE most dramatic moment in Premier League history came in 2012 as Manchester City clinched their first title in 44 years on goal difference thanks to two injury-time goals in a 3-2 victory over QPR.

It looked as though decades of misery at the hands of cross-town rivals Manchester United were going to continue as Alex Fergusons men won at Sunderland while ten-men Rangers came from behind to lead at the Etihad.

Yet Edin Dzeko equalised for City in the second of five added minutes before Agueros climactic goal set off Martin Tyler into his ecstatic shriek of the Argentinians name.

It was the most memorable moment of football commentary since Kenneth Wolstenholmes They think its all over in 1966.

THE only away win in the Ryder Cup this decade came in 2012 and the most astonishing comeback in the history of the great biennial transatlantic golfing event.

German Martin Kaymer holed a five-foot putt on the 18th green to defeat Steve Stricker and retain the trophy before Francesco Molinari halved with Tiger Woods to secure outright victory for the visitors.

A post-war record crowd of 90,000 at Wembley saw a contest of fluctuating fortunes.

Watford man AJ knocked down the Ukrainian in the fifth round, only to be floored himself in the sixth. But at the start of the 11th, Joshua landed a sensational uppercut and Klitschko was twice on the canvas before the referee stopped the fight.

Joshua would go on to pack out Cardiffs Principality Stadium twice and Wembley again, then lost and regained his crown against Andy Ruiz Jr.

THIS was the highlight of Gareth Southgates 2018 Russian summer of love as England finally won a World Cup penalty shootout at the fourth attempt thanks to Jordan Pickfords out-stretched arm denying Carlos Bacca.

Eric Dier slotted home the winning spot-kick after England had been denied victory in normal time by a last-minute Yerry Mina header in a Spartak Stadium dominated by raucous Colombian fans.

The last-16 clash was Englands first knockout win for 12 years and they went on to defeat Sweden before an extra-time semi-final defeat by Croatia.

England lost to the only two top-quality teams they faced in Russia. But the overall feelgood factor of the campaign made national heroes of manager Southgate and his men.

TEAM GB achieved their biggest Olympic medal haul in 108 years at Rio 2016, claiming 67 gongs and finishing second in the table.

Most memorable of their 27 golds came in the womens hockey with a penalty shootout win over the Netherlands.

Goalkeeper Maddie Hinch shut out the world champion Dutch with a string of saves the most audacious masked robbery since Dick Turpins heyday.

The British women, skippered by Kate Richardson-Walsh and including her wife Helen, had been outplayed but equalised twice to force the shootout with a 3-3 draw.

And the drama gripped the nation with the 10 OClock News shoved back to make way for the tense conclusion.

BRITAIN waited 103 years for a Tour de France triumph then six came along in a jiffy.

For better and worse, British cycling has provided one of the most compelling stories of the past decade.

Charismatic Bradley Wiggins wore the Yellow Jersey up the Champs-Elysee in 2012.

Yet the team has since been under a dark cloud, with allegations of drug misuse centring on the Jiffygate scandal.

And last year, the parliamentary Committee for Digital, Culture, Media and Sport found Team Sky had used the banned corticosteroid triamcinolone in 2012, under the therapeutic use exemption rule.

They said this was to prepare Wiggins, and possibly other riders supporting him, for the 2012 Tour de France. The purpose of this was not to treat medical need.