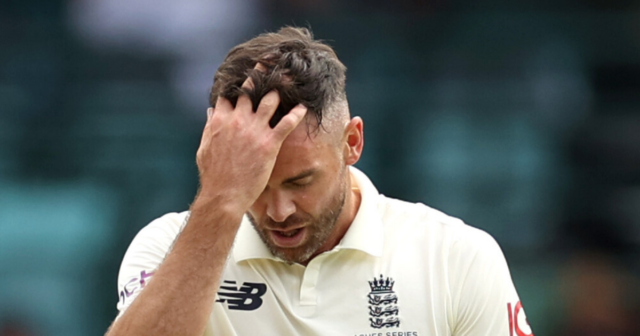 JIMMY Anderson is “praying” his England career is not over and pledged to “dig deep” to earn a Test recall.

Anderson and strike partner Stuart Broad were both controversially axed for next month’s West Indies tour after the Ashes debacle.

Former skipper and acting managing director Andrew Strauss claimed the pair, with 1,177 Test wickets between them, had been axed “to allow the team to move forward”.

And speaking for the first time since the “five minute phone call” from Strauss that informed him of the decision, Anderson vowed to do everything in his power to prove he is not finished at 39.

Anderson told the Tailenders podcast: “I’m praying that this isn’t the end.

“I think I’ve got one more go at digging deep. I’ve dug deep quite a lot over the last 20-years.

I still love playing the game.

“Obviously it was a bit of a shock and a disappointment to get that call to say I wasn’t going to the West Indies.

“But in the last two weeks, having processed it and chatted to a lot of people it’s important now that I try and focus on the fact that it is out of my control now.

“So I’ve got to focus on stuff that I can control – and that’s playing cricket and showing people what I can do with a ball in my hand.”

In what appeared a clear swipe at former team-mate Strauss, Anderson added: “There have been quite a few texts between myself and Broady in particular, getting some initial anger and frustration out.

“But once that was gone it’s about trying to look at stuff we can affect.

“There is likely to be a new director of cricket and new head coach in the summer so I just hope that whatever decision is made, it is talked about in the way it should be.

“Another frustration for me in the last couple of weeks is that a five minute phone call doesn’t clear so much up for you.

“It was obviously a difficult tour of Australia but I was happy with the way I bowled.

“Now I have just got to look to the summer and show people what I can do.

“I still feel I’ve got the hunger and passion to play. I feel in great shape and I just want to keep bowling.”

Anderson pointed out that he has defied conventional wisdom with his performances since turning 35, taking 160 Test wickets at an average of 21.7, compared to his first 480 scalps coming at a cost of 28.2 each.

He said: “In the last two, three, four years I’ve got better.

“Since I turned 35 my record has got even better so I know I’m not slowing down or losing anything. I don’t feel like I’m losing a yard of pace.

“As long as I’m bowling well all I can do is focus on Lancashire and the start of the season and to bowl as well as I can for them.”