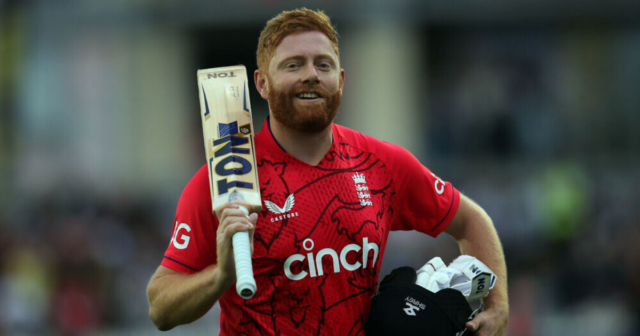 JONNY BAIRSTOW prepared for the game by lifting team-mate Sam Curran – and flexed his muscles again by hoisting huge sixes.

Bairstow cleared the boundary eight times in an innings of 90 as England went on a record-breaking spree in the first Twenty20 match against South Africa in Bristol.

Jonny Bairstow hit another 90 as his stunning form continued

Moeen Ali plundered the fastest T20 half century ever for England

The flame-haired Yorkshireman was not alone with England ransacking runs on a perfect pitch at a small ground and helped by some terrible fielding by the Proteas.

The team total of 20 sixes was another record (overhauling the previous number of 15) and the 33 runs that flowed from the 17th over by Andile Phehlukwayo was the most England have scored from a single over in any format, ever.

If watching the ball flying into the crowd is your thing, you would have been somewhere close to ecstasy.

England won by 41 runs and a victory at either Cardiff tomorrow or Southampton on Sunday will give Jos Buttler his first series triumph since taking over as white-ball captain from Eoin Morgan.

Bairstow was dropped four times – a couple of them real dollies – as South Africa’s fielding fell apart under the onslaught.

But he didn’t care one bit and joyously continued the form that brought him four hurricane centuries in England’s three most recent Test matches under skipper Ben Stokes and coach Brendon McCullum.

On Tuesday, Bairstow was pictured in the Bristol gym walking along and lunging with all-rounder Curran draped across his shoulders.

He insisted it had nothing to do with the ice pack that later appeared on his left knee.

Bairstow certainly looked in full working order with a bat in his hands and spectators are loving him at the moment. The cheers that greeted his arrival at the wicket and his big hits were the loudest of the day.

Buttler fell to a brilliant, back-pedalling catch at long-off by David Miller and the out-of-form Jason Roy struggled again with eight from 15 balls.

The acceleration came after Roy was out as Dawid Malan made 43 from 23 deliveries.

But it was Moeen who took England’s total into the stratosphere.

He hit six sixes, all elegant timing rather than brute force, and his fourth-wicket stand with Bairstow yielded 106 runs in just 5.5 overs.

Stubbs had gone for 20 runs in his single over in England’s innings but he showed he is a potential star of the future.

He pummelled EIGHT sixes, including a couple that were the two biggest of the day.

Amid the carnage, left-arm seamer Reece Topley had another good match and finished with 2-29 from his four overs.

And Chris Jordan conceding just three singles in the 18th was also crucial.