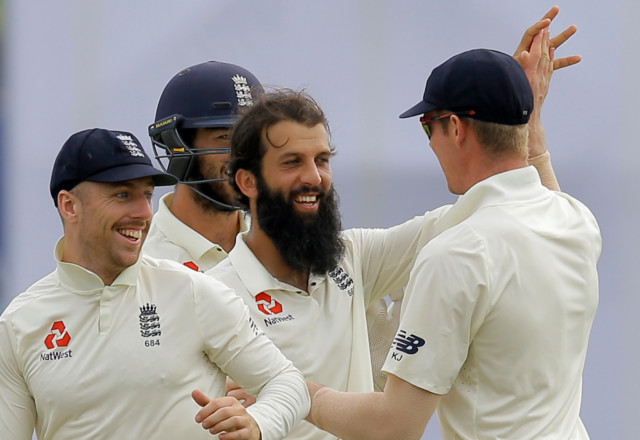 MOEEN ALI is in the frame for a Test recall this summer after being named in a 30-man squad for England’s training camp.

All-rounder Moeen made himself unavailable for the winter tours to South Africa and Sri Lanka after suffering fatigue and claiming he is often made a scapegoat for defeats.

Moeen Ali felt he was unfairly singled out over his form

But he now wants to play in the home series against West Indies and Pakistan.

Somerset’s Dom Bess is theoretically in possession of the spinner’s berth after doing well in South Africa.

Surrey’s Amar Virdi is the fourth spinner in the group and one of five to be chosen by England for the first time — alongside seamers Jamie Overton (Somerset) and Ollie Robinson (Sussex) and batsmen James Bracey (Gloucestershire) and Dan Lawrence (Essex).

Lancashire duo Saqid Mahmood and Matt Parkinson and Somerset’s Lewis Gregory have played white-ball cricket for England but are uncapped at Test level.

Chief selector Ed Smith said: “Moeen is a valued member of the England set-up and across formats he’s been a significant contributor.

“Moeen wants to be considered for selection in all formats. It’s always good if you increase the talent pool.”

The group will assemble in Southampton next week and live and train at the Ageas Bowl.

After an intra-squad match beginning on July 1, the group will be reduced to around 20 players for the three-Test series against the Windies.

Batsman Dawid Malan was not considered because of a calf injury.

Smith added: “We have 30 players to report back on June 23 and are excited about getting back into training.”

Head coach Chris Silverwood and batting coach Graham Thorpe will take charge of the Test team but other coaches have been seconded from county cricket.

Lancashire’s Glen Chapple, Kent’s Matt Walker and Richard Dawson of Gloucestershire will help while former England wicketkeeper Chris Read will work with the four glovemen in the camp.

England assistant-coach Paul Collingwood has been diverted to the white-ball team, who are due to face Ireland in three 50-over matches from late July.