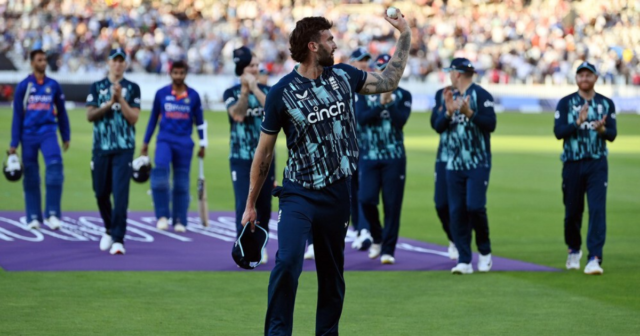 REECE TOPLEY reaped an incredible harvest of wickets and finished with England’s best figures of all time in one-day international cricket.

Topley’s historic elevation is a tribute to the perseverance of a man once so distraught by his seemingly endless injuries that he feared he would never play again.

He has endured a string of stress fractures and surgery and moved from Essex to Hampshire to Sussex and to Surrey in an attempt to find fitness and a permanent home.

Topley, 28, is praying his torment is a thing of the past and now he has been Player of the Match in two of his last three internationals.

He helped England win the third and final T20 match at Trent Bridge on Sunday with 3-22 and he doubled his haul here.

England made only 236 all out but Topley removed both openers as England reduced India to 31-4 and kept striking on his way to analysis that overtakes Paul Collingwood’s 6-31 against Bangladesh at Trent Bridge in 2005.

This victory was certainly welcome for Buttler after England lost the T20 series 2-1 and were humiliated by ten wickets at the Oval on Tuesday.

Buttler said: “Toppers has been fantastic, it was a special day for him. I’m delighted for him. He’s a very popular member of the team who brings energy to the group.

“He has an interesting story, coming into the game at such a young age with Essex and then all the back trouble and not knowing if he would play again.

“It’s given him a perspective and a real enjoyment when he is playing. He has all the attributes to be a fantastic international bowler.

“We didn’t bat particularly well but still managed to get to a challenging total. We were still positive and knew we needed early wickets to put India under pressure. We showed a lot of character.”

India’s top order was blown away on a two-paced pitch that offered uneven bounce.

Rohit Sharma, Shikhar Dhawan, Rishabh Pant and Virat Kohli might be superstars but they had no answer to the relatively unheralded trio of Topley, David Willey and Brydon Carse.

Wickets continued to fall and no Indian batsman reached 30.

Earlier, England collapsed from 41-0 to 102-5 with variations of the sweep shot frequently causing their downfall.

It was three years to the day since their memorable World Cup triumph in 2019 when they squeezed past New Zealand by virtue of hitting more boundaries as the match and super over were both tied.

Most of the batsmen remain but, although nowhere near as bad as being routed for just 110 all out 48 hours previously, England are struggling to fire with the bat in white-ball cricket at the moment.

Advertisement. Scroll to continue reading.
In this article:ofalltime, reecetopley, thesecond