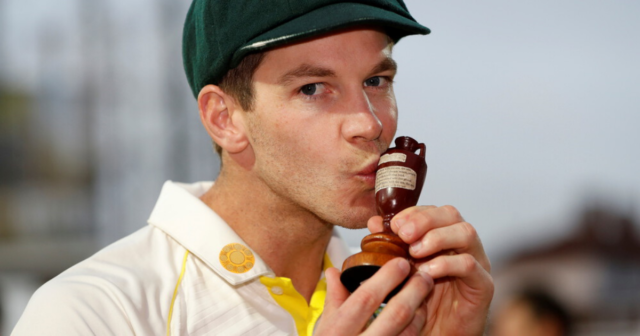 SHAMED Australia star Tim Paine is set to MISS the First Test of this winter’s Ashes series against England following his sexting scandal.

The Aussie wicketkeeper, 36, stepped down as captain last week after explicit texts sent to a female colleague were leaked.

And now Cricket Tasmania have revealed Paine is ‘taking a leave of absence from all forms of cricket for the forseeable future’.

A statement read: “Following discussions over the last 24 hours, Tim Paine has advised Cricket Tasmania that he will be taking a leave of absence from all forms of cricket for the foreseeable future.

“His place in the squad will be taken by Charlie Wakim.

“Cricket Tasmania will continue to support Tim and his family both professionally and personally over the summer.”

While the statement didn’t specifically mention international cricket, with the First Test of the Ashes starting on December 8, it’s unlikely Paine will line up alongside his team-mates.

Pat Cummins is likely to be named captain for this winter’s series, with Steve Smith controversially his vice-skipper.

Paine took over as Australia captain from shamed Smith in 2018 when the latter was caught up in the ‘Sandpapergate’ ball-tampering controversy.

But just three years later, the wicketkeeper resigned amid backlash over his conduct towards a then-colleague at Cricket Tasmania.

The incident occurred in November 2017, on the eve of the First Test of the Ashes series at the Gabba in Brisbane.

Paine sent an unsolicited picture of his penis to the woman along with a string of graphic messages.

The woman complained of sexual harassment in a letter to Cricket Australia, Cricket Tasmania and the Australian Human Rights Commission seven months later when she was charged with stealing.

Paine was internally investigated in 2018 when Cricket Australia became aware of the messages – after he had already been named captain.

However, he was not found to have breached the code of conduct.

Cricket Tasmania chairman Andrew Gaggin said the woman was earlier sacked by the organisation, but did not bring the messages up at the time.

Paine’s wife of five years, Bonnie, is understood to have been aware of the sexting but decided to stay with him.

Bonnie has continued to post regular snaps of their picture-perfect marriage since learning of her husband’s actions, with plenty of loved-up selfies, date nights, gushing posts and family photos with their daughter Milla, four, and son Charlie, two.

Since then, Paine led his side to retain the Ashes in English soil for the first time in 18 years in 2019.

Australia then lost a dramatic series at home to India in 2020-21 in which Paine was forced to apologise for calling opponent Ravi Ashwin a ‘d***head’.