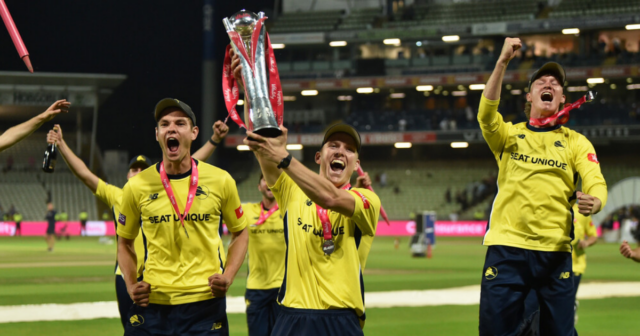 HAMPSHIRE won an incredible, near-farcical Twenty20 Blast final against Lancashire just moments after they thought they had already won it.

The match finished with smoke billowing around Edgbaston from a fusillade of fireworks mistakenly detonated in the belief that Hampshire were the winners.

This time it’s for real as Hampshire stars Ben McDermott and Ross Whiteley rejoice after a one run, last-ball win 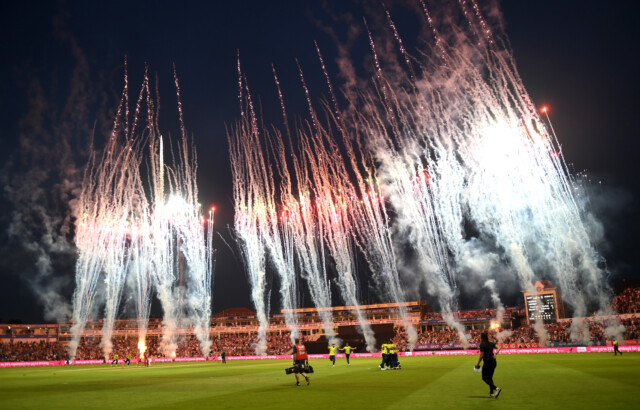 Hampshire Hawks celebrate spectacularly but a touch prematurely – after dismissing Richard Gleeson, only to find it was a no-ball 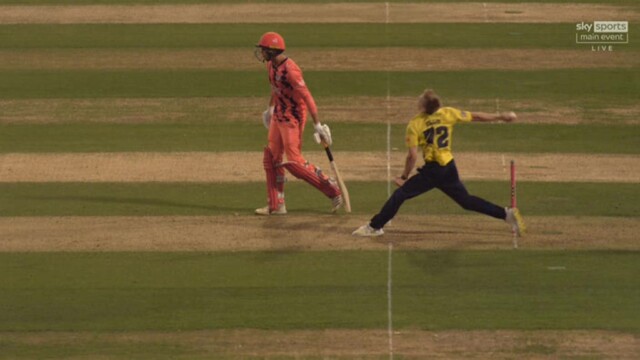 Here’s the Nathan Ellis no ball that sparked premature celebrations

The confusion came when Hampshire’s Aussie paceman Nathan Ellis bowled Lancashire’s Richard Gleeson with the final delivery of the 20th over.

Ellis charged 40 yards towards mid-wicket and was engulfed by his jumping and rejoicing team-mates. There were bangs and explosions as the pyrotechnics were let off.

Hampshire and everybody in the crowd thought they had won by four runs.

But suddenly people noticed that umpire Graham Lloyd – son of former England coach David ‘Bumble’ Lloyd – had his arm extended for a no-ball.

He beckoned the players back for the final delivery to be bowled again – and it was also a free hit.

There was a delay until the smoke dispersed and this time Gleeson swung and missed. He and Tom Hartley were able to scamper only a bye and Lancashire really had won this time by one run.

Lancashire thought the ball should still have been alive to allow the chance of a second bye to tie the match. But the umpires ruled the ball dead as Hampshire players were pulling stumps out the ground.

Lancashire captain Dane Vilas said: “The umpires use technology for everything else so we’d have liked them to ask for a replay to see if we completed two runs.” 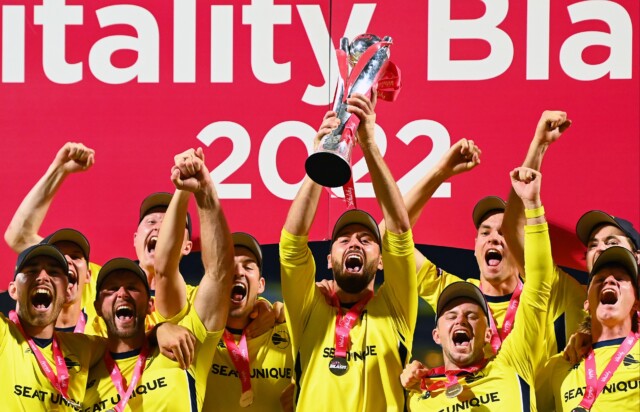 Hampshire captain James Vince insisted: “Dane came onto the field and was questioning the umpires. But they weren’t going to run two to the wicketkeeper so I’m not sure what he meant.”

Ellis added: “My heart sank when I saw the umpire’s arm sticking out – we’d been celebrating for 30 seconds. But James got us all together, let us take a breath and made sure everyone was aware of the situation.”

If the scores had been level, Lancashire would have won because they scored more runs in the power play. The first decider – number of wickets lost – was level at eight down for each team.

Hampshire really should not have been in the frame because Lancashire rushed to 72-1 in the eighth over chasing a modest target of 152.

But Vince has at his disposal the best bowling attack in the tournament and they started taking wickets and suffocating runs.

They join Leicestershire as the only counties to win the domestic T20 event three times.

Hampshire did not have any England players missing while Lancashire were able to include Matt Parkinson and Phil Salt, who were released by England from the one-day international squad.

But Jos Buttler and Liam Livingstone had to stay in Manchester preparing for today’s series-decider against India. 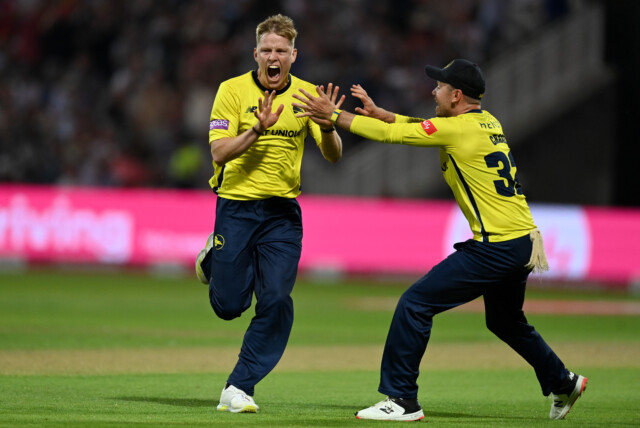 Wrist-spinner Parkinson earlier captured 4-26 and looked to have bowled Lancashire to triumph.

Parkinson has been around the England squad for a number of years but receives only limited opportunities.

And he has been dumped from the 50-over and T20s squad to face South Africa over the next fortnight with Adil Rashid returning from the Hajj pilgrimage.

England think Parkinson bowls too slowly but he was quick enough to dismiss four of Hampshire’s best batsmen – including Aussie Ben McDermott, who plundered 62 from 35 balls.

Parkinson also took 1-18 from three overs in the high-scoring semi-final against Yorkshire when the Red Rose men chased 205 for victory with eight balls to spare.

Hampshire beat Somerset by 37 runs in the other semi-final.