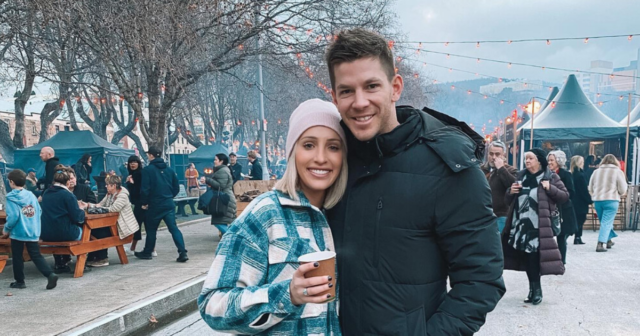 TIM PAINE’S sister’s husband reportedly sent X-rated pictures to the SAME woman as the Australian cricket star in a shocking twist to the sexting scandal.

The Aussie QUIT as Test cricket captain over an explicit sexting scandal in the latest debacle surrounding the team.

The decision came just 19 days before he was due to lead his country against England in the Ashes Down Under – although Paine is still set to be picked in the squad.

Paine took over from shamed Steve Smith in 2018 when the former skipper was caught up in the ball-tampering controversy.

But now he has resigned amid backlash over his conduct towards a then-colleague at Cricket Tasmania in November 2017, on the eve of the First Test of the Ashes series at the Gabba in Brisbane.

Paine, now 36, sent an unsolicited picture of his penis to the woman along with a string of graphic messages.

Although the leaked exchange showed both parties being flirtatious, the female co-worker was said to have been taken aback and offended by the content she received unwillingly.

Now the headmaster of an elite private school where Tim Paine’s brother-in-law coaches says he is ‘very disappointed’ after learning of the lewd text messages he allegedly sent a young woman and is considering sacking him.

The Herald Sun claims that Paine’s brother-in-law, Shannon Tubb, allegedly also sent explicit messages, including an ‘unsolicited’ picture of his genitals, to the same woman.

Tubb is coach of the first XI cricket team at Adelaide’s prestious Prince Alfred College – who have Ian and Greg Chappell among its alumni – but now faces losing his job after the principal confirmed they were reviewing his position.

Headmaster Bradley Fenner said: “We’re very disappointed, I’ve got to know Shannon well over the last couple of years. It was quite confronting.

Tubb is married to the cricketer’s sister and allegedly used Snapchat to send inappropriate messages to the staffer around the same time as Paine.

Cricket Australia were investigating Paine’s messages in mid-2018 after the woman complained to Cricket Tasmania when his alleged behaviour was uncovered.

Tubb was part of the Tasmanian setup at the time before moving to Adelaide to play cricket as a left arm spinner.

He began the role of coaching the first XI at Prince Alfred in 2019, but is now facing the axe over the alleged indiscretions.

Fenner added: “In the light of this news, we are reviewing Shannon’s position with us and will advise the school community about this in due course,

“We will consider what we do and we will look through this thoroughly and look at what has occurred.

“We want to take our time and make sure we get this right.

“We’ll do it in a measured and considered fashion and we’ll consider all the factors until we decide what we do [with Tubb].”

According to an intermediary between the woman and Cricket Australia said she first reached in 2018 to demand an apology, then wanted an apology and money to cover her legal fees – amounting to $40,000.

Sean Mulcahy told The Age: “I indicated that it was her intention to keep the matter private and that she was seeking an apology from Cricket Tasmania and her legal fees reimbursed.

“I told her that given the impending Ashes series, the severe fallout from the South Africa incident and subsequent sacking of then captain Steve Smith, that she could possibly command a large fee for her story. Her ultimate decision was to let the matter go and move on.

“It was always my understanding that she never wanted this matter to become public.

“She turned down the possibility of a big pay day to tell the story, yet she chose to stay quiet. I don’t believe she is the source of this story now being made public.”

Alongside his wife Bonnie, Paine told the Herald Sun that he had feared this story would become public one day.

He said: “I thought the issue was dealt with, but it always popped up around a big series, or at the start of the cricket season.

“Over the last three years, there have been numerous times where media agencies have put to us that they had evidence, yet they never chose to write it.

“As to why, I’m not sure, but nobody else had chosen to write the story, but I knew it was going to come out at some point, as much as I didn’t want it to.”