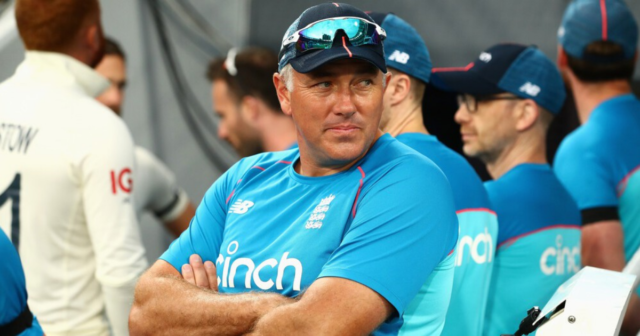 CHRIS SILVERWOOD remains convinced he is the right man to lead England out of their Ashes agony.

Despite an error-filled embarrassment of a campaign, Silverwood has no plans to review his position as head coach or even accept England have twice picked the wrong team.

He said there was an honest debrief after their crushing, 275-run defeat in the Second Test at which “a few things were thrown around” — although he means words rather than objects.

Silverwood is under the impression a “really good talk in the dressing room” is proof England can change course and that he is doing a good job.

Asked whether he can help England improve, Silverwood insisted: “Yes, I believe I can. We had those honest chats and I believe I have the right coaching staff around me to make that happen.

“When you take a job like this, you accept there will be talk. It is what it is.

“Do I believe I’m the right man? Yes, I do, or I wouldn’t have taken the job in the first place. You’re under pressure constantly, aren’t you?”

Silverwood is a likeable man with huge power because he is also chief selector.

But it is difficult to escape the thought that captain Joe Root needs a more forceful character as coach, somebody not afraid to turn on the hairdryer.

With the white-ball team, captain Eoin Morgan fills that role. No player takes liberties with Morgan, so Silverwood can be the good cop.

Root did criticise the players — including Stuart Broad and Jimmy Anderson, without actually naming them — after losing on  Monday.

But he does not possess Morgan’s sharp edge and also lacks true instinctive or original cricket nous.

There is no sign that Silverwood is capable of maverick thinking, either. So England need a hardliner with a brilliant cricket brain.

If I was in charge of the ECB, I would go to former Aussie skipper Ricky Ponting with a blank cheque and ask him to run the England team — although he would almost certainly say no.

THEY HAVE EVERYTHING THEY WANT ON THIS TOUR

It is almost as though Silverwood does not want to upset the players, especially in these Covid times.

But, crikey, they have everything they want on this tour — business class international flights, charters between cities, top hotels, plus wives, families and partners with them.

There is not a person covering this tour who does not think England’s selection has been horrendous.

It might not have altered the results but such basic mistakes make life easier for Australia. So do dropping catches, taking wickets with no-balls and feeble batting collapses.

But Silverwood claimed: “That’s the beauty of sport, isn’t it? It divides opinion.

“We played a spinner in Brisbane because we wanted variety in our attack — and I think that was the right thing.

“Then in the pink-ball game, we played all the seamers. We have some very strong seamers with a lot of experience, so we picked what we believed was the best attack to take wickets.

“No, I don’t accept we got it wrong. We picked the best attack for the conditions. I’ve been happy with our attack in both games.”

He added: “We’ve had two collapses and we need to put things right. We had a good talk in the dressing room which was healthy and needed.

“I think there are some lessons to be learned. We have to be better —  it’s as simple as that.”

Meanwhile, Australia have added quick bowler Scott Boland to their squad for the Boxing Day Test because Josh Hazlewood remains doubtful with a side injury.

Did you miss our previous article…
https://www.sportingexcitement.com/cricket/david-bumble-lloyd-74-retires-from-sky-sports-after-legendary-22-year-career-following-pals-botham-gower-holding