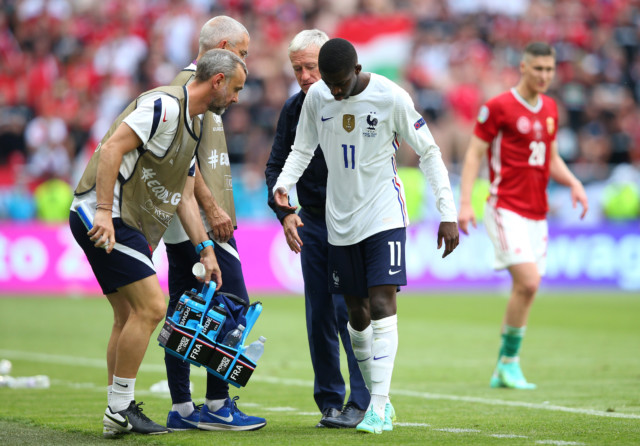 BARCELONA are reportedly set to be compensated £2.5million by Fifa after Ousmane Dembele suffered an injury on Euro 2020 duty.

The 24-year-old was forced to leave France’s Euro 2020 squad this week after he suffered an injury in the draw with Hungary.

Les Bleus had only brought on the winger as a substitute earlier in the second-half before he was struck down with a knee issue.

Dider Deschamps said after the game: “It’s a hit to the tendon, behind the knee, it will be necessary to check.

“He played on, he attempted a cross and felt some fairly significant discomfort. I brought him off. We will have to watch it.”

SunSport previously reported that Dembele is set to go under the knife to repair the damaged bicep femoris muscle in his right leg.

And the former Borussia Dortmund winger could be kept out for as much as four months which would see him return to action in October.

The report adds that the Catalans will receive £17,600 every 24 hours the Frenchman is out if he is absent more than 24 days.

Dembele’s operation for his latest thigh issue could take place in Finland where he was treated on in 2017 and last February.

France international Dembele had enjoyed a largely injury-free season with Barcelona to earn his place in the squad.

But his injury could scupper any plans Manchester United had to try and secure a transfer for him this summer.