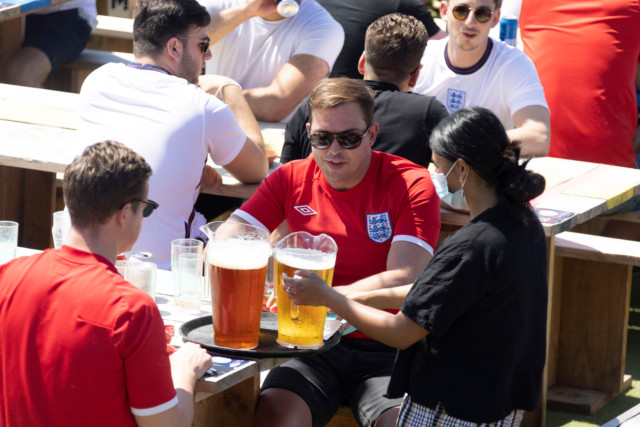 LOCKDOWN-weary Brits will enjoy the biggest party for 18 months as they watch the big match on TV at home or in pubs across the country.

Two million fans are expected to flock to 45,000 boozers north and south of the border — where 15 million pints will be sunk.

Another 15 million beers will be downed by fans at home.

Many pubs are fully booked, with £100million predicted to be spent on booze and food for the match.

Some 17 million will watch the prime-time 8pm game on ITV at home, with 2m in pubs and 1m on devices and catch-up services.

But heavy rain may dampen spirits for fans watching on big screens.

£100million is predicted to be spent on booze and food

Some 750 keyworkers will watch at Trafalgar Square, London, with 3,000 in Glasgow, 500 in Preston and ticketed events also taking place in Manchester and Birmingham.