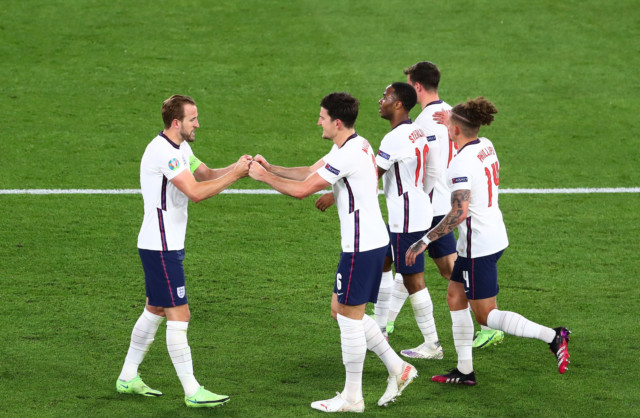 ENGLAND heroes Harry Kane and Harry Maguire are ‘not settling’ for just a semi-finals as they vowed to avoid a repeat of their World Cup heartbreak.

The pair were both on the score sheet as England thumped Ukraine 4-0 to reach the last four for a second consecutive tournament.

But they are still haunted by Mario Mandzukic’s extra-time winner for Croatia at the World Cup in Russia three years ago.

This time, when they lead England out next Wednesday at Wembley against Denmark, they promised to book their place in a first final since 1966.

Maguire, 28, told BBC: “It is a great feeling. Back-to-back semi-finals at a major tournament is a great achievement.

“I don’t want to be a party pooper. We have another big game coming up. We want to go further this time than at the World Cup.

“It is a great feeling that we are here and the way we have done it shows the progress we are making. Long may the improvement continue.

“We have great belief in the dressing room. It was an impressive performance. We now have to rest and recover.

“It is hard to soak it up when you have another big game coming and you know who you are playing and when.

“The dressing room will be a great atmosphere tonight and then we will wake up tomorrow and be focused again.

“This group are not settling for a semi-final, we want to go further.”

Manchester United defender Maguire made it 2-0 after captain Kane opened the scoring.

The Tottenham striker grabbed a second afterwards, before Jordan Henderson’s first international goal made it 4-0.

Kane, 27, added: “We were favourites, there was a lot of pressure and a lot of expectations.

“The performance was top-draw. Another clean sheet, four goals, it was a perfect night for us.

England are through to the Euros semi-finals

“We’ve got a big semi-final coming up. We’re on the right path. It’s where we wanted to be.

“We set out a vision before the World Cup of what we want to achieve. We are knocking it off step by step.

“Now it’s about getting over the line, the next step that we have got to do on Wednesday.

“The job is not done yet. There’s a lot more football to play. But I’m just ready for the next game and try to lead this team to the European final.”