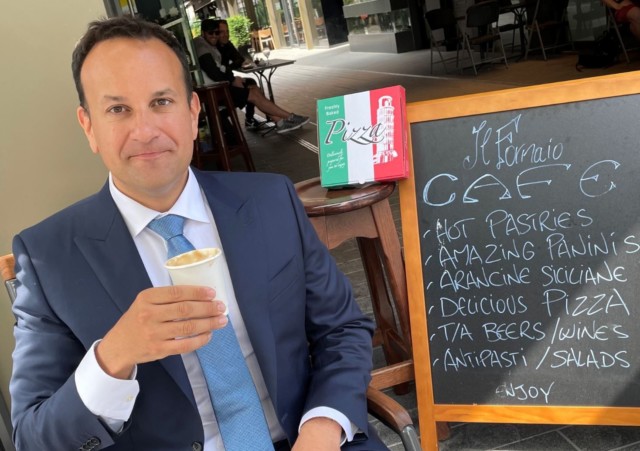 LEO Varadkar has been blasted for his “sly dig” at the England team ahead of their Euro 2020 final against Italy.

The former Irish PM faced huge backlash for his “pro Italy” tweet – with hundreds slamming him for “revealing where he loyalties lie”.

Varadkar posted a snap of him holding a cup of coffee in a cafe in Dublin.

He captioned the picture: “Enjoying a delicious cup of Italian coffee at the Il Fornaio Italian cafe on Dawson Street. It’s like Little Italy here.”

And his followers were furious at the not-so-subtle jibe.

Several argued he should be showing support to his neighbours, while one said he should get back to business and “do some work”.

Another user wrote: “This is clearly sly tacit support for the Italy football team against England.

“I suppose you have Irish sparkling wine at the ready for an Italian win.”

While one said: “Have you a sick note or are you skiving off work? Hope you won’t be claiming any expenses for today.”

Another joked the photo was ‘subtle’

One creative follower even edited a map of Ireland next to Italy, writing: “No doubt about where Ireland has positioned itself this week.”

But a few Varadkar fans jumped to defend him, saying he was “only drinking a cup of coffee”.

One tweeted: “It’s just a bit of bants, ffs, calm down everyone frothing at this.”

Another asked: “Is he not allowed a cup of coffee?”

And Foreign Minister Simon Coveney described England as “the best team in the tournament” alongside a photo of manager Gareth Southgate.

There is just one more game to win before England can finally confirm ‘it’s coming home’.

Kick off is at 8pm, with both the BBC and ITV having live coverage.