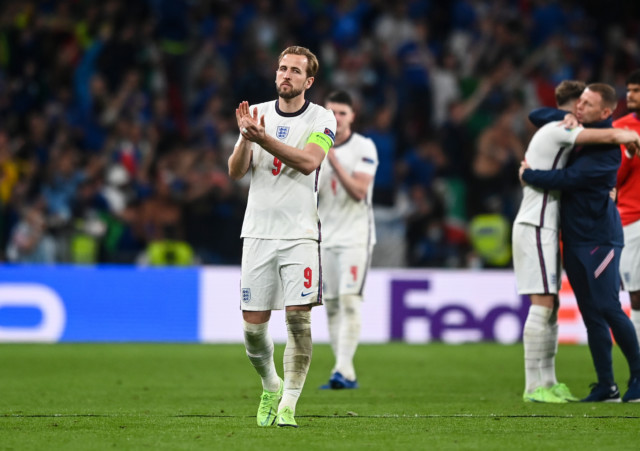 ENGLAND skipper Harry Kane admits the pain of losing the Euro 2020 final will ‘hurt for a long time.’

The Three Lions’ tournament ended in heartbreak last night as they suffered a penalty shootout loss to Italy at Wembley.

Harry Kane applauds England fans after their defeat to Italy

Tears were shed on the pitch as well as up and down the country after Bukayo Saka’s crucial penalty was saved by Gianluigi Donnarumma.

“But we’ve come so far and broken down so many barriers that this is not the end.

“We win together, lose together and will regroup together for the World Cup. Thanks for all your support this summer.”

Kane was one of two England players to score from the spot, although the Tottenham hitman had ZERO touches inside the Italy box in 120 minutes.

The 27-year-old admits defeat at Wembley has left a mark on the team but insists they’ll bounce back for the World Cup in Qatar next year.

He said: “We couldn’t have given more.

“Penalties are the worst feeling the world when you lose.

“It’s going to hurt but we’re on the right track and hopefully we can build on this.

“We went through our process and the players did everything we could but it wasn’t to be.

Three Lions boss Gareth Southgate hopes to lead the team next winter but said: “I don’t want to commit to something longer than I should.

“I never want to outstay my welcome.”

When pressed further on the winter tournament, he added: “That feels a million miles away.

“For certain this team can be better and can improve.