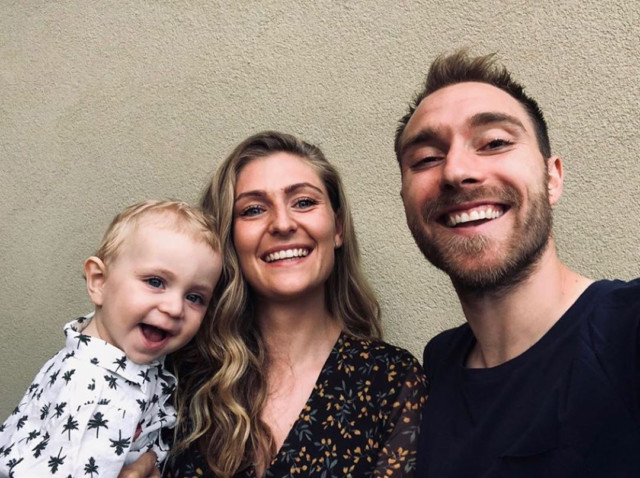 THE world gasped in shock when Christian Eriksen collapsed on the pitch on Saturday, in the middle of Denmark’s clash with Finland.

But for loyal love Sabrina Kvist Jensen – who leapt over the barriers to run to his side – it was a moment of pure terror.

Sabrina, Chris and little Alfie in a recent Instagram

Peter Schmeichel said Sabrina believed her partner “had died” during the shocking Euro 2020 incident, which was later confirmed to be a cardiac arrest.

The legendary goalie’s own son, Kasper Schmeichel, had to reassure mum-of-two Sabrina the Danish midfielder, 29, was still breathing after he collapsed.

The 26-year-old, who has stood by his side for nine years, moving around the world as his football career blossomed, was by his side when he woke in hospital.

Sabrina sacrificed her own life in Denmark to move to London, ditching her hairdressing career to become a WAG when Christian, 29, signed for Tottenham in 2013.

Christian is helped by medics after collapsing in Euros match 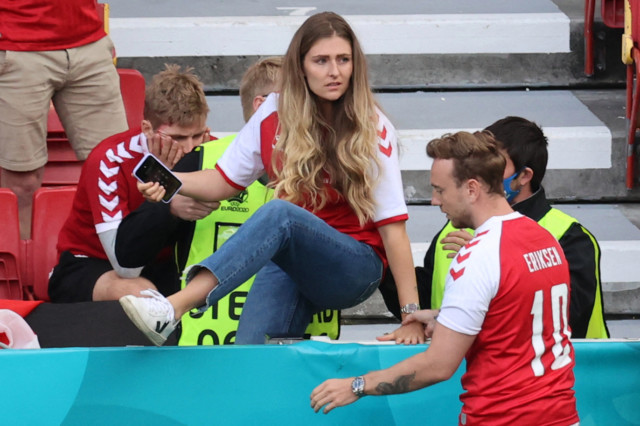 Terrified Sabrina climbs over the barrier to run to her man

After building a life in London, including a close friendship with Harry Kane’s wife Katie Woodland, she upped sticks again to followed him to Italy when he signed for Inter Milan last year.

The couple, who met when Sabrina was 18, are as devoted as ever and despite Christian’s huge salary of £6.5m a year, they have always shunned the wild parties in favour of quiet dinners with friends and nights out at music gigs.

The couple have shared romantic holidays in Dubai, Tanzania and Malaysia in recent years as well as rubbing shoulders with Danish royalty.

While other WAGS spend their days in beauty salons and shopping in designer stores, Sabrina keeps a low key existence, looking after three-year-old Alfie and his sibling, born in January this year. 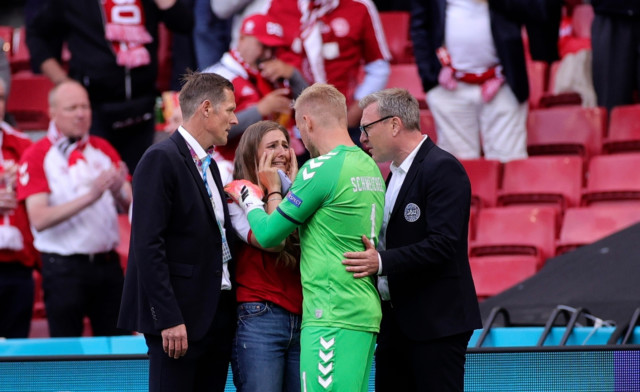 Sabrina is comforted by Kasper Schmeichel after Eriksen’s collapse 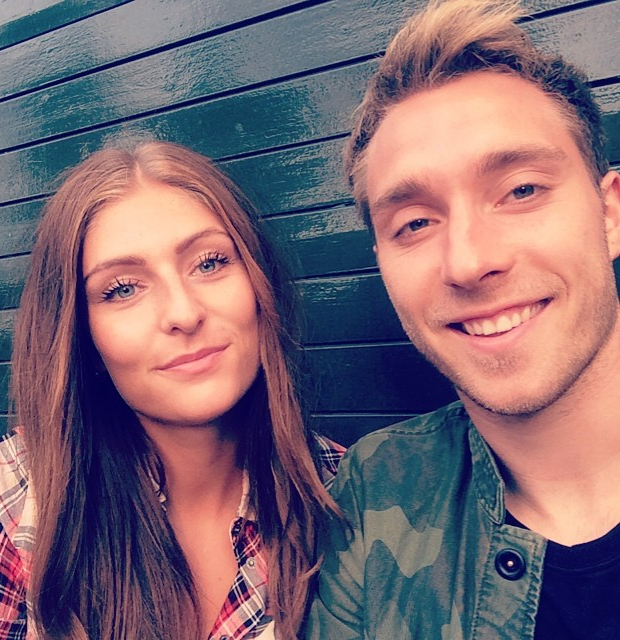 Born in Tommerup in Denmark, Sabrina was 18 and studying to be a hairdresser when she began dating Christian in 2012.

When he signed for Tottenham the following year, she initially stayed in Denmark to complete her beauty course, before following him to London where she briefly worked for a clothing brand.

Christian has admitted that adjusting to life as a premier league player in London was difficult for both of them. 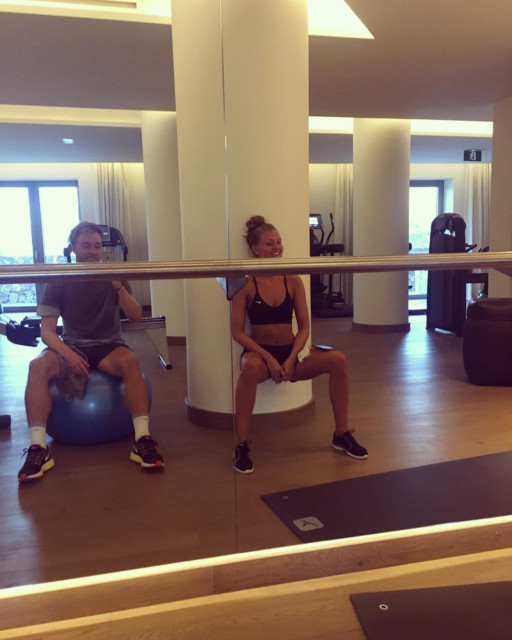 The couple work out in their private gym

“You have to learn how to cope physically and mentally, but I can handle the pressure and the demands because I live seven days a week for my job,” he says.

“That is very tough for my girlfriend. Of course I would like to go out in the city with her and friends, but it just doesn’t fit in with playing in England.”

In 2016, Christian signed a new longterm contract with Spurs and splashed out on a mansion in Hampstead, where a five-bed house costs between £7m and £28m. 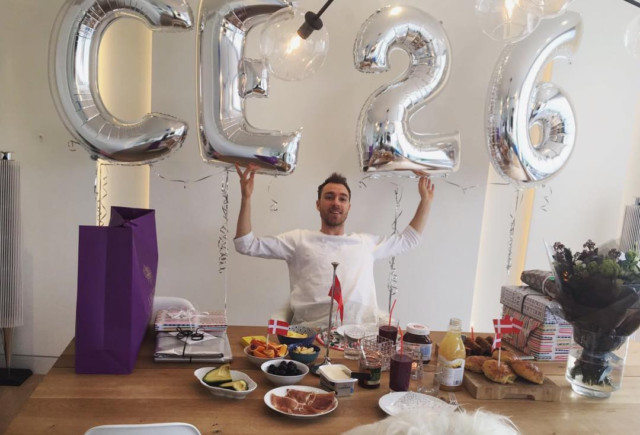 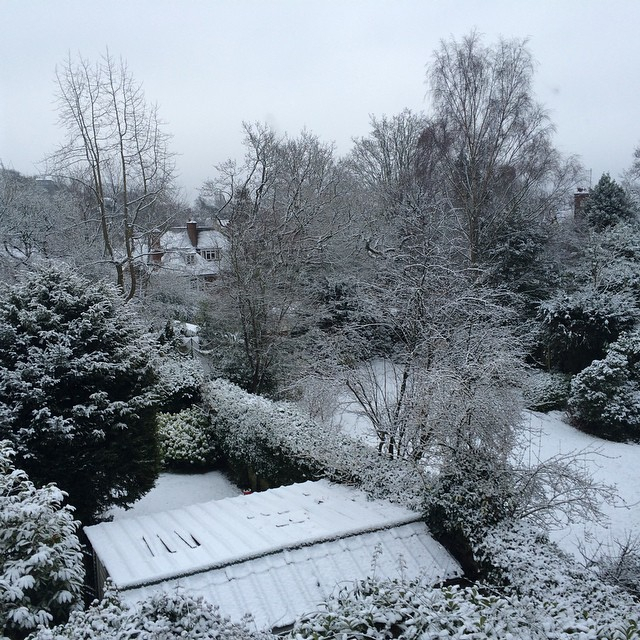 Snow in the garden of their Hampstead house

Fine dining and a date with royalty

Even before becoming parents, the couple shunned red carpets and glitzy parties for intimate meals with their closest friends, Harry Kane and Katie Woodland.

Tottenham Striker Harry, 26, took the Danish player under his wing as soon as he joined the club and Sabrina and Katie became close friends very quickly.

They bonded further over their pregnancies, with Katie giving birth to daughter Ivy just four months after Alfie was born, and both giving birth to a second child early this year. 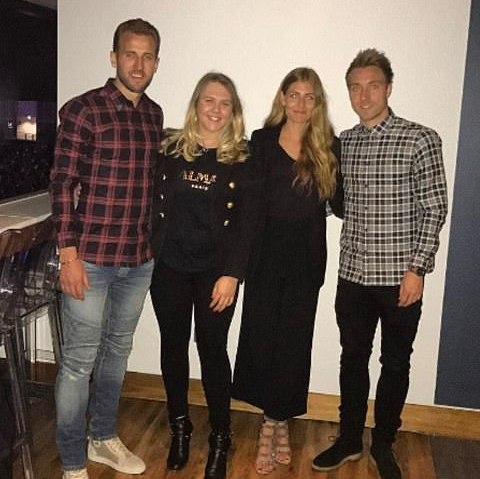 The couple dine out with Harry Kane and wife Katie

On couples’ nights out, before the couple moved to Milan last year, they choose high end London restaurants including Zuma, in Knightsbridge or Aqua Shard – where a steak costs upwards of £40.

Sabrina and Christian also love live gigs, and were spotted singing along at a Major Lazer gig in London before the pandemic. The four friends recently got together for a Bruno Mars concert, in 2019.

Although they swerve the limelight as much as possible, they do make exceptions for royals.

In 2014, they met the Danish Queen Magrithe II at an official bash in their native country, posting a glamorous picture from the event.

Chris wrote: “An absolute honour to meet the Queen of Denmark yesterday! A night to remember!” 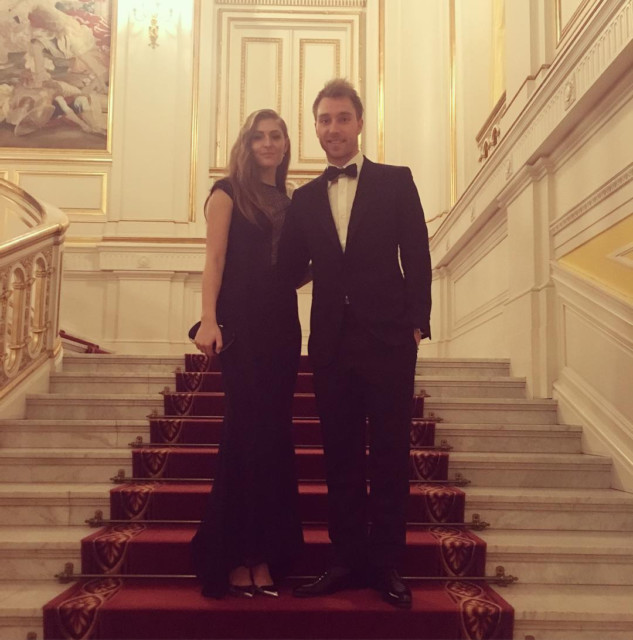 The couple after meeting the Queen of Denmark 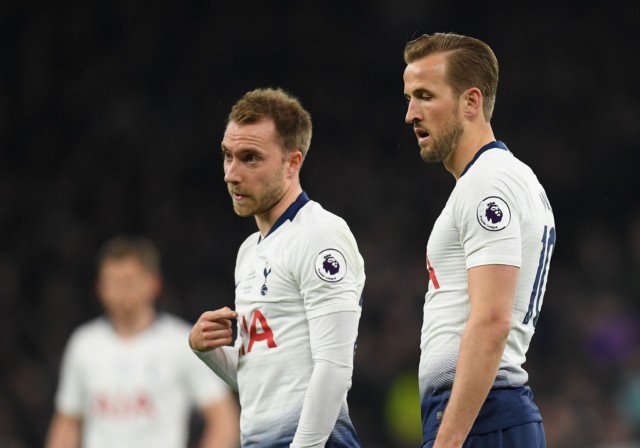 Christian on the pitch with buddy Harry

Holidays in Dubai and a safari in Tanzania

The couple like to travel and are adventurous in their destinations.

In 2017, before Sabrina fell pregnant, they took an extended break in Tanzania, where they went on a luxury safari holiday, costing around £5000 a head.

The couple were thrilled to see elephants, rhinos and lions as well as enjoying some downtown on stunning golden beaches.

Other pre-lockdown trips have included Dubai, where they were pictured riding a camel, and Malaysia, where they stayed in Kuala Lumpur.

The romantic pair have also taken breaks in Rome and Amsterdam, where they visited Christian’s old Ajax haunts. 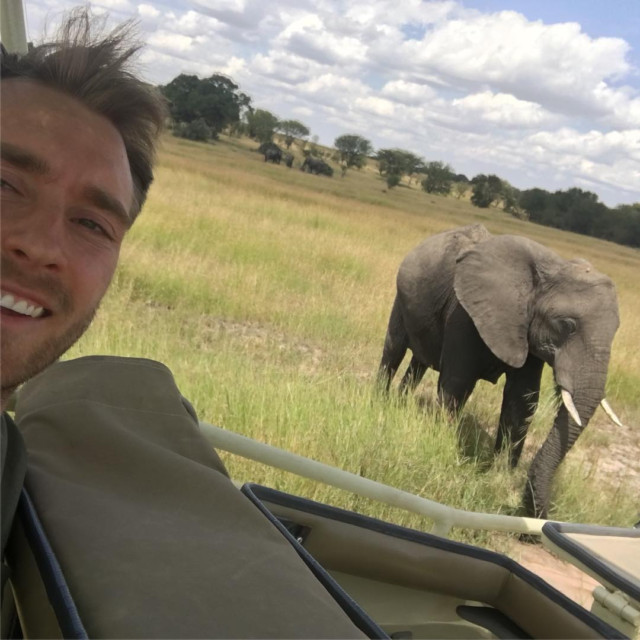 Chris pictured with an elephant in Tanzania 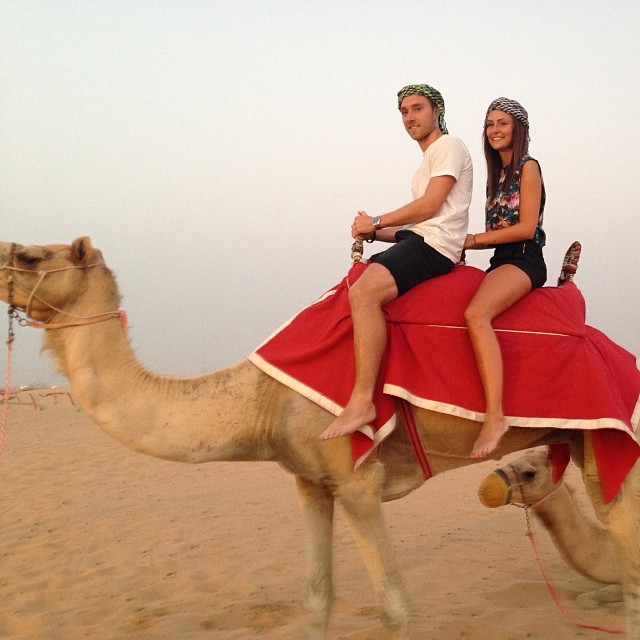 The couple on a camel in Dubai 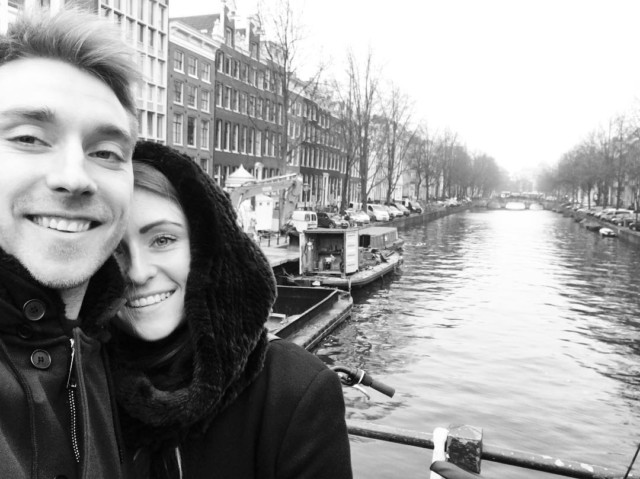 A short break to Amsterdam 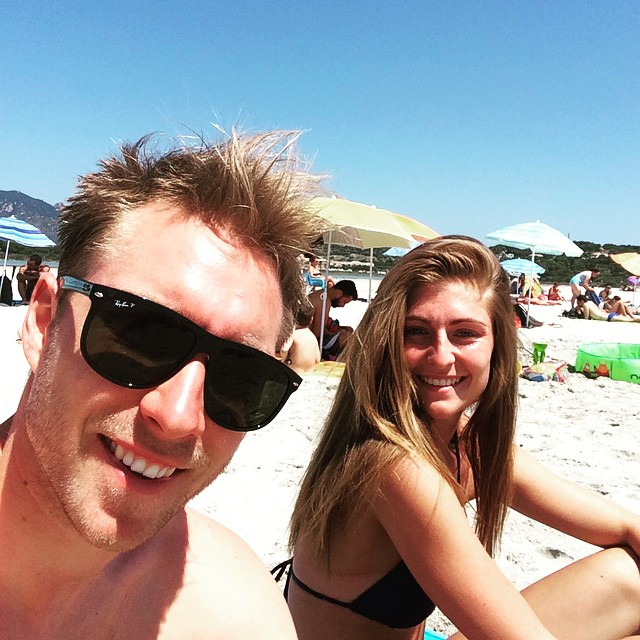 Beach destinations are a favourite getaway too

With a birthday on Valentine’s Day, it’s not surprising Christian likes to get a little slushy on his Instagram posts.

Every August he posts an anniversary picture, writing in 2017: “Five years with this incredible and wonderful person.”

In December 2017, the couple announced they were expecting their first child with a cute shot of themselves cuddling, with Chris holding the scan pic and Sabrina wearing a shirt reading “coming soon.”

He wrote: “Mum and dad to be. #proud” with a heart emoji.

And fatherhood has made him even more romantic.

On February 14, 2019, he posted a picture of Sabrina and Alfie with the message: “My birthday, Valentines and any other day of the year crew.”

On holiday last year, he posted a picture of Sabrina kissing Alfie with the words: “Not enough love for these 2!”

In January this year, Eriksen announced the arrival of baby number two – although the tot has never been publicly named.

Sharing a picture of himself with Sabrina, Alfie and the newborn, he wrote: “Family of four.” 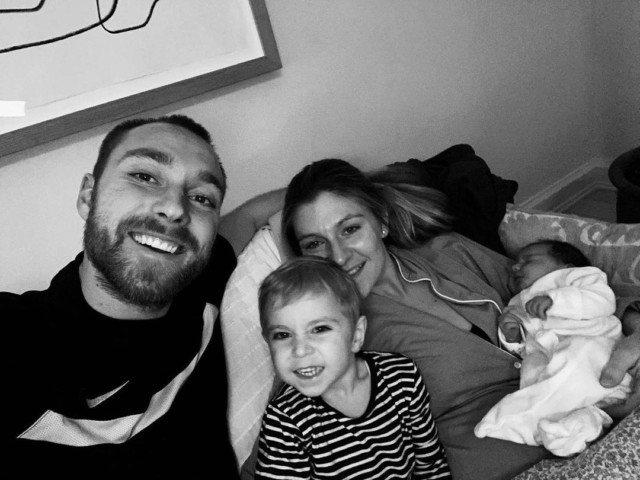 The couple shared the birth of baby number two in January 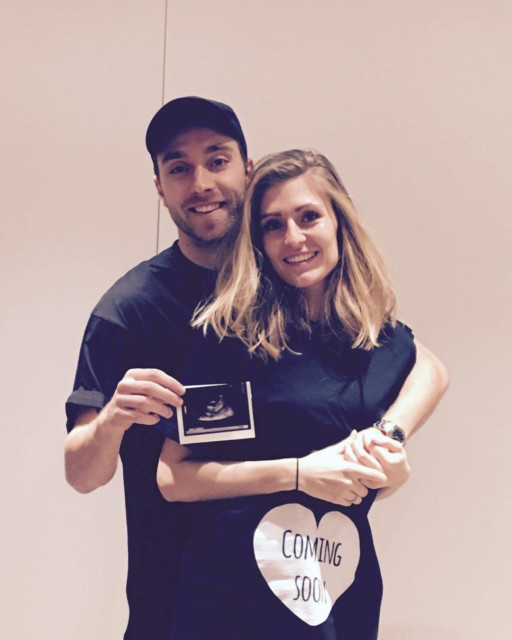 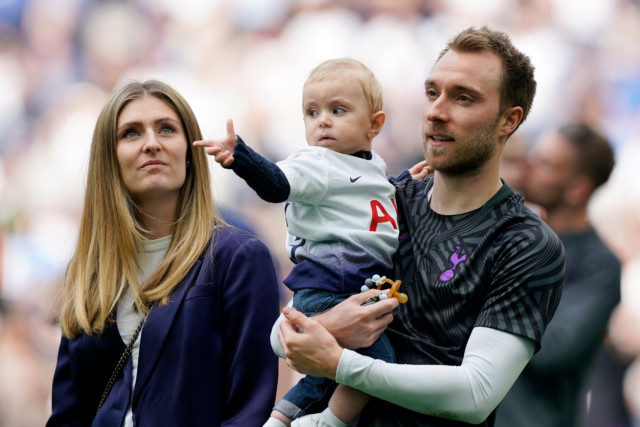 Sabrina joins her partner at a Spurs match

The path of this true love was running smoothly until 2019, when false cheating rumours put a bump in the road.

The couple were forced to rubbish online rumours that Sabrina had cheated on him with married team-mate Jan Vertonghen.

The original tweet spreading the fake news read: “Christian Eriksen’s wife has reportedly been caught having an affair with his team-mate Jan Vertonghen.”

But Christian stood by his partner, answering with a simple “Bulls***”. 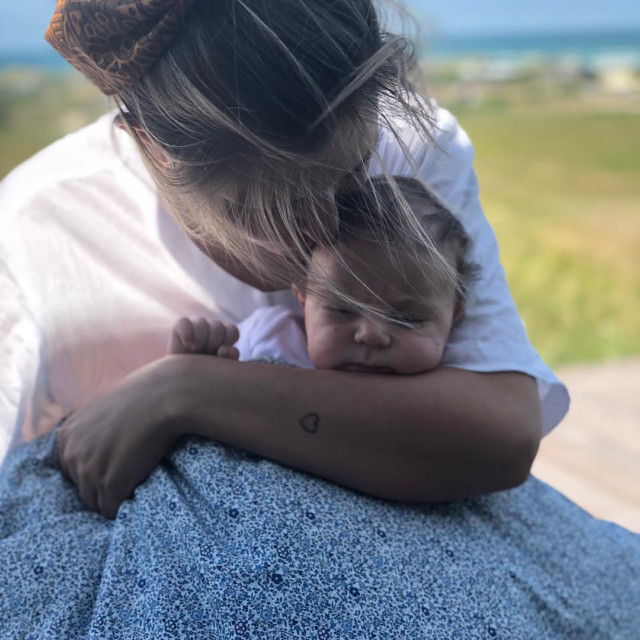 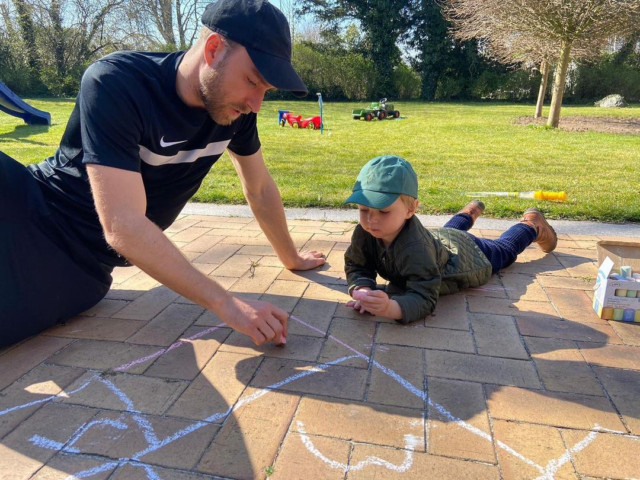 The Tweet also claimed the Spurs squad were involved in a bust-up – with Harry Kane involved – attaching pictures of Jan Vertonghen sporting a black eye.

But Jan replied with a series of emojis, including a heart next to Christian’s Twitter handle.

HOAR revealed that the injury was instead from an ‘accidental’ training ground collision with Eriksen earlier this season.

The vicious gossip would test any relationship but Christian stuck by his girlfriend as steadfastly as she has always stuck by him. 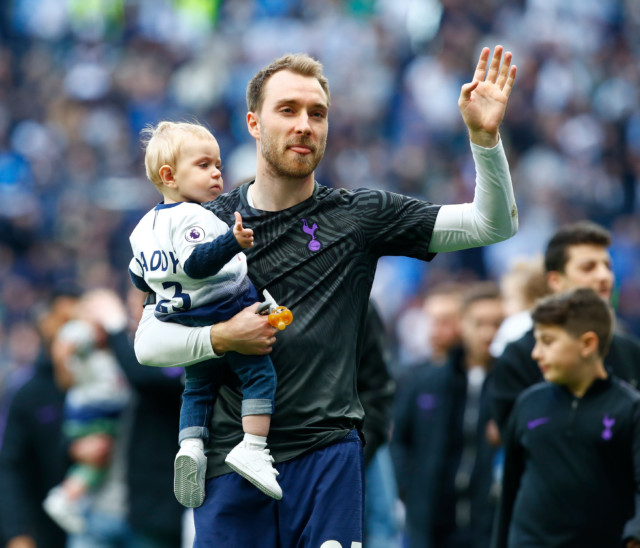 Christian with baby Alfie in a Daddy shirt

In the terrifying moment, this weekend, when she thought she had lost him, Sabrina’s world looked like it was crumbling.

But whatever his future holds, she’ll be thanking her lucky stars the love of her life is alive, on the mend, and will still be there to see their precious family grow up.