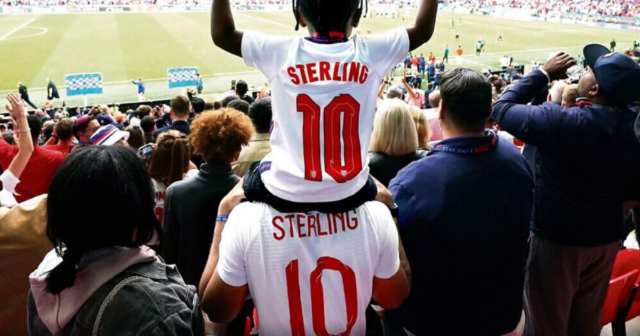 ON a warm, overcast morning 55 years ago, Nobby Stiles got up at 7am, walked down a busy London high street unnoticed and went to church.

Team-mate Bobby Charlton popped out of the team hotel to buy a couple of shirts while goalkeeper Gordon Banks went to the newsagents for a paper he was too excited to read.

Gareth Southgate’s Three Lions, like Alf Ramsey’s Boys of ’66, have got the nation dreaming of glory

Just hours later, Stiles and Co were at Wembley playing in the World Cup Final — the undisputed biggest game of football in the nation’s history . . . until today.

Gareth Southgate’s Three Lions, like Alf Ramsey’s Boys of ’66, have got the nation dreaming of glory once again as they take on Italy in tonight’s Euro 2020 final.

But their cup final days will be very different.

Southgate’s squad will wake at five-star hotel The Grove in Hertfordshire, where due to Covid ­protocol, they will be restricted to meeting only the people in their coronavirus bubble.

A team breakfast at 9am is planned, prepared by their chef, which will include cereals, porridge, eggs and juices.

The stars will have a team meeting and be encouraged to have a nap, enjoy a swim or make use of The Grove’s championship golf courses on its 300-acre grounds.

On July 30 1966, the England team were in the unassuming Hendon Hall Hotel — 12 miles away from The Grove.

There were no rings of steel, no high-level security. They all took breakfast in their rooms which included bacon, eggs and kippers and coffee.

Bobby Charlton recalled: “Over a hearty breakfast, I told Ray Wilson that I planned to fill some of the dead time by going to Golders Green to replace a shirt I had bought earlier in the week.”

Alan Ball said: “I roomed with Nobby Stiles. I went to see the Adidas representative who gave me the cash we were to receive for wearing the company’s boots — £1,000 a man.

“I walked back into our room and Nobby was still in bed. I tossed all the notes in the air so that they came down all over the place like confetti. We laughed like kids.”

Fans celebrate England reaching the final at Boxpark in Croydon

Gordon Banks added: “I joined half a dozen of the lads on a walk down Hendon High Street. Even at 8.30am the streets were buzzing and ­people came up to us to wish us luck. I bought a paper. I was too nervous to read it.”

Gordon Banks remembered: “On leaving the hotel I was staggered to see a crowd well in excess of 2,000 gathered around the forecourt.”

Alan Ball said: “The enormity of the occasion began to kick in. People were banging on the sides of the bus. There were banners everywhere.”

“When the class of ’66 arrived, they met their wives at the players’ entrance to give them their tickets.

Many of them had taken buses, car-shared or even hitch-hiked after breaking down to get there.

Today’s Wags have travelled down in style. Harry Maguire and Jordan Pickford’s wives took a luxury party bus down on Friday.

On Wembley Way, things will look very different today too. A giant arch is now the stadium’s iconic feature instead of the twin towers. 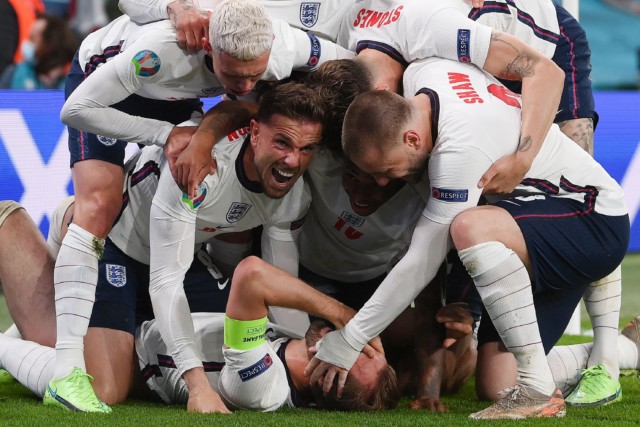 But as 66,000 fans exit Wembley Park Tube station from lunchtime today, the euphoria will be the same.

Many will have spent a small fortune to be among the Covid-restricted crowd — top tickets are £815 at face value while £54,000-a-pop is the rate on the black market.

Despite a whopping attendance of 96,924 then, Wembley was still 76 below capacity.

Touts mingled among the crowds ahead of the final trying to offload tickets — which cost ten shillings or £8.73 in today’s money — for little more than face value.

When Southgate’s warriors arrive at around 5pm, they will be escorted to the dressing room where shirts embroidered with the game’s details will be hung.

As in ’66, the players will assess the pitch before returning to the dressing room.

It is expected that Southgate will have given his main team talk before leaving for Wembley so the duties of inspiring the troops pre-match are due to be left to Harry Kane.

In ’66, manager Alf Ramsey. sent out the rallying call. 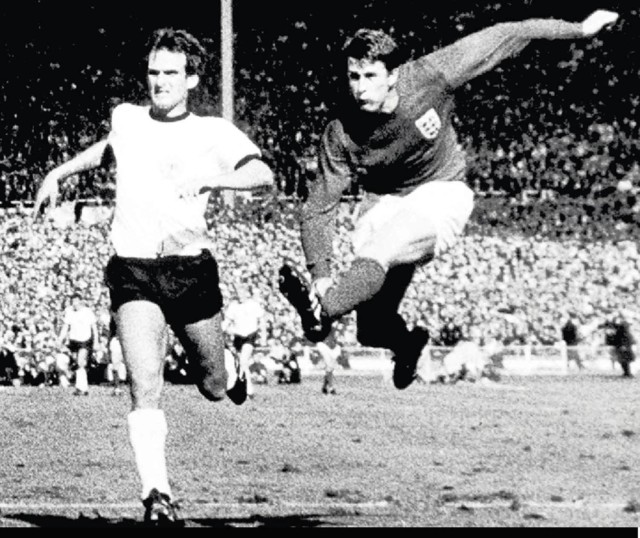 Banks said: “Nobby Stiles traipsed across the dressing room and into the toilet for the umpteenth time.

“Jack Charlton stood in front of a mirror applying Vaseline to his eyebrows. Martin Peters sipped tea. George Cohen leafed through the match day programme. How could he, at a time like this?”

Just before heading to the tunnel, Alf Ramsey told England’s talisman Bobby Charlton his job was to mark the German maestro Franz Beckenbauer.

Could Declan Rice be on similar duties today against Italy’s Marco Verratti?

Superstitions were as rife then as they are today. Bobby Moore had ironed his boot laces.

Luke Shaw will do his usual nervous sway in the tunnel, Kyle Walker will don the same pair of shin pads he’s had for 14 years while Jack Grealish will roll his socks to calf-height, a trend he has kept since they shrank in the wash.

Shortly before 7.50pm, Harry Kane will lead his side, adorned in their white shirts, into the Wembley tunnel.

They will hear the strains of Three Lions and Sweet Caroline before heading into the raucous cauldron.

Moore’s team wore red shirts due to losing a coin toss to get first choice.

The weather forecast is similar — 20 degrees, overcast with a threat of a shower.

At 7.55pm, the national anthem will be belted out.

In 1966, it was only the second time in the tournament that England had sung God Save The Queen after anthems were shunned to save controversial North Korea’s being played.

The first Englishman to touch the ball was a ball boy. 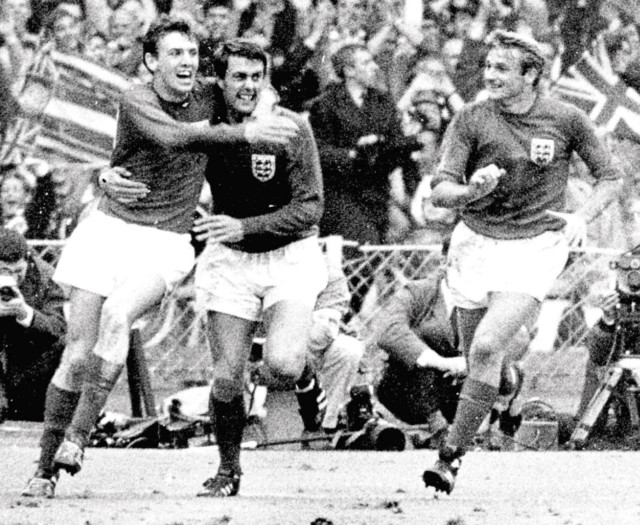 Ecstasy for England as Peters, Hurst and Hunt celebrate a historic victory at Wembley

Neil Rioch, now 65, from Erdington, Birmingham, said: “After only a few seconds of the final a West German player kicked the ball out of play and I gathered it.”

On that day, there wasn’t a replica shirt or advertising board in sight. Today, space on the electronic board can cost almost £500,000 a game.

At home in ’66, 32million settled in to watch the match. Up to 45million are expected to see tonight’s nail-biter.

In the stands, there was no Atomic Kitten, no Neil Diamond. The only songs that could be heard were Attack, Attack, Attack and When The Reds Go Marching In.

England led 2-1, until a Wolfgang Weber scored the equaliser, a minute from the final whistle to send the game into extra time.

Ball said: “We went ahead when Hurst had a shot half-cleared and Peters forced it in. Surely we had won.

“The fans were celebrating with a ­minute to go when Weber equalised. I learned later that my wife Lesley had fainted when the Germans equalised.”

Before extra-time kicked off Alf Ramsey told his team: “You have won the World Cup once. Now you must go and win it again.”

In the first period of extra time, Hurst ­thundered a shot off the bar and towards the goal line.

It was too close to call. The Russian linesman famously gave the controversial goal.

Hurst said: “I probably had the worst view in the stadium to see whether it had gone in. I’d fallen over and was looking over my shoulder. I turned away to celebrate but it wasn’t kidology.

But there was no doubt about Hurst’s goal for his hat-trick with the last kick of the match.

As fans flooded on to the pitch, thinking they had heard the final whistle, Hurst fired the ball in.

He said: “Bobby Moore’s delivery was inch-perfect. It caught my bony instep, so that’s where the power came from. My dad had taught me that, to kick with my left foot, in the back garden in Chelmsford.”

Southgate’s men are close to experiencing that same rare ecstasy.

Bobby Charlton said: “When I see my brother Jack  . . . we embraced on the field of celebration after he held out his arms and said, ‘What about that, kidda?’”

Thousands of Union flags were waved as captain Moore proudly walked up the steps to the royal box, where the Queen presented him with the Jules Rimet trophy.

Tonight, a plinth will be erected in the centre of the pitch facing the royal box.

UEFA president Aleksander Ceferin will hand over the trophy, with The Duke of Cambridge in attendance, to the winning captain.

England prays it will be Harry Kane.

If it is, fans can expect a statue of him to join that of Sir Bobby Moore outside the famous old stadium.