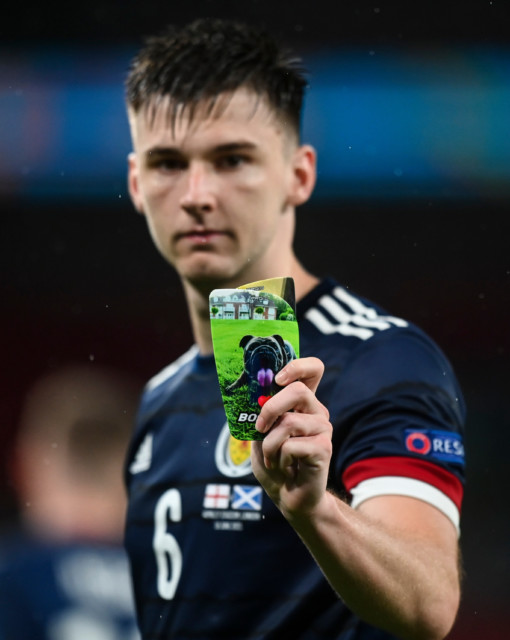 KIERAN TIERNEY had a special message hidden on his shin pads during his paw-fect performance at Wembley on Friday night.

The Arsenal defender put in a terrier’s performance in Scotland’s 0-0 draw with England in the Euros.

And Tierney, 24, showed a picture of a dog on his shin pads after the draw.

It’s unclear who the mystery pet is or belongs to and Tierney has never been pictured or seen with it.

The Scottish left-back was part of a dogged team performance on Friday night that kept England well and truly on their leash.

Tierney has been labelled as a humble potential future Arsenal captain in the past.

Last year he was seen carrying his kit for an FA Cup tie in a Tesco bag for life.

And he followed up a few months later by turning up for a Europa League game in freezing temperatures wearing just a t-shirt.

The Arsenal defender helped Scotland keep England on their leash

The 5ft 10in left-back has showed it’s all about the size of the fight in the dog on many occasions for both Arsenal and Scotland.

It was a ruff night at the office for Gareth Southgate’s men on Friday as they missed the chance to go top of Group D.

Harry Kane and Co were all bark and no bite as they struggled to create any kind of clear-cut opportunities on Friday night.

Czech Republic hold top spot after a 1-1 draw with Croatia at Hampden Park earlier in the day.

England will meet Czech Republic at Wembley at the same time in a battle for top spot.

And Scotland will need to beat Croatia in their final game on Tuesday to have a chance of reaching the last 16.

Steve Clarke’s side will poodle back to Glasgow and prepare for their final group game at Hampden Park.