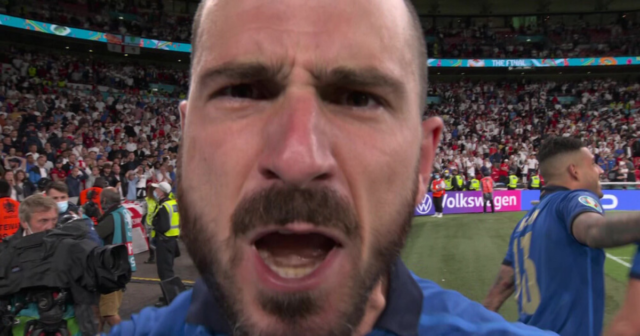 The Juventus star was at the heart of Roberto Mancini’s penalty shoot-out victory at Wembley, firing his spot-kick perfectly past Jordan Pickford while also playing a key role in the 1-1 stalemate.

And the veteran, who guzzled beer in post-match celebrations, has now fired back at England fans who reportedly mocked Italian cuisine with chants during the match.

Bonucci said: “You all still have to eat a lot of pasta!”

He then continued: “They wanted to bring the cup back to England but we are the ones who will take it to Rome by plane.

“Absolutely (we were motivated by It’s Coming Home).

“We heard it day in, day out ever since Wednesday night, since the Denmark game that the cup would be coming home to London.

“Sorry for them but actually the cup will be taking a nice flight to Rome and that way Italians all over the world can savour this competition.

“It is for everyone, we said from day one it was for them and for us.

“We were strong, louder than the noise of the whistles.

“During the warm-up I said to my teammates: ‘Let’s plug our ears and play as we know how’.

“This team hasn’t lost in 34 games, we’re a fantastic team. It’s an absurd enjoyment… we are having fun with this.”