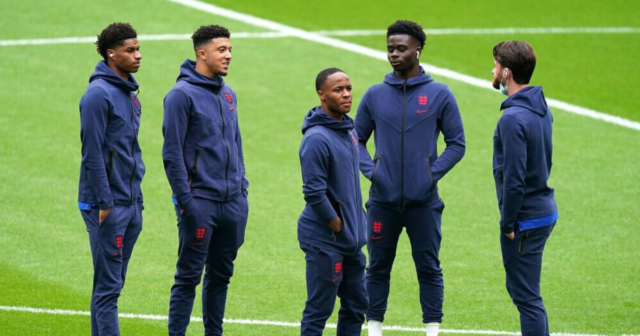 MINISTERS will order tech giants to hand over details of racist trolls who abused black Three Lions players on Sunday night to “make an example” of them, according to a report.

Ministers want tech giants such as Twitter or Instagram to hand over details more readily in a bid to crack down on the issue, The Times reports.

A government source told the newspaper: “We want real-life consequences for the people who are tweeting this abuse.

“We need to find out who these people are and make examples of them.”

The source added that such a move is “not beyond the capabilities” of big tech firms.

Rashford, Sancho and Saka were all targeted with a wave of disgusting racist abuse following England’s loss in the Euro 2020 final. The country has since rallied behind the three stars in opposition to the racist vitriol.

Twitter said over 1,000 tweets have been deleted that violated its policy and a number of accounts have also been suspended.

A mural in honour of Rashford in Withington, Manchester, was defaced within hours of England’s loss to Italy, in what cops are treating as a racist incident.

In an emotional Instagram post last night, Rashford said he could take criticism of his performance on the field “all day long”, but added: “I will never apologise for who I am.”

It came as England defender Tyrone Mings hit out at Priti Patel in her condemnation of the racist abuse faced by his teammates, after she previously called players taking the knee “gesture politics”.

Patel said last night that the abuse was “vile”, writing on Twitter: “It has no place in our country and I back the police to hold those responsible accountable.”

But Mings hit back, accusing Patel of “stoking the fire” after she previously refused to criticise fans who booed the team for taking the knee in protest against racial injustice.

He said: “You don’t get to stoke the fire at the beginning of the tournament by labelling our anti-racism message as ‘Gesture Politics’ & then pretend to be disgusted when the very thing we’re campaigning against, happens.”

The PM, the Duke of Cambridge and the FA have all condemned the abuse, while England manager Gareth Southgate described the hate directed at the players as “unforgivable”.

And The UK Football Policing Unit (UKFPU) has launched an investigation into the racist abuse targeted at players online and said it is working to trace and identify the perpetrators.

Separately, the Metropolitan Police said they had also launched an investigation into the “utterly abhorrent and totally unacceptable” reports of online abuse.

Advertisement. Scroll to continue reading.
In this article:marcusrashford, socialmedia, threelions