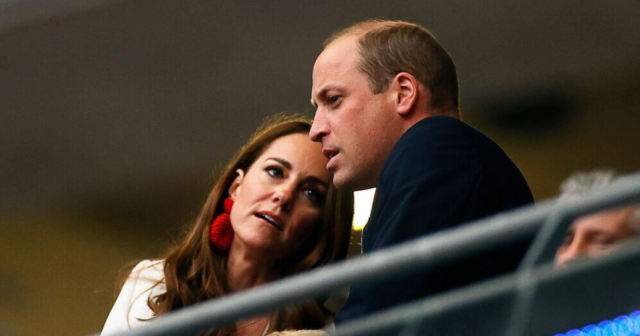 The royal – who was at yesterday’s game with wife Kate and son George – said he’s “sickened” at the disgusting trolls who targeted Bukayo Saka, Marcus Rashford and Jadon Sancho.

Prince William has spoken of his fury after vile trolls launched racist attacks on young Lions after last night’s heartbreaking defeatHe, Kate and son George looked sombre as the game came to an end yesterday

And Gareth Southgate has told journalists the attacks are “unforgiveable” – and it’s “just not what we stand for”.

The Duke of Cambridge, who serves as president of The FA, tweeted: “I am sickened by the racist abuse aimed at England players after last night’s match.

“It is totally unacceptable that players have to endure this abhorrent behaviour.

“It must stop now and all those involved should be held accountable. W.”

The prince was seen punching the air last night – before the evening ended with tears for England after a mighty fight against Italy.

After the loss, racist morons began attacking three of the team’s black players with monkey emojis and vile abuse.

Boris Johnson is among those to condemn the sick jibes.

“This England team deserve to be lauded as heroes, not racially abused on social media,” he said.

The Met Police has vowed to launch a probe.

The force said: “We are aware of a number of offensive and racist social media comments being directed towards footballers following the Euro 2020 final.

“This abuse is totally unacceptable, it will not be tolerated and it will be investigated.”

And Home Secretary Priti Patel tweeted: “I’m disgusted that England players who have given so much for our country this summer have been subject to vile racist abuse on social media.

“It has no place in our country and I back the police to hold those responsible accountable.”

It was a late night for the seven-year-old, who was comforted by his dad after the loss.

The stadium erupted within the first two minutes of the game after Luke Shaw netted the ball, bringing the team one step closer to bringing the trophy home after a 55-year drought.

And little George looked on top of the world as he celebrated the goal, beaming at William and hugging his mum in celebration.

But Italian Leonardo Bonucci managed to nab an equaliser in the 67th minute, before clinching a win on penalties.

Despite the initial excitement, George, dressed smartly in a suit and tie, was left devastated – and Kate too was pictured with her head in her hands.

And after the game, William described England’s Euro 2020 defeat as “heartbreaking”.

He told the team: “You’ve all come so far, but sadly this time it wasn’t our day.

“You can all hold your heads high, and be so proud of yourselves — I know there’s more to come.” 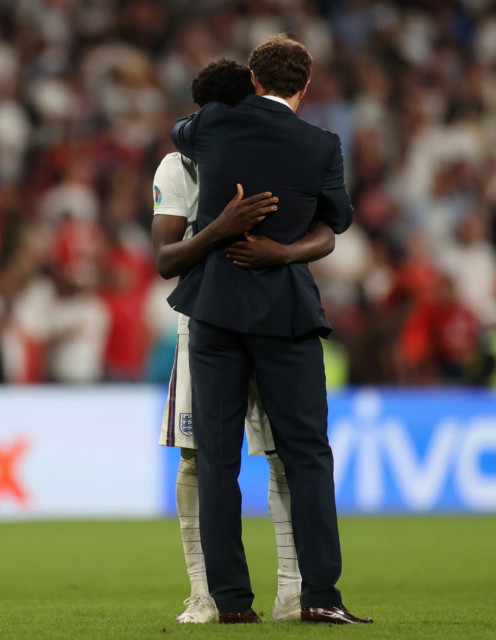 Southgate embraced Saka on the pitch after the devastating defeat
Advertisement. Scroll to continue reading.
In this article:bukayosaka, garethsouthgate, marcusrashford