Which teams are out of Euro 2020?
Advertisement 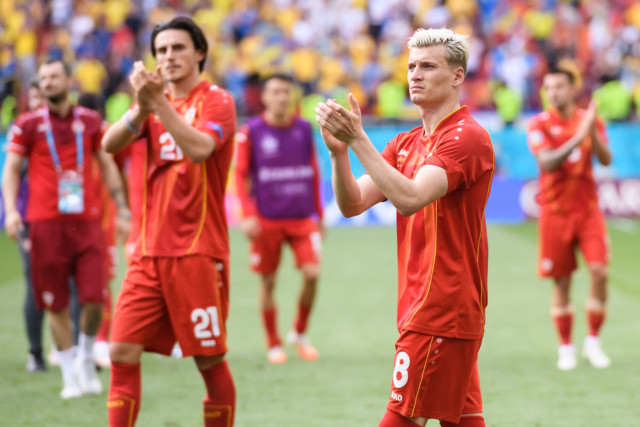 EURO 2020 is here and teams have a greater opportunity than ever before to progress to the knockout stages.

With 24 teams competing, 16 will get out of the group and live to fight another day.

North Macedonia were beaten by Austria and Ukraine

But that still means eight unfortunate sides will be going home early.

No teams have been eliminated from Euro 2020 yet.

However, North Macedonia could become the first team to go out when Holland face Austria later on tonight.

Any result other than an Austrian win will see the North Macedonians heading back to the Balkans after their final game in the Netherlands.

Though North Macedonia can finish on the same points as both Austria and Ukraine and surpass their goal difference, that will not help under the Euro 2020 system.

Uefa rules state that head-to-head record decides which team goes through and North Macedonia have lost to both the Austrians and the Ukrainians – but not the Dutch.

In contrast Turkey, who sit bottom of Group A with 0 points, still have a mathematical chance of finishing above Switzerland and forcing their way through.

Does third place in the group go through to the last 16?

Third place DOES go through to the last 16, and Portugal even won Euro 2016 after finishing down in third.

However, this only applies to the four best third placed teams from the six groups.

Northern Ireland were the lowest ranked third placed team to qualify at the last Euros.

They finished on three points with two goals scored and conceded and a goal difference of zero.

Did you miss our previous article…
https://www.sportingexcitement.com/football/euro2020/how-do-concussion-substitutes-work-and-can-the-player-come-back-on-the-field-2