Why do some England fans boo taking the knee?
Advertisement 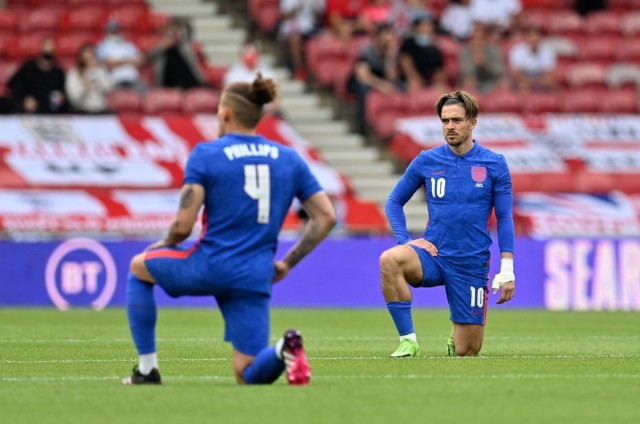 ENGLAND enter Euro 2020 with tensions between the players and some fans rumbling on over the taking of the knee.

The Three Lions have stated that they will perform the gesture throughout the tournament, though a section of supporters have made their disapproval known by booing it before games.

In England’s warm-up matches against both Austria and Romania, a mix of boos and applause for the gesture was heard.

Why do England take the knee?

England, like all Premier League clubs over the past season, state that they take the knee in support of racial equality.

“That is not the reason the players are doing it. We are supporting each other.

“So, I was pleased that was drowned out by the majority of the crowd, but we can’t deny the fact that it happened.

“I think the most important thing for our players to know is that all their team-mates, all the staff, are fully supportive.

“I think the majority of people understand it.

“I think some people aren’t quite understanding the message, and I suppose we are seeing that across a number of football grounds at the moment.”

And Jordan Henderson said: “I think it shows that, if there’s still people booing because we’re standing together against racism, then there really still is a problem and we’ve still got to fight it and stand together on that.

“It shows even more that we have to keep going, keep fighting it. From our side, it’s about being together and doing what we think is right – and that’s what we feel is right.” 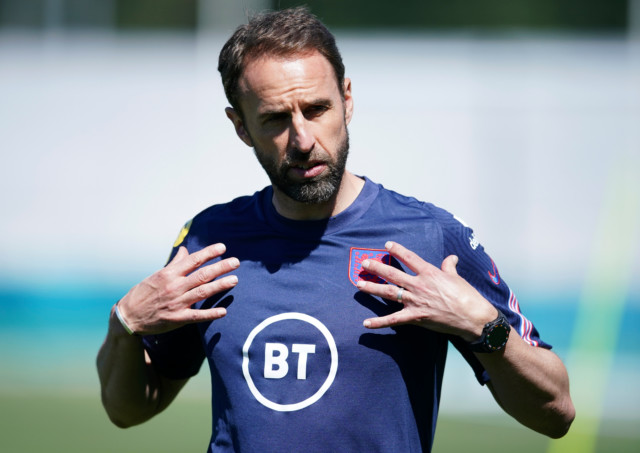 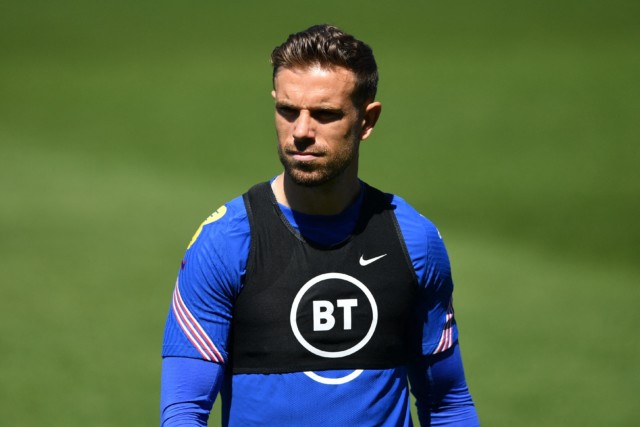 Why do some England fans boo the knee?

Sadly it is likely that some England fans are booing the idea of racial equality itself, though none are known to have openly said this.

The most common complaints from supporters revolve around the perception of it being a political gesture, the players “lecturing” them and a perceived association with the Black Lives Matter movement.

Andrew, a fan from Lincoln who booed, told BBC Radio 1: “Booing is a way football fans can communicate dissatisfaction.

He added that he sees the knee as “an identity politics agenda that focuses on black people and skin colour, when as far as I am concerned we are all England fans regardless of colour.”

And he finished: “Some seem to genuinely believe booing is an act of racism – I reject that.”

A twitter user who supported the booing stated: “If I want to watch politics, I’d switch on Westminster Live.” 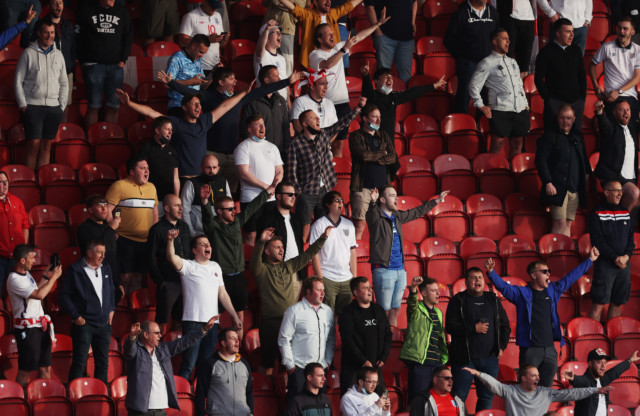 The Free Speech Union, who represented a Cambridge United fan who was banned until he could satisfy the club he wasn’t a racist, provided the following explanation for his actions.

“In the case of our member, he didn’t boo because he disapproves of BLM, but because he wants to keep politics out of football.

“Why shouldn’t he be allowed to express that view, provided he does so in a lawful and peaceful way?

“We take no view on the politics of BLM – we would be taking our member’s side if he’d been punished for applauding the players’ gesture or roaring his approval.”

How did taking the knee start?

Kneeling throughout history has been a gesture of prayer and Reverend Martin Luther King led civil rights protesters to take the knee in prayer in 1965.

However, the knee as a gesture in sport was started by NFL player Colin Kaepernick in 2015.

The then-49ers quarterback began the protest by sitting down during the US national anthem.

He stated of the gesture: “I am not going to stand up to show pride in a flag for a country that oppresses black people and people of color.

“To me, this is bigger than football and it would be selfish on my part to look the other way.

“There are bodies in the street and people getting paid leave and getting away with murder.” 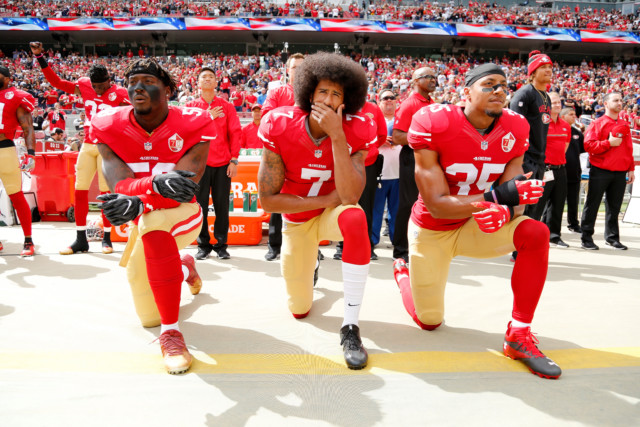 Taking the knee in sport was popularised by Colin Kaepernick

However, after Kaepernick sat down, a former US Green Beret – Nate Boyer – wrote him a personal letter explaining that while he supported the cause he was protesting for, he was disappointed that he had chosen to express his views in the way he did.

After that, Kaepernick decided to meet up with Boyer and they agreed that rather than sitting, Kaepernick would kneel for the anthem.

That gesture, they perceived, was a more respectful one as it is typically used as to honour fallen members of the armed forces.

Do footballers take the knee for Black Lives Matter?

Though supporters of the Black Lives Matter movement do take the knee, footballers have stated that they are not kneeling for this reason.

The knee in English football was adopted after the murder of African-American George Floyd by white police officer Derek Chauvin in May 2020.

At the time, the Premier League and its clubs explicitly did support Black Lives Matter, with the organisation’s logo sewn onto every player’s shirt.

However, after a statue of Winston Churchill was vandalised by BLM protesters in London and the BLM UK Twitter account criticised the state of Israel, the Premier League moved to distance itself from the cause. 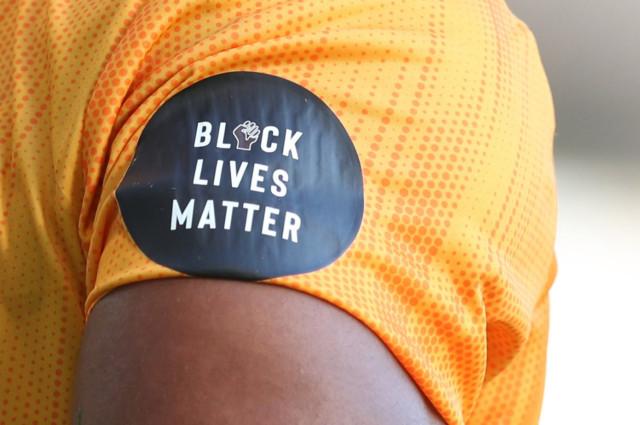 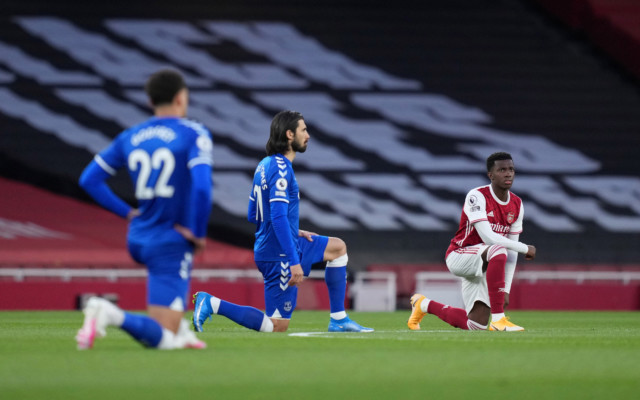 The Black Lives Matter U.K. account tweeted: “As Israel moves forward with the annexation of the West Bank, and mainstream British politics is gagged of the right to critique Zionism, and Israel’s settler colonial pursuits, we loudly and clearly stand beside our Palestinian comrades.

When the 2020/21 season started, English football clubs agreed that rather than kneeling in solidarity with Black Lives Matter, they would kneel in support of a new No Room For Racism campaign.

However, a number of clubs continued to display the Black Lives Matter logo prominently in their stadiums throughout the season.

What is the FA’s view on taking the knee?

She added: “When you’re booing players taking a knee, you are booing the right of those individuals to have a voice and to protest against inequality.”

The FA has not given a view on whether it supports action being taken against fans who boo the knee.

However, unlike overt racist abuse, booing the knee is not thought to be a criminal offence.

"When you're booing players taking a knee, you are booing the right of those individuals to have a voice and to protest against inequality."

What has the global reaction to the knee been?

Most national teams do not generally take the knee in their matches, but do if they are playing against England, Wales or Ireland.

(Scotland have been taking the knee but chose to stop in March and Steve Clarke has stated that they have yet to make a decision on kneeling in Euro 2020.)

However, this is not always the case, with Czech Republic refusing to kneel against Wales and Poland doing likewise against England.

Both teams chose instead to perform the “apolitical” anti-racism gesture of pointing to the Uefa Respect logo on the sleeves of their shirts. 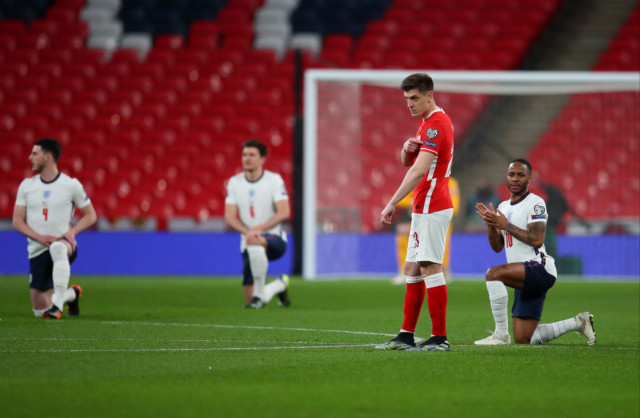 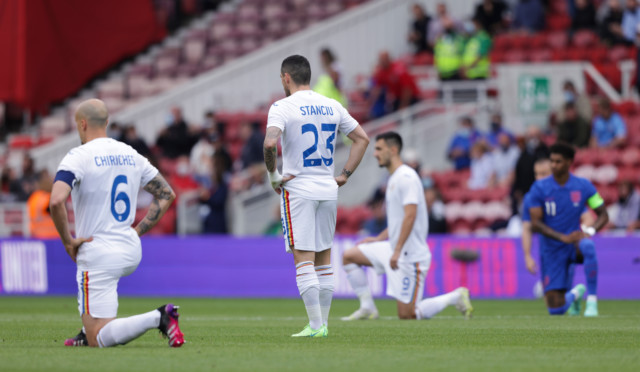 Two Romania players chose not to kneel against England

Nicolae Stanciu stated that he had refused to kneel in support of Slavia Prague team-mate Ondrej Kudela, who received a ten-game ban from Uefa for racially abusing Rangers’ Glen Kamara.

The other player, Ionut Nedelcearu wrote on Instagram that he “did not feel that I should do it out of a simple obligation.

He added: “My view and attitude towards life is that the messages that we as members of the society should send against racism should be much clearer and should concern all the manifestations of racism that we experience in our daily lives.

“From my standpoint it is rather hypocritical to believe that we fulfill our duty against racism simply by obeying an order to kneel!”

In Hungary’s Euro 2020 warm-up with Ireland meanwhile, the Hungarian team chose not to take the knee while the Irish did and were roundly booed by the 15,000 crowd.