Why don’t Scotland have to isolate after Billy Gilmour tested positive for Coronavirus?
Advertisement 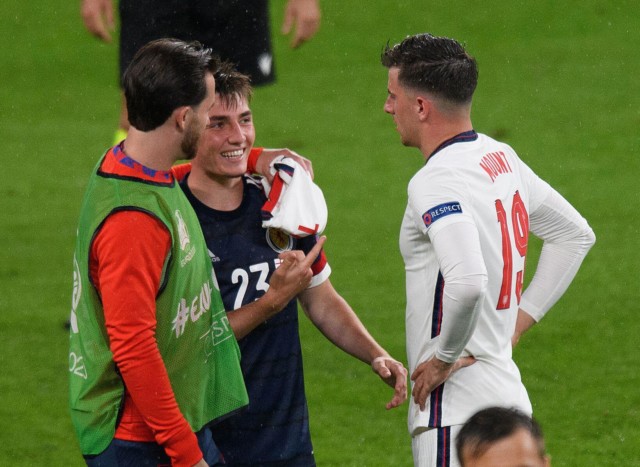 ENGLAND are smarting after Mason Mount and Ben Chilwell were forced into isolation.

The pair were pinged as close contacts by Public Health England after Scotland’s Billy Gilmour tested positive for Coronavirus.

Yet none of Gilmour’s Scotland team-mates have been asked to isolate ahead of their final game with Croatia.

Why don’t Scotland have to isolate?

Ironically, English regulations have saved Scotland from self-isolation while punishing the Three Lions.

The reason no Scotland players have to isolate is because Public Health England have not identified any of them as “close contacts” to Gilmour.

According to NHS England, a close contact means “close face-to-face contact” (under one metre) for any length of time, including talking to somebody or coughing towards them.

Close contact can also mean being within two metres of somebody for more than 15 minutes or travelling in a small vehicle with them.

As there is no concrete proof that any of these things apply to Gilmour’s Scotland team-mates, they are not required to self-isolate.

In contrast, Mount and Chilwell were caught on camera embracing Chelsea team-mate Gilmour after England’s 0-0 draw with Scotland.

Interestingly, had Steve Clarke’s men set up a training base in Scotland, the entire team would have been forced into isolation.

However, Czech Republic and Croatia booked a Scottish training base back in January, leaving Scotland to set up camp in Middlesbrough.

Ultimately both the Czechs and Croats changed their plans and decided to base themselves in their own countries, precisely because of Scotland’s strict isolation rules.

What has Gareth Southgate said about the situation?

The England manager was perplexed by Public Health England’s decision, pointing out that Scotland had shared a dressing room with Gilmour.

He said: “I don’t want to cause a drama for Scotland, but if you are all in the dressing room together, where does everything stand?

“I really don’t know how all that works. All I know is we are in the situation and we’re complying with Public Health England.

“There’s nothing else we can do. I don’t want to make life difficult for Steve Clarke.

“I want him to do well. He’s a great guy and we’ve got a very good relationship.

“The last thing I want to do is make his life more difficult, frankly.”