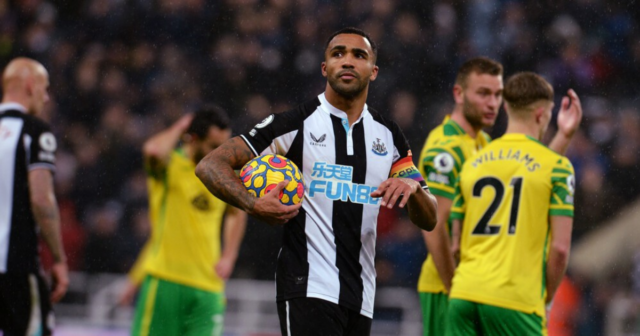 Ciaran Clark was sent off for hauling down Teemu Pukki after his poor clearance allowed the Norwich man to run through on goal just nine minutes into the match at St James’ Park.

That left Eddie Howe’s men up against it, but they battled hard despite their numerical advantage and took the lead through Callum Wilson’s second half penalty.

However, Pukki scored a brilliant equaliser late on as the Canaries threatened to win the clash, but Newcastle held on for a 1-1 draw.

Even though he praised the battling the qualities of the relegation strugglers, Shearer did admit: “I’m still scared stiff whenever the ball goes into the final third for Newcastle as it’s individual errors.

“I mean I just don’t have a clue what they’re going to do – I’m not sure they do at times.

“They did defend well and did react to the sending off and stick together as a group. But the individual errors are still there.

“Clark had one, (Fabian) Schar had one that could have cost them. The goalkeeper makes one I think he could have got two hands when the cross comes in.

“These are basic individual errors that at this level you’re going to be punished.”

Newcastle are bottom of the Premier League table on just seven points after 14 matches and six points off safety.

And despite the countless millions of their new Saudi owners, Shearer is still unsure whether the Magpies will have enough to avoid the drop.

He added: “I’m not convinced they will have enough. They now look to Saturday’s game against Burnley, again, you’re going to hear it’s a must win game over the next few days.

“Same as tonight. It’s been 14 games (winless) and the longer it goes on the harder it becomes.”