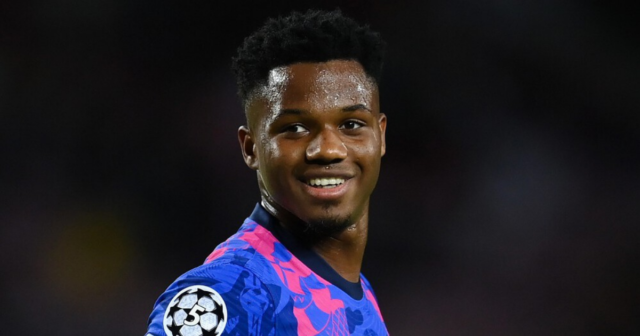 BARCELONA wonderkid Ansu Fati confirmed that he turned down offers from the Premier League to stay at the Nou Camp.

Fati was linked with a move to Manchester United and Manchester City but his constant priority was to stay at Barca.

And so the Blaugrana managed to tie the winger down to a six-year deal with a staggering €1BILLION (£846million) release clause.

The Spain international confirmed that he did receive offers from abroad, such as England, but told his agent Jorge Mendes that he wishes to stay in Catalonia.

Fati said: “Yes, I’ve had offers from abroad, but my dream was to be here.

“From the first day I told Jorge Mendes that my first option was always to stay at Barca.

“He understood it perfectly and I am very happy that the club has trusted me”.

United had a £130m bid rejected for Fati during this past summer transfer window.

The Red Devils were among Europe’s biggest hitters keen to sign the forward, who is already becoming a Nou Camp favourite.

The 18-year-old rose through the ranks seven years later and joined the senior squad where he has turned into a prolific prospect.

The Spaniard has so far registered a total of 15 goals and six assists in 48 appearances across all competitions.

Fati is already leaving his mark in Spain’s national team as he scored his first goal against Ukraine last September, becoming the Furia Roja’s youngest ever scorer – a record that had stood for 95 years.