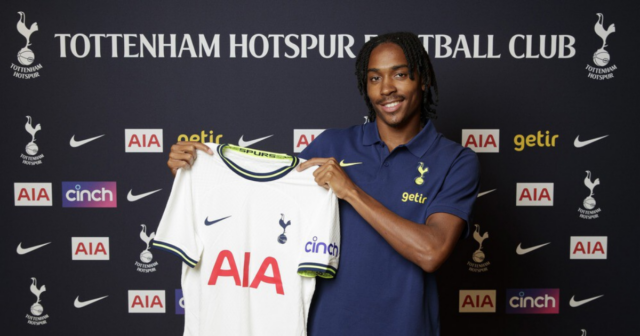 ANTONIO CONTE has revealed it was the club rather than him who picked right-back Djed Spence to be Tottenham’s sixth summer signing.

Djed Spence has become Tottenham’s sixth signing of the summer

Conte said: “Spence is an investment of the club.

“The club wanted to do it. I said ‘OK, this player is young but he showed he can become a good, important player for us’.

“The club decided to buy him.”

Spence will now compete for the right wing-back berth with Matt Doherty, Emerson Royal and Lucas Moura, who Conte is remodelling from his natural position as an attacking player.

Spurs finally landed their man after over a month of negotiations and could eventually pay up to £20m for Spence if all the add-ons are taken into account.

The youngster, who won promotion while on loan at Nottingham Forest last season, has signed a five-year contract with the North Londoners.

He labelled the move as “a dream come true” and is excited to link up with players he watched on television as a kid.

Though there will be one familiar face in the squad already to help the new-boy settle into his new surroundings — as Spence came through the Fulham ranks with Tottenham left wing-back Ryan Sessegnon.

Spence said: “I grew up with Ryan at Fulham, through the ranks from Under-12s to Under-16s.

“We played a Premier League tournament together and won that. He went with the first team at a young age and obviously his career has gone very well so far.

“It’s a privilege to be here. I can’t wait to meet the players, the staff and the manager and just train with everyone and gel with the team.”

While another signing is not ruled out, Tottenham are heavily focused on offloading a number of fringe players now.

Tanguy Ndombele, Harry Winks, Gio Lo Celso and Sergio Reguilon were all left out of Spurs’ tour of South Korea last week and can all leave.

The futures of Royal, Joe Rodon, Japhet Tanganga, Bryan Gil and Pape Matar Sarr could all be away from the club too, albeit temporarily in some cases.

Meanwhile, Covid-hit pair Bissouma and Forster made their way back from Seoul yesterday having had to stay behind in isolation.