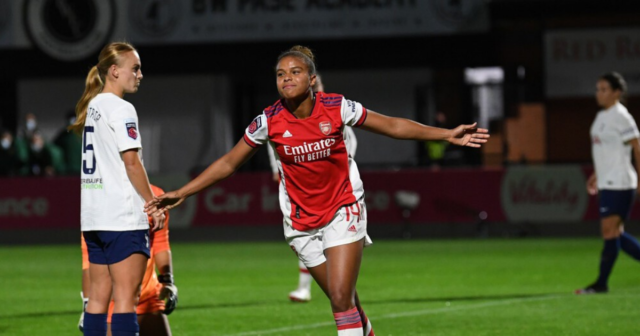 NIKITA PARRIS and Mana Iwabuchi turned on the style as Arsenal survived a Women’s FA Cup scare before putting Tottenham to the sword.

The duo combined to clinical effect with Caitlin Foord with the trio netting four goals as the WSL leaders claimed their semi-finals spot in a 5-1 win.

The result saw Arsenal go unbeaten in 19 games across all competitions since losing to Chelsea in February.

And it brought them a step closer to their dream of winning the contest for the fifteenth time with a semi-final duel with Brighton next.

Gunners boss Jonas Eidevall said: “It feels like we’re scoring a lot at the moment, and we look so threatening in our offence, but I think we can be a lot better still.

“But from a results perspective and the way we look in attack sometimes it’s excellent, but I still think there are some areas we can improve.

“I think it’s about the consistency, to be honest.

“We’re at a really, really high level, but there are maybe one or two percentages we can get better at. It’s more about being consistent over 90 minutes

Rehanne Skinner’s gutsy Spurs side – currently unbeaten in the league – began the game brightly taking the fight to their hosts.

And they momentarily silenced the home fans with Rachel Williams walloping home a left-footed fifth-minute strike past an outstretched Lydia Williams.

And the trio of Nikita Parris, Mana Iwabuchi and Tobin Heath who all started proved to be just as deadly in attack.

And it was England forward Parris who came close to levelling for the home side as she jinked her way into the box before her sixth-minute shot was blocked.

But the slim lead of Skinner’s players evaporated when Iwabuchi showed some deft control as she squeezed the ball past Josie Green to thump in Arsenal’s equaliser. 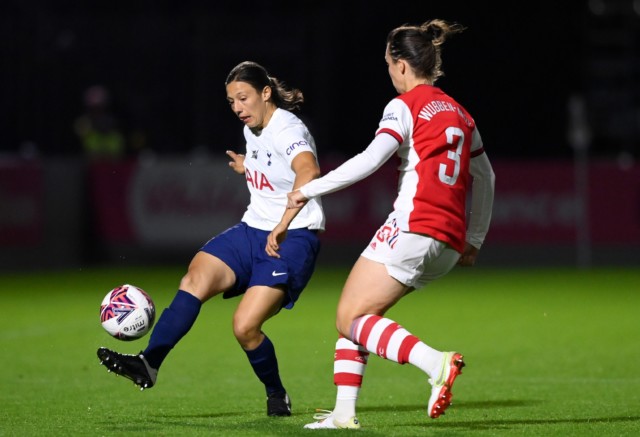 Rachel Williams stunned the hosts with an early opener for Tottenham

The Gunners, now dominating their opponents, took the lead moments after the half-hour mark.

This came via a dangerous Heath cross from the left bouncing into the goal off Tottenham starlet Asmita Hayle.

And Arsenal increased their tally to three in the thirty-third minute courtesy of Caitlin Foord’s first of the evening.

The Australian netted off the back of a Nikita Parris’s cross following a lovely one-two between Iwabuchi and Parris on the edge of the 18-yard box.

There was no let-up from the hosts who were relentless in attack in the first half’s closing stages.

Their fourth goal came through Parris heading the ball home over Spence in the forty-fourth minute. 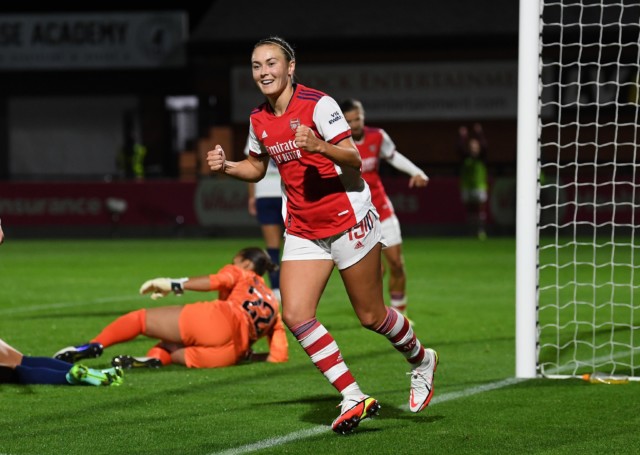 The second half saw summer signing Frida Maanum come on for Lia Walti.

But the visitors conceded again when Caitlin Foord poked home her second of the evening following a pinpoint cross from substitute Beth Mead.

And the Gunners saw out the 5-1 win ahead of their league clash against Aston Villa next following by their Champions League duel with Barcelona.

And they have a trip to Leicester up next with the Foxes yet to pick up a win in the top-flight. 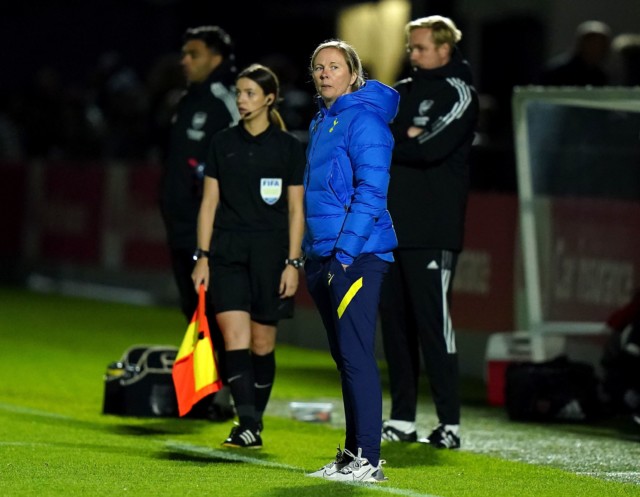 Skinner said: “Arsenal are a fantastic side and we’re in a growth phase where we’re trying to get to the point where we can compete with that on a regular basis

“It’s a cup game anyway so it’s always got a different feel to it.

“But when we get going into the weekend, it’s certainly a big focus on the league and that’s going to be the main thing that we talk about from this point forwards.