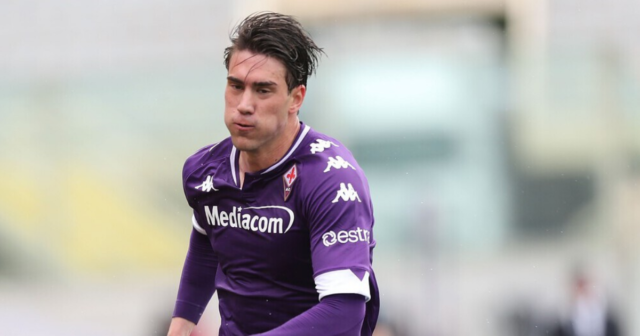 ARSENAL and Man City have received a huge transfer boost with Fiorentina’s chief admitting Dusan Vlahovic could leave the club if he does not sign a a new deal.

The 21-year-old Serbian striker is one of Serie A’s best young talents and has been heavily linked with a move to the Prem after emerging as a target for both Man City and Arsenal over the summer.

Vlahovic netted 21 goals in 37 Serie A games for Fiorentina last season and was reportedly a target for Spurs should Harry Kane have left for Man City.

LaLiga winners Atletico Madrid also had an offer of £51million rejected for the player before sealing the return of Antoine Griezmann from league rivals Barcelona.

Despite all of the speculation, however, Vlahovic confirmed on deadline day that he would be staying at the Stadio Artemio Franchi this season.

Fiorentina are desperate to keep hold of their prized asset, but chief Rocco Commisso has now admitted that the Serbian could be sold for the right price.

Speaking to TGR Rai Toscana via Football Italia, Commisso said: “The right offer has not arrived.

Vlahovic’s current deal expires in June 2023 and the club will hope to tie him down to a more long-term deal to maximise his value and guard against the possibility of him leaving for free.

Regarding a new contract, Commisso told Calcio Mercato. “I hope he will stay for a long time. Will he sign the new contract? I won’t make promises I am not certain that I can keep.”

With Arsenal scoring just once in their four Prem games so far, Mikel Arteta will be desperate for more goals and could be persuaded to move for the Serbian sooner rather than later.

Pep Guardiola has joked to the media about his side not needing a striker after scoring 11 goals in their four Prem games and putting six past RB Leipzig in the Champions League.

But with Vlahovic’s impressive goalscoring record, Man City are unlikely to pass up on the opportunity to sign such a promising young talent if he becomes available.

The 10-cap Serbia international already has five goals in just four appearances this season, with Fiorentina winning two of their opening three games in the Serie A.

Did you miss our previous article…
https://www.sportingexcitement.com/football/premier-league/chelsea-ace-reece-james-21-reveals-shocking-cctv-as-cowardly-thieves-break-into-his-home-and-steal-safe-with-medals