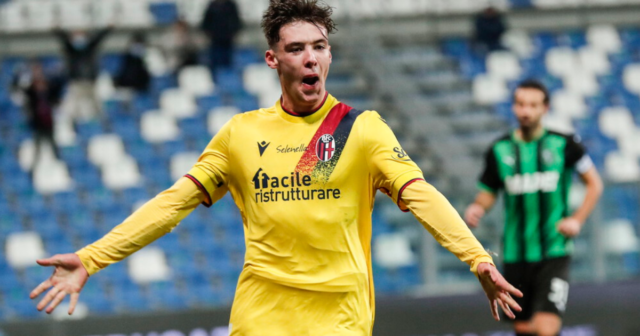 ARSENAL have reportedly been dealt a blow in their pursuit of Aaron Hickey with the Bologna left-back set to join Brentford in a £14million deal.

The 20-year-old has been linked with a move to the Emirates this summer with Mikel Arteta keen to bring in a back-up for Kieran Tierney.

But they have always been in competition with the Bees in the race to secure the services of the Scotland international.

And it appears that Thomas Frank’s side have won the battle where Hickey will compete with Rico Henry for a starting spot as opposed to being Tierney’s deputy.

According to transfer guru Fabrizio Romano, the West London outfit could announce the signing of the defender next week after his medical.

He tweeted: “Brentford are set to sign Aaron Hickey on permanent deal.

“Scottish talented fullback will join for £14m plus add-ons to Bologna. Five-year deal agreed… and here we go.

“Hickey will travel to England next week in order to undergo medical tests and sign.”

Bologna’s newly-appointed sports director Giovanni Sartori revealed earlier on Saturday how Hickey was set to depart the Serie A side.

He said: “As far as the outgoing market is concerned, the two players who will be leaving our club at the moment are Aaron Hickey and Matias Svanberg.”

Arsenal have prioritised a move for Ajax’s versatile defender Lisandro Martinez over Hickey in recent weeks.

SunSport exclusively revealed how the Gunners had tabled a £34m bid plus add-ons for the 24-year-old, who can play as a centre-back, left-back or defensive midfielder.

But in what could be another blow for Arteta, the Argentine international could opt to follow former boss Erik ten Hag to Manchester United.

The Red Devils are believed to have launched a £39.6m offer as they look to hijack Arsenal’s move for the player.

Did you miss our previous article…
https://www.sportingexcitement.com/football/premier-league/mo-salah-shows-off-ripped-physique-on-beach-in-mykonos-after-agreeing-400k-a-week-contract-extension-at-liverpool/