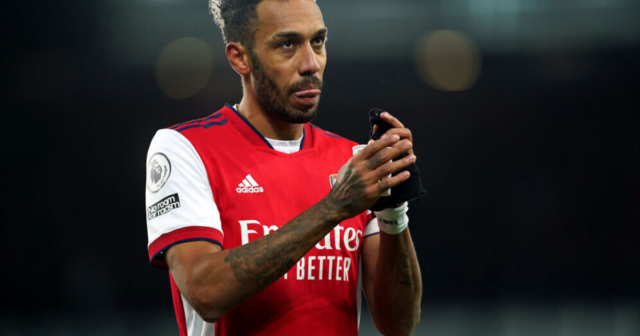 PIERRE-EMERICK AUBAMEYANG has been backed to return to top form at Arsenal by club legend David Seaman.

Aubameyang, 32, was left on the bench for the Gunners‘ 2-1 defeat at Everton on Monday night.

And once he did finally get on the Gabonese striker missed a last-kick chance at Goodison that consigned Mikel Arteta and his team to their third successive away defeat.

That came after the Arsenal captain was replaced by Alexandre Lacazette in the 79th minute at Old Trafford on Thursday night as he produced another subdued display as the North London side lost 3-2.

His current poor form continues the downward spiral the striker has been on ever since he signed his £350,000 per week, three-year contract in September 2020.

He has only found the net ten times in the Premier League since penning that deal.

But despite rumours of a rift between boss Arteta and the club’s highest-paid player, Arsenal and England’s former goalkeeper is adamant the ex-Borussia Dortmund man can rediscover his goalscoring form.

“I think it’s just the fact he’s not playing very well and he’s having one of those patches.”

Seaman added: “He’s just really low in confidence. He needs to get out on that training field and really practice his finishing, get confidence from training.

“We all know he can do it because we’ve seen him do it in the past.

“We’re just waiting for that little boost and hopefully he gets a two-foot tap-in and that brings his confidence back.”