Arsenal FIFA 21 player ratings: Partey, Aubameyang and Saka stars to watch out for as Ozil stats drop after exile
Advertisement 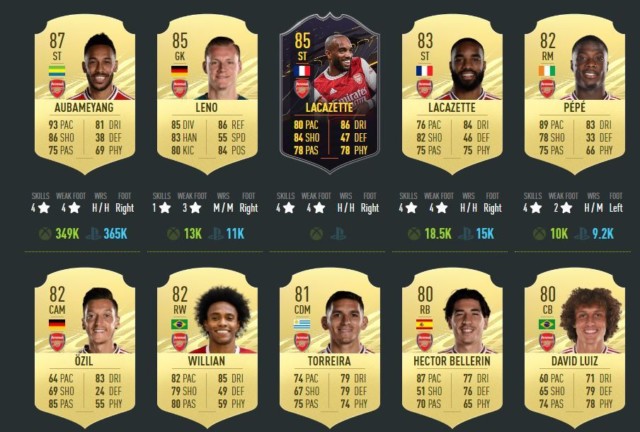 ARSENAL’S players ratings for the upcoming FIFA 21 have been confirmed with Mesut Ozil’s rating taking a hit.

In contrast, new signing Thomas Partey, Pierre-Emerick Aubameyang and Bukayo Saka stats have shot up and are the ones to watch out for.

Ozil’s rating has dropped from 83 last year to 82, alongside Nicolas Pépé and Willian.

Partey comes in at a strong 84 and leading the pack is striker Aubameyang who is 87 on FIFA 21.

The German midfielder has gone from 86 to 82 in recent years but is still one of the club’s highest ranked players.

Despite being downgraded, his passing is 85 and dribbling is 83 fans will be pleased to know.

He comes in with at bang and has been given a rating of 84, making him the highest ranking midfielder at the Emirates.

His strongest assets are his defending which is 82, and physicality which is 85.

Aubameyang will be Arsenal’s top-rated player on FIFA for another season.

His best attributes this season is his sprint speed and his positioning, which have been ranked 94 and 93 respectively. 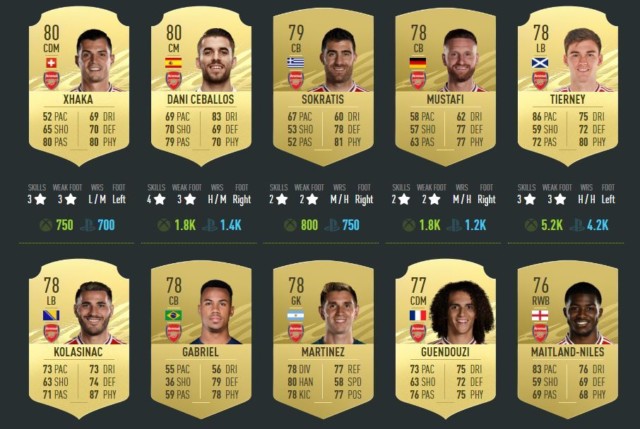 Arsenal fans are upset some players have been ranked so low

The youngster’s ranking has seen a big jump from FIFA 20 where he was given a modest 65.

After some impressive displays he rose to a 74 throughout the season.

This year his ratings see a slight improvement and he comes in at 75.

His biggest strengths are his acceleration which is 86, and his sprint speed 82.

Saka has shot up dramatically in his rankings from last season

Some Arsenal fans were left fuming when the FIFA 21 ratings were released, as they believe their club has drastically improved under boss Mikel Arteta.

Did you miss our previous article…
https://www.sportingexcitement.com/football/premier-league/what-happened-to-arsenals-british-core-after-iconic-2012-image-with-wenger-including-jack-wilshere-and-carl-jenkinson