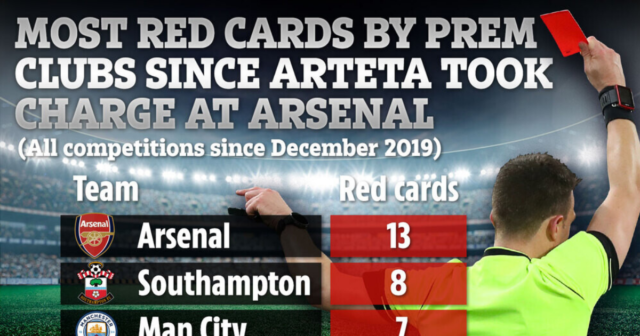 GRANIT XHAKA’S sending off against Liverpool on Thursday took Arsenal’s tally to THIRTEEN red cards in the Mikel Arteta reign.

Xhaka was given his marching orders for a waist high kick on Diogo Jota in the 0-0 Carabao Cup semi-final first leg stalemate at Anfield.

The sending off was Arsenal’s thirteenth in all competitions under Arteta – FIVE more than any other Premier League team.

Arteta took over in December 2019, so in just a little over two years the Gunners have been shown nearly double the amount of red cards as anyone else.

Southampton are the next most ill-disciplined team with eight reds, but the Saints are nowhere near Arsenal’s tally of thirteen dismissals.

Luckily for Xhaka his latest moment of madness at Anfield didn’t end up being too costly, as his team-mates rallied to cling on for a valuable clean sheet.

It was exactly the type of steely, gritty performance that has been missing from Arsenal’s game in recent years.

Summer signing Ben White scooped man of the match for an excellent display at the back, but to a man the Gunners were superb.

And it means it’s all to play for going into the second leg at the Emirates next week.

Xhaka himself apologised to Arsenal fans after the game for potentially costing his side the tie.

He wrote: “I want to apologise to everyone. I am so proud of my team and the spirit that they showed to keep a clean sheet tonight.”

Arsenal’s thirteenth sending off under Arteta comes just days after they set the unwanted record of being the first team in the Premier League to the milestone of 100 league red cards.

And on that occasion it did cost them, as the Gunners threw away a first-half lead to lose 2-1 at home to Manchester City.