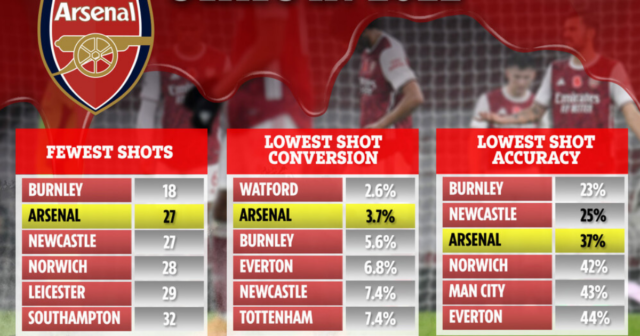 ARSENAL have incredibly had more red cards than goals scored in 2022 as they search for their first win of the year.

Mikel Arteta‘s side have played five times in all competitions this month, resulting in them being knocked out of both domestic cups.

The Gunners were stunned by Nottingham Forest at the City Ground as the Championship outfit won 1-0 to knock them out of the FA Cup in the third round.

Meanwhile Liverpool beat the North Londoners 2-0 at the Emirates last Thursday in the Carabao Cup second leg after the goalless draw in the first match.

And Arsenal have dropped down into sixth in the Premier League following their 2-1 defeat against Manchester City and 0-0 draw with Burnley on Sunday.

It should come as no surprise that Arteta is desperate to land a striker with the club struggling in attack.

Arsenal have scored just once in 2022 through Bukayo Saka’s opener against the Citizens on New Year’s Day.

But they are yet to find the back of the net since from their next four games.

Only Burnley had had fewer shots in the Premier League than Arsenal’s 27, though 20 of those came against the Clarets.

And Arsenal also boast the second lowest shot conversion from all 20 teams having scored just 3.7 per cent of their attempts on goal.

They are also third bottom on lowest shot accuracy, with just 37 per cent of their strikes hitting the target.

And in a stat that Arteta will quickly want to be gone, Arsenal have had THREE red cards already this year.

Gabriel was sent off against City, Granit Xhaka was given an early bath at Anfield with Thomas Partey shown two yellow cards in the return fixture against Liverpool.

No other side in the English top-flight has received more than Arsenal’s 14 red cards since Arteta’s appointment.

The former Everton midfielder hit out at his side last week as he urged them to ‘eradicate’ their disciplinary issues on the pitch.

Arsenal fan Piers Morgan believes that Arteta’s future at the club should be in question if they finish in the top four, despite the Spaniard set to be offered a new two-year deal.

He said: “Arsenal will finish January with more red cards than goals in the month, an extraordinarily damning statistic.

“And spare me all Arteta’s excuses about Covid, injuries and suspensions — every club’s had the same problem during this  pandemic, and eight of his first-choice XI played on Sunday.

“As for his penchant for wielding the under-performance punishment sword, the time is fast approaching when it may need to be wielded  on him.

“For all his tough guy talk and endless “trust the process” bull****, Arteta’s so far been a demonstrable failure at Arsenal.

“He’s been in charge for two years and 114 matches now — and has a win record of just 53 per cent, less than Wenger’s, whose last decade was woeful, and Unai Emery’s.”

Before adding: “If we don’t make the top four this season, and even that “achievement” seems such a lowly ambition for a  supposed big club, then he shouldn’t be given a pay rise, he should be sacked.”