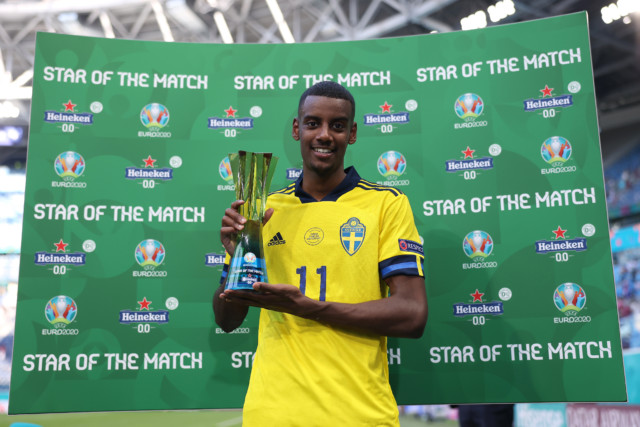 ARSENAL are joining the transfer race for Sweden’s Euro 2020 star Alexander Isak, according to reports.

The Real Sociedad forward, 21, has yet to hit the target at the tournament but has proven his potential with three impressive performances.

Arsenal are preparing to make their move for Alexander Isak

Real Madrid are one of the teams interested and have reportedly made contact with the player’s agent.

But AS write how Arsenal have stolen a march, having also spoken to the Swede’s representatives.

The Gunners want to determine whether Isak would be eager to make the switch to London before making their move.

The report adds how Arsenal would even be willing to match his release that currently stands at £59million.

Isak still has three years left on his deal in Spain but Real Sociedad are keen to offer him an improved deal and raise his release clause to £76m.

Arsenal boss Mikel Arteta is eager to land a new, young striker as he looks towards the future.

Alexandre Lacazette, 30, currently has just a year left on his contract while 32-year-old Pierre-Emerick Aubameyang scored just 10 times in the league last season.

Sweden boss Janne Andersson told SunSport before the tournament how he expected Isak to be a star of the Euros.

He said: “Alex has had a very good season in Spain and has performed well for us as well.

“He made his first appearance with us in 2019 and has been improving a lot since then. There are many good players at the Euros but Alex is a player that has the quality to make a big impact in the tournament.”