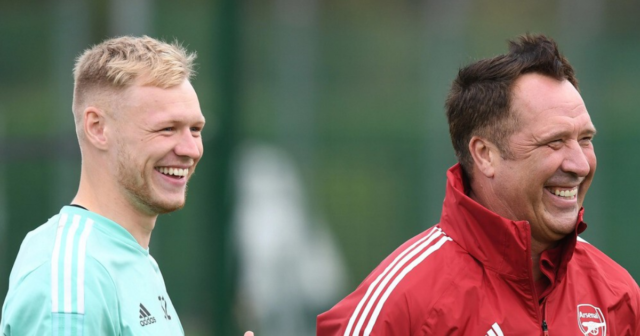 DAVID SEAMAN has backed Aaron Ramsdale to prove his doubters wrong at Arsenal after being ‘really impressed’ by the goalkeeper.

Aaron Ramsdale and David Seaman have spent time together at London ColneyRamsdale, 23, has dislodged Bernd Leno as Gunners No1

But after dislodging Bernd Leno as No1, the former Bournemouth and Sheffield United stopper has kept four clean sheets in seven games.

Having seen the 23-year-old up close, Seaman believes that he is a ‘great character’.

The Arsenal legend told the Mirror: “I have seen him [Ramsdale] in training and in games as well, and I’m really impressed.

“He’s improved a lot. He’s got a great character and looks to be settling well.”

Seaman, 58, then compared Ramsdale’s arrival to his own from Queens Park Rangers in 1990.

He added: “A lot of Arsenal fans weren’t too sure about him [Ramsdale] signing but he’s proved them wrong so far.

“It reminds me lot of what I was used to when I joined Arsenal.

“The fans all used to sing that ‘John Lukic is better than David Seaman’.

“I remember them saying ‘you’d never play for Arsenal’ and I proved them wrong!”

Ramsdale experienced back to back relegations with Bournemouth and then Sheffield United in the last two seasons.

But he is yet to lose any of his seven games between the sticks for the Gunners to date.

Did you miss our previous article…
https://www.sportingexcitement.com/football/premier-league/theres-no-way-back-for-solskjaer-now-even-if-man-utd-dont-sack-him-he-should-resign-after-liverpool-humiliation