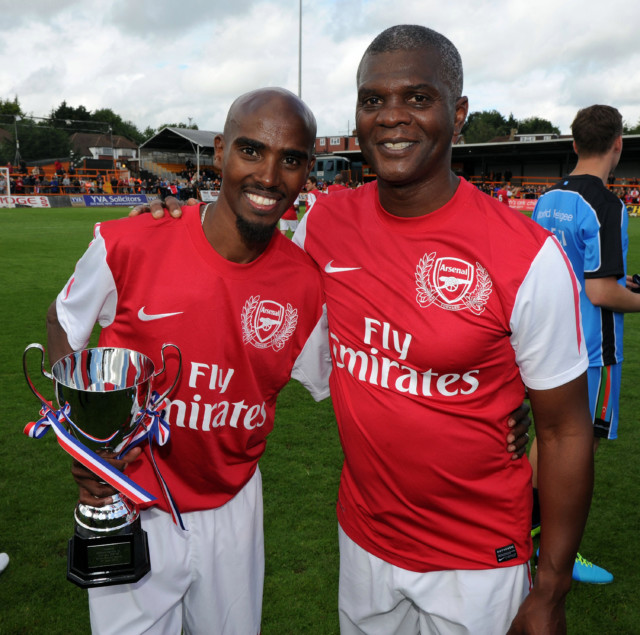 ARSENAL hero Paul Davis has lifted the lid on the vile racist abuse that black players were subjected to in the 1980s.

Davis claims being taunted over the colour of his skin was common place as he made his way in the game — with London grounds like Stamford Bridge and Upton Park a hotbed for bigots.

Arsenal hero Paul Davis, pictured with Mo Farah, has opened up on the vile racist abuse he suffered during his playing career

Former midfield star Davis admitted in the explosive new book, Arsenal Match of My Life: “Things were very different in the 1980s.

“It was tough because there were times when I felt different because of the colour of my skin when I was the only black player in the team or the only black person in the room.

“I had to just deal with it in order to get to where I wanted to in my career.

“There were certain grounds I used to dread going to, Chelsea and West Ham in particular, and anywhere up north was proper bad — Leeds, Liverpool, Everton, Sunderland, Newcastle.

“The Midlands were not too bad, maybe because West Brom had Laurie Cunningham, but everywhere else it was pretty strong stuff you were subjected to.

“One game in particular that stands out is when we played Chelsea at Stamford Bridge, which was not the best place for a black player.

“I remember being racially abused by 50,000 Chelsea fans and all I could do was try to ignore it and play my game.

“What really shocked me was they had a black player named Paul Canoville on their bench. I remember thinking, ‘Wow. If it is bad for me, imagine what it is like for him’. 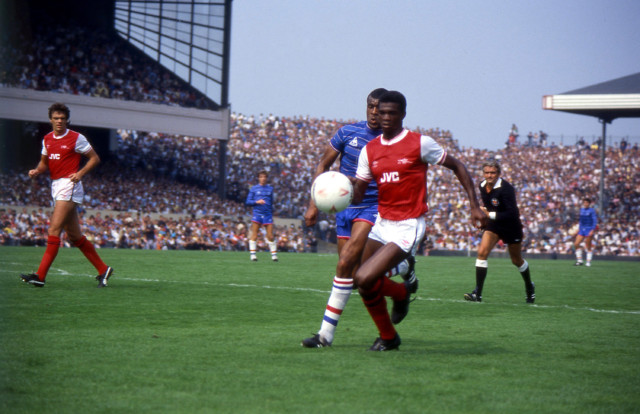 “It must have affected him because he was just a young player trying to make his way in the game. I followed his career after that but it never really went anywhere.”

Davis made his Arsenal debut at North London rivals Tottenham as a teenager — but claims it would have been too frightening for his family to attend the game.

He added: “I was only 17 when I got the tap on the shoulder from manager Terry Neill to tell me I would be starting at White Hart Lane and that my job would be to stifle the great Glenn Hoddle.

“We did not have mobile phones back then so I could not really call my family to tell them the good news.

“I did manage to contact my mum and she was delighted for me but she did not drive and lived too far away.

“It would also have been a bit scary for her in those years going to a match on her own, particularly at Spurs, so it was never an option.”

Davis says racism was just part and parcel of being a professional player in his era and has praised England ace Raheem Sterling for being brave enough to stand up to his abusers.

Manchester City forward Sterling was called a ‘f***ing black c**t’ by a Chelsea fan during a televised game in 2018 — before releasing a powerful message on social media condemning racism.

Davis said: “The sad fact is that this kind of behaviour was accepted then and the football authorities did not do enough to stop it.

“I needed all the mental belief that I had and the ability to rationalise things to work my way through it.

“Speaking to a lot of other black players, they did the same. You cannot really fight that kind of scenario.

“It was not a great situation but if you got bitter or angry it would only have taken away from what you were trying to achieve.

“I look at people like Raheem Sterling and realise players now are stronger and have more power and more voice but there is still only so much they can do.”

Davis played more than 400 games for Arsenal, winning two league titles, the FA Cup and the 1994 European Cup Winners’ Cup before going on to become an ambassador for Kick it Out and Show Racism the Red Card.

Trailblazer Davis added: “I was the first black player to play for Arsenal for any prolonged amount of time.

“I did not realise then but I do now, that the Caribbean community in London were following my progress and wanting me to do well. 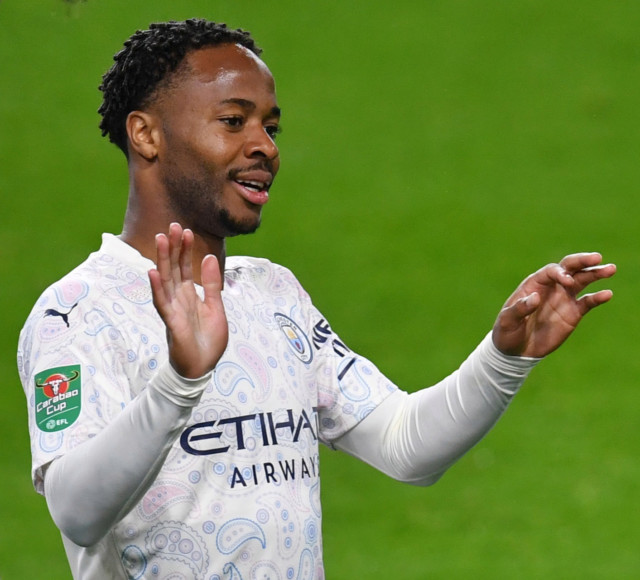 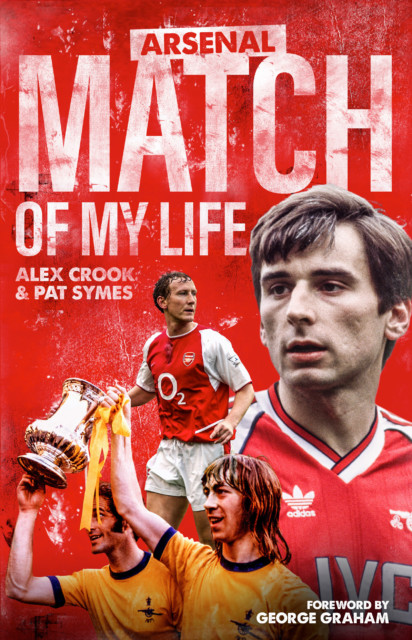 “They were frightened of going to games because of the climate in the country but I look at the number of black Arsenal supporters who go now and I believe that is where it started.

“That community felt they could connect with me and, in later years, David Rocastle and Michael Thomas.

“Even now people often come up to me and say, ‘We support Arsenal because of you’. That is so gratifying and so rewarding. I feel really proud.”

Did you miss our previous article…
https://www.sportingexcitement.com/football/premier-league/man-utd-hope-to-find-loophole-in-covid-rules-to-help-edinson-cavani-avoid-two-week-quarantine